The Archaeology of Knowledge

As much as one wonders at the paintings reproduced in Francis Bacon (edited by Matthew Gale and Chris Stephens), the catalogue to the Tate Britain exhibition celebrating the centennial of the birth of the painter Francis Bacon, perhaps even more fascinating are the photographs of Bacon’s studio, which has become as much a shrine as an archaeological dig site for fans and scholars since the artist’s death in 1992. “The veil of myth has become attached to the discarded photographs, loose leaves and books, boxes and scraps of clothing,” Gale and Stephens write in their essay, “On the Margin of the Impossible,” of what they call a “composting of detritus.” In many ways, Bacon’s studio served as a physical analogue for the workings of his mind, which could pull together disparate elements across different fields and arrive at works such as Triptych Inspired by T.S. Eliot's “Sweeney Agonistes” (above, from 1967). In this catalogue, Gale and Stephens gather together essays that pick up “these fragments” Bacon “shored against” his “ruins,” to borrow a phrase from Eliot’s The Waste Land, and try to piece together into understandable form an artist always greater than the sum of his parts. “I would like my pictures to look as if a human being had passed between them,” Bacon once famously said, “like a snail, leaving a trail of human presence and memory trace of past events, as the snail leaves its slime.” This catalogue and exhibition follow hot on the trail of Bacon’s humanity—the sublime, the tragic, and, yes, the sometimes slimy. 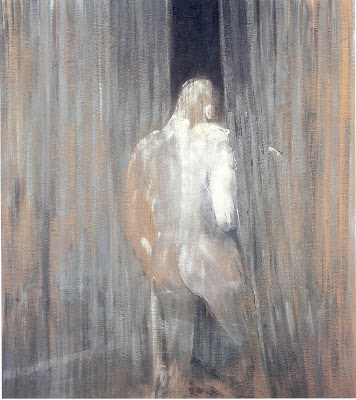 Martin Harrison tackles the issue of Bacon’s take on art history in his essay, “Bacon’s Paintings.” “Francis Bacon’s relationship with art of the past was dynamic, if complicated,” Harrison writes with great understatement. Bacon openly admired works by Honore Daumier, El Greco, and a host of others. Not only did Bacon lean heavily upon Diego Velázquez’s Portrait of Innocent X in creating Study after Velázquez's Portrait of Pope Innocent X (1953), but he also saw Velázquez’s Rokeby Venus as instrumental in his development. “If you don’t understand the Rokeby Venus you won’t understand my paintings,” Bacon claimed, thinking perhaps of works such as Study from the Human Body (above, from 1949). As Harrison points out, Bacon embraced the old masters more as he gained fame and actually distanced himself from more modern influences he once praised, such as Henri Matisse and Chaim Soutine. Bacon consciously scripted how art history would see him. “Bacon professed to be indifferent to the interpretations attached to his paintings,” Harrison asserts, “yet he suppressed texts of which he disapproved.” As Victoria Walsh writes in her essay, “Real Imagination Is Technical Imagination,” “Bacon created his own translator in David Sylvester,” the British art critic who eventually became Bacon’s confidant and semi-official critical outlet. The 16 years that now stretch between today and Bacon’s death provide the necessary space for these critics to step away from Bacon’s looming presence in the art world in life to more clearly see his work in death.

Although critics early on recognized Bacon’s debt to the movies in his works, that connection remains a fascinating source of new insights on the artist. David Alan Mellor’s “Film, Fantasy, History in Francis Bacon” traces Bacon’s love of film back to the very beginning of the modern cinema, when the 13-year-old Bacon saw D.W. Griffith’s Intolerance (1916) in 1922. Bacon studied the work of all the great early directors, including Abel Gance, Fritz Lang, and Sergei Eisenstein. The artistry of these directors challenged the other visual arts to keep up. “Film had stolen something of the vitality and the powers of disclosure of painting,” Mellor writes, “it could transcribe history.” Bacon looked to steal back the magic of painting from film. Mellor connects many of Bacon’s works to specific film moments. Critics have long analyzed Bacon’s repeated use of the “screaming nurse” from the Odessa Steps sequence of Eisenstein’s Battleship Potemkin, but Mellor points out the connection between the triptych technique of Three Studies for Figures at the Base of a Crucifixion (above, from 1944) and the cinematic triptych technique used by Abel Gance in the climax of his 1927 masterpiece, Napoléon. Bacon clearly internalized many of the images he saw flicker before him over the years, and Mellor digs into that past to resurrect lost influences such as Gance, one of the many great silent film directors who have nearly disappeared thanks to the physical disappearance of their films.

In his essay “Comparative Strangers,” Simon Ofield touches upon the issue of Bacon’s homosexuality and his art. Researching the men’s magazines and bodybuilding magazines that Bacon mined for visual inspiration, Ofield sees these magazines as “making connections between photographic images and certain (and uncertain) knowledges of social, sexual and aesthetic practices and pleasures.” Such publications served as “places where desire took shape—sites of production and seduction,” Ofield writes. Bacon allegedly indulged in the bad-boy fantasy, most famously in his tragic relationship with petty criminal George Dyer, subject of Triptych—In Memory of George Dyer (above, 1971), painted after Dyer’s suicide. Dyer’s tribute goes beyond pure homosexual love and incorporates Bacon’s interest in painting from photography, as he had used snapshots of his former lover in painting the piece. Bacon saw the world through photos, Gale and Stephens suggest, “as if, by viewing photographs, one inevitably reviewed reality more intensely.” The blurring of candid snapshots caused by motion also involved Bacon’s beloved idea of chance. In the Dyer triptych above and many other works, Bacon “harness[es] chance gestures,” believing that “chance is not simply an artistic strategy but a fundamental part of an attitude to life,” Gale and Stephens write. Placing faith in chance rather than some idea of god, Bacon “sought to express what it was to live in a world without God, a state of existence that was merely transitory without reason or afterlife.” Stealing a page from Nietzsche, Bacon found a way to be an optimist in a world constantly aware of its own death. 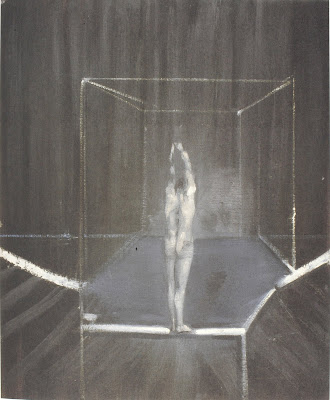 Bacon once called the sum of his work, “The History of Europe in My Lifetime.” The twentieth century’s long parade of inhumanity that marched past Bacon’s view fed his visual imagination as it shaped his soul (if he acknowledged the existence of one). “I think of myself as a kind of pulverizing machine into which everything I look at and feel is fed,” Bacon once revealed. This wide-ranging catalogue and exhibition de-pulverize much of what Bacon digested and recreate the artist as a young man, before fame formed the brand name of “Francis Bacon” and he began to shape his own legacy by force of sheer will. Bacon’s style, sexuality, and subject matter will certainly dissuade and attract viewers, but the reality of his work demands some response from each of us who know that the history of his lifetime found in his works is the history of our own, or at least the history of what shapes our world today. Like a fine team of archaeologists, Gale and Stephens dug deep into the subject of Francis Bacon and exhumed not only the artist but the man and mind behind the art.

[Many thanks to Tate Britain for providing me with a review copy of Francis Bacon (edited by Matthew Gale and Chris Stephens) and for the images above from the exhibition.]
Posted by Bob at 12:01 AM