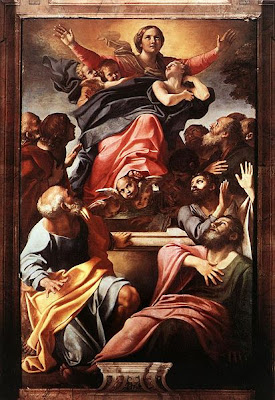 Most visitors to Santa Maria del Popolo in Rome gravitate almost immediately to the paintings on the side walls—The Conversion of Saint Paul on the Road to Damascus and The Crucifixion of Saint Peter—works instantly recognizable as the work of the Baroque bad-boy genius Caravaggio. Between those two strikingly dark works of rabid realism rises above the altar the Assumption of the Virgin Mary by Annibale Carracci (above). Baptized November 3, 1560, Carracci’s crowded, light-filled composition actually was the plum job in the chapel, yet today it and Carracci’s work in general are overshadowed by Caravaggio’s dramatic shadows as much as by his tempestuous life story. Whereas Caravaggio took painting into a darkly realistic direction after the Renaissance, Carracci sought to salvage some of the lessons of Michelangelo and Raphael, his heroes, and adapt them for the Counter-Reformation age. While Caravaggio painted prostitutes and beggars as the Virgin and the apostles, Carracci looked to his heroes for models for his lofty vision. 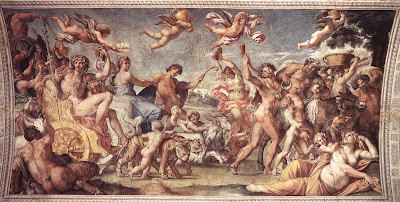 From 1597 through 1600, Carracci worked on a series of frescoes for the Palazzo Farnese in Rome. Drawing inspiration as much from the Farnese Hercules in the owner’s collection as much as from Michelangelo’s Sistine Chapel ceiling, Carracci painted such works as The Triumph of Bacchus and Ariadne (above, from 1597-1600). Using all the optical trickery of the new wave of perspective, Carracci kept his work up to date while still maintaining the grand fresco tradition of the Renaissance past. The hypermuscular figures ranging across Carracci’s frescoes recall Michelangelo’s beefed up Biblical figures and ancient sibyls while simultaneously honoring the classical sources Michelangelo and Carracci both knew first hand. The taste for grand fresco style, with the notable exception of Michelangelo’s work, no longer exists today, perhaps a side effect of the end of the age of kings thanks to the modern march of democracy. Caravaggio never worked in fresco, preferring to stay as earthbound as his style itself. Carracci, however, wanted to rise above and consort with his hero Michelangelo, at least metaphorically. 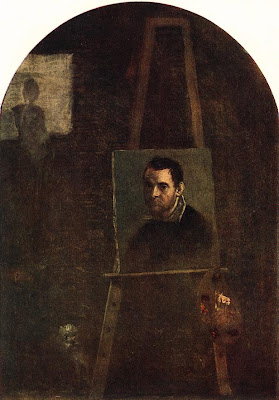 Towards the end of his life Carracci fell into a deep, paralyzing depression. His Self-Portrait of 1604 (above) reflects this dark mood. Did Carracci begrudge Caravaggio his fame and influence—the squadron of Caravaggisti that spread the style across all of Europe shortly after his death? Domenichino, Carracci’s prize student, carried on Carracci’s grand fresco style long after the teacher stopped working. Rubens and Poussin would later praise Carracci’s work in the next generation of European artists. After years of immobility, Carracci died in 1609. Per his request, his students buried Carracci’s remains near those of Raphael so that he could continue to mingle with genius for all eternity. Carracci’s face in the self-portrait on the easel in the larger self-portrait haunts in a way that a simpler self-portrait never could. By placing his portrait in the larger context of the studio, Carracci says that his studio is as much a part of him as his face. When changing tastes threatened to take away that essence from him, Carracci put down his brush and simply ceased to be.