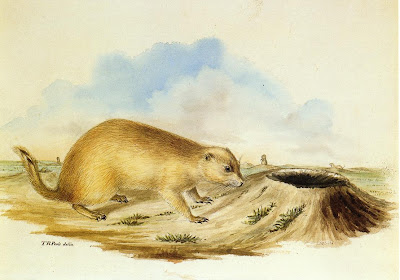 Working for his father Charles Willson Peale in the Peale Museum, Titian Ramsay Peale seemed destined to be both an artist and a naturalist. Born November 17, 1799, Titian, like his brothers Raphaelle, Rembrandt, and Rubens and his sister Angelica Kauffman, found himself named after a great artist of the past by their father. Merging his love of art with his love for nature, Titian concentrated on painting the specimens in his father’s museum, some of which came from the Lewis and Clark Expedition. When Lewis and Clark boldly went where few white men had ever gone before, they did the best they could with what little knowledge they had. Confronted with a creature they had never seen before, Lewis and Clark took a guess and the name “prarie dog” was born. Of course, the prarie dog is actually a kind of rodent, but that didn’t matter to Titian when he painted a watercolor of the taxidermied prarie dog (above, from 1819-1821). Titian’s scientific bent and highly trained aesthetic eye result in a wonderful approximation of what the furry critter may have looked like in situ. 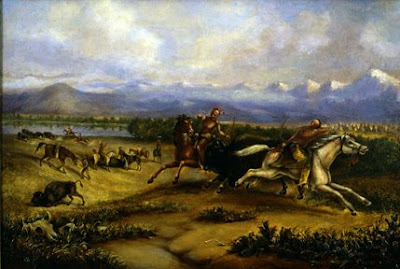 Because of his unique training, Titian found himself highly sought after for scientific expeditions. In 1818, Titian joined an expedition to the South Platte River to record specimens of birds, mammals, reptiles, fish, and insects. Spending time in what is now Colorado and Nebraska, Peale also observed the local Native American tribes, which included the Apache, Cheyenne, Comanche, and Shoshone. In 1873, Titian revisited the subject of Indians in Buffalo Hunt on the Platte (above). Even as late as 1873, when the Indian Wars still raged in the American West, Titian still paints the Native Americans with scientific objectivity, neither lionizing nor demonizing them. Although Titian remains a realist, there’s a great painterly sense of rhythm in Buffalo Hunt on the Platte. The intervals of the mountains strung across the backdrop beat a counterpoint to the composition of the slanted planes on which the Indians hunt their prey. Titian himself was a skilled hunter, so he fully appreciated the difficulty of hunting buffalo and acknowledges the talents and, thus, the humanity of these tribesmen. 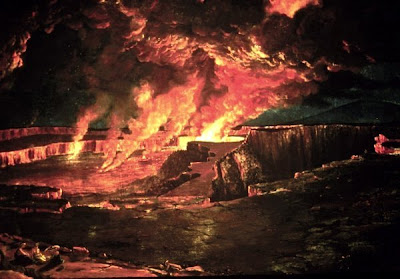 Titian joined the United States Exploring Expedition, 1838-1842 led by Lt. Charles Wilkes. Sailing the South Pacific as the expedition’s chief naturalist, Titian saw and painted a whole new world of natural wonders, including the active Hawaiian volcano Kilauea (above, from 1842). The fiery depths of Kilauea and the billowing dark clouds above the crater make it seem like a vision from hell in Titian’s hands. Titian Peale went on to become a pioneering photographer in America and belonged to the first photography club in the country. Later, Titan assisted his nephew Coleman Sellers in developing the Kinematoscope, an early version of the motion picture projector. Although Titian Peale was the youngest of Charles Willson Peale’s children, he may have been the closest to his father intellectually in terms of ranging far and wide in his need to see the world and capture it in images, whether using a brush or the latest technology, such as photography. As with his father, only death itself could stop Titian Peale’s exploration of the world.
Posted by Bob at 12:01 AM