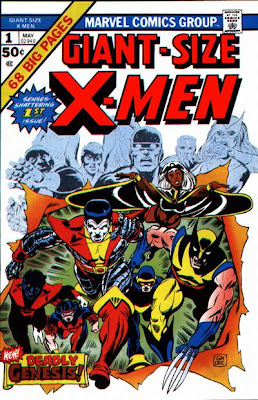 Growing up and reading superhero comics as a kid, certain artists jumped out at me—Neal Adams, Jack Kirby, John Buscema, Frank Frazetta, and others. Something with those artists just clicked with my sense of art at the time. As an adult, I find myself remembering artists that I took in unconsciously rising to the surface of my mind, such as Dave Cockrum. Born November 11, 1943, Cockrum’s work on the X-Men, such as his Giant Size X-Men #1 cover (above, from 1975), revitalized a dying title for Marvel Comics. Cockrum created the look for such characters as Storm, Nightcrawler, and Colossus and helped make the X-Men the lucrative cultural phenomenon they are today. Alas, as seemingly with all the great comics creators, Cockrum saw little of the money generated by his creations. When illness struck in 2004, Cockrum desperately needed help, which came in the form of friends Clifford Meth, Neil Adams, and other comic industry movers and shakers. Their efforts shamed Marvel Comics into acknowledging Cockrum’s contribution to the X-Men franchise and resulted in monetary compensation that helped Dave and his family in his final years. The man who excelled at creating groups of superheroes found himself on the receiving end of kindness from fans and peers on a superheroic scale. 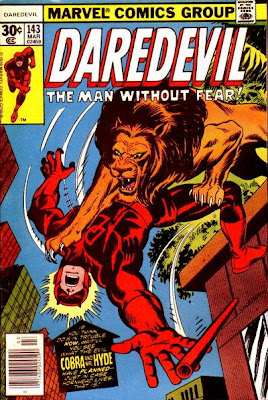 Although Cockrum’s work on X-Men and earlier on The Legion of Super-Heroes brought him the most attention, Dave’s occasional work on other Marvel Comics titles showed his versatility and dramatic sense of composition as well. In the cover to Daredevil #143 (above, from 1977), Cockrum shows the hero dramatically plummeting from a rooftop as a lion threatens to maul him. The plunging verticals of the composition give the picture an amazing sense of movement. The foreshortening of Daredevil’s hand as he reaches outside the picture plane for his billy club rivals similar effects used by Jack Kirby. Cockrum certainly fell under the influence of Kirby, as did so many artists of the 1970s, but you sense more influence than mimicking in Cockrum’s work. As a young man, Cockrum wrote insightful letters to the publisher of the Fantastic Four commenting on creations of Kirby such as the Inhumans. Years later, Cockrum found himself designing covers for that same title, a dream literally come true. 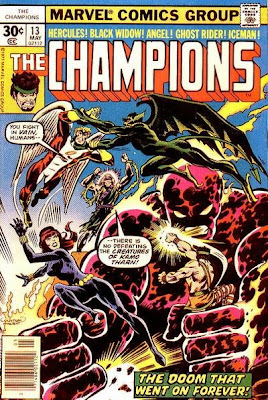 As a kid, I was a sucker for superhero teams—not just the biggies, like the Fantastic Four, the Avengers, and the Justice League of America, but hastily cobbled together groups such as The Defenders, The Invaders, and The Champions. Cockrum did his best to save what was a shaky union with art such as that on the cover of Champions #13 (above, from 1977). “Hercules! Black Widow! Angel! Ghost Rider! Iceman!” the covers breathlessly promised. I ate it up. The Champions lasted all of 17 issues, but I probably read more than half of them. Looking at the covers Dave Cockrum did for The Champions and other second-line titles, I find myself traveling back through time and remembering such books like old friends. As I said before, Cockrum’s talent seemed best suited to group efforts, usually sprawling compositions full of flailing limbs and laser blasts—a modernized version of a Baroque fresco of mythological figures duking it out. Dave Cockrum’s talent also inspired the group effort that rescued his best work from being lost in the wake of corporate maneuvering. Sometimes the good guys actually do win.

UPDATE: Clifford Meth has asked me to pass on the following announcement:

"On behalf of Dave Cockrum's widow Paty, I am in the process of grading hundreds of comics from Dave's personal collection collection. This includes Silver and Golden Age books, as well as many of Dave's personal file copies. Contact me at cliffmeth@aol.com if you're seriously interested."

If you're a comics fan, please consider helping out one of the great comics artists and getting a piece of history in the bargain.
Posted by Bob at 12:01 AM