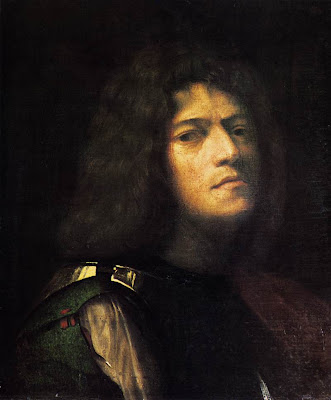 When Giorgio Barbarelli da Castelfranco died, most likely from plague around November 6, 1510, the man known better as “Big George” or Giorgione left behind more questions than he or his art ever answered. Born either in 1477 or 1478, the tragically young artist befuddled and astonished contemporaries by turns. In an age that called upon artists to express religious truths in imagery for all to understand, Giorgione instead worked in enigmatic shadow. His Self-Portrait as David (above), now just a fragment of the larger work showing the hero holding the head of Goliath, shows the young artist posing with an expression that pronounces neither triumph nor regret. Giorgione’s self-portrait could easily be mistaken for one of Gustave Courbet’s many self-aware, mysterious self-portraits—an amazing comparison considering that Giorgione painted roughly 350 years before Courbet. One of the prime contenders for “father of modern painting” remains Titian, yet Giorgione either taught or studied beside that innovator. Giorgio Vasari, a contemporary, believed that Giorgione and Leonardo da Vinci should share credit for founding modern painting. Such debates are irresolvable, but Giorgione’s role, whatever that may be specifically, remains undisputed. 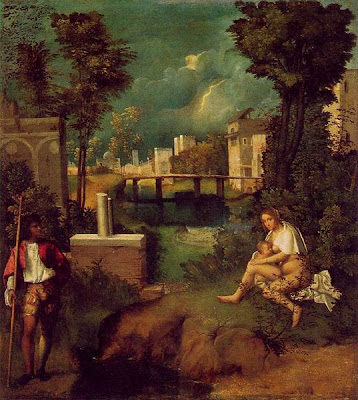 Giorgione broke all the rules in painting works that refused to tell a clear story—historical, religious, or mythological. Gabriele Vendramin, a leading intellectual in Giorgione’s Venice, commissioned Giorgione to paint The Tempest (above) in 1508. We all clearly see the woman and child on the right and the man on the left. Indistinct ruins as well as verdant vegetation surround them. A bolt of lightning splits the dramatic sky above them. What all that means, however, is engagingly unclear. Perhaps Giorgione painted The Tempest as a test for his patron—an intellectual puzzle with endless solutions, none of which could be “wrong.” Everything in the picture is natural and realistic, but Giorgione leaves them disconnected enough for us to fill in the blanks. Such fertile mystery informs the later landscapes of Nicolas Poussin and stretches even into modern times in the works of artists ranging from Giorgio de Chirico to Andrew Wyeth. In our modern (perhaps post-modern) world, we’re accustomed to such disconnect in our art, so it’s hard to fathom just how unfathomable Giorgione’s works such as The Tempest first seemed. 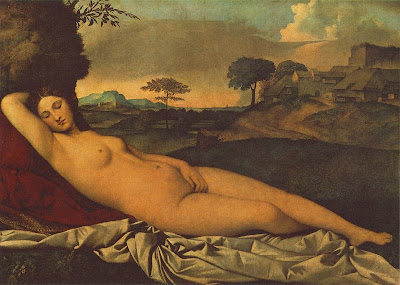 When Giorgione died, he left several works unfinished, such as The Sleeping Venus (aka, The Dresden Venus; above, from 1510). Titian finished many of these works, which has led to difficulties in attribution between the two. Decades later, in 1538, Titian returned to Giorgione’s Sleeping Venus by painting The Venus of Urbino. Whereas Giorgione’s Venus lushly stretches in her sleep, unaware of viewers and dreaming of things we can only guess at, Titian’s Venus confronts the viewer eye to eye, short-circuiting all the mystery. When Édouard Manet painted Olympia, the work that many feel launched the Impressionist movement and all the movements that followed, he may have fused visually Giorgione’s and Titian’s nude goddesses. Manet copied the direct stare of Titian, but he also conveyed the sense of mystery in Giorgione through details such as the black cat and maidservant. Some scholars believe that Manet’s Luncheon on the Grass, another key early work in modern art, owes much to Giorgione’s The Tempest in its strange, quiet mystery. Thus, Manet, another potential “father of modern art,” looked back to Giorgione and rediscovered unanswered questions that still fired the imagination.
Posted by Bob at 12:02 AM