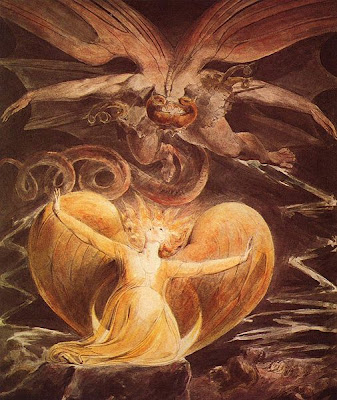 As I delved further and further into English poetry as a high school and college student, certain poets just grabbed me immediately with the power of their vision—W.B. Yeats, Gerard Manley Hopkins, and, perhaps above all others, William Blake. Born November 28, 1757, Blake could easily have served as the CEO of any visionary company. Songs of Innocence and Experience, Visions of the Daughters of Albion, The Book of Thel, The Marriage of Heaven and Hell, Jerusalem—all of those high-flying works of intense imagination by Blake left me enthralled not only by the words and ideas but how the same man could put those words and ideas into images and even sometimes undermine the written text with those paintings and etchings. Blake, of course, didn’t limit himself to illustrating just his own works. Many of the great visionary works of history received Blake’s special treatment. Studying the text of the twelfth book of Revelation, Blake painted a series now known as The Great Red Dragon Paintings, including The Great Red Dragon and the Woman Clothed with the Sun (above, from 1805). “And behold a great red dragon, having seven heads and ten horns, and seven crowns upon his heads,” read verses 3 and 4 of Book 12. “And his tail drew the third part of the stars of heaven, and did cast them to the earth.” Blake turns that almost incomprehensible text into a viable image of menace and apocalypse. Thomas Harris took inspiration from Blake’s painting in writing the novel Red Dragon, which introduced the character of Hannibal Lecter, one of the great nightmare figures of modern fiction. In 1808, Blake tackled the job of illustrating the great Ur text of Romanticsm—John Milton’s Paradise Lost. When Blake paints The Temptation and Fall of Eve (above, from 1808), the Tree of Knowledge seems to explode like fireworks into an umbrella over the Adam and his mate. Whereas Milton mostly follows the conventional Bible story of Adam and Eve emphasizing the sinfulness of their actions (although Milton casts Lucifer as a darkly attractive anti-hero at first), Blake portrays the taking of the apple as a felix culpa or “fortunate fall,” in which the knowledge gained by that act compensates for the loss of what he sees as a false paradise void of true freedom. Blake models his hypermuscular Adam and Eve after the buff bodies of Michelangelo, one of Blake’s biggest influences. Blake takes the humanist bent of Michelangelo’s Sistine Chapel ceiling and other works and sends it into overdrive, arguing that, at least in this case, “bad” is actually “good.” Blake always took things to extremes. My favorite Blake story involves a friend finding Blake speaking to a tree. Asking Blake if he was actually talking to the tree, Blake replied that talking to the tree would be crazy. Instead, he was talking to the angel he saw perched in the tree but invisible to everyone else. Blake believed in his ability to see things others couldn’t as much as in his ability to make them see his world secondhand in words and images. 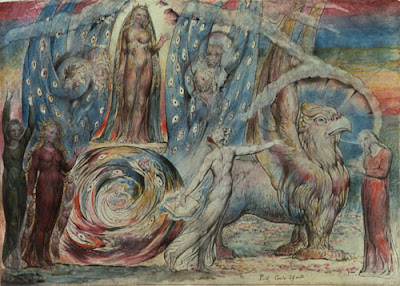 In the last years of his life, Blake took on the task of illustrating Dante’s The Divine Comedy. Although many of the illustrations were left unfinished when Blake died in 1827, Blake did manage to finish Beatrice Addressing Dante from the Car (above, from 1824-1827). Blake chooses the moment here when Dante finally speaks with his beloved ideal, Beatrice, the soul overlooking his journey through Hell on the way to Heaven. Blake interrupts this golden moment by injecting troubling hints as to the “real” nature of Beatrice as Blake saw her, in contrast to Dante’s vision. Beatrice speaks from a car featuring a wheel turned into a swirling maelstrom, as if it could swallow Dante whole. The gold crown Blake places on Beatrice’s head speaks of material wealth rather than the spiritual wealth of the laurel wreath Dante places on her head in the text. Blake sees Beatrice as embodying a false, materialist hope that actually will block Dante’s path to salvation rather than pave the way. Again, Blake plays the contrarian, turning another’s vision on its head through the power of his own. Perhaps this tendency to cause trouble, more than anything else, endears Blake to each generation that encounters him as the original maverick who never stopped believing in himself and his ideals.

Like the characterization of Blake as "original maverick"...he was certainly sui generis both as artist and writer. Nice Hart Crane (or Harold Bloom?) reference in the title, too.

For the record, I had the Bloom book in mind when I picked the title. Of all the Bloom books I've read, I think his Visionary Company is the best argued of the bunch, with The Anxiety of Influence a close second.

Blake was truly a visionary -- both as an artist and a poet -- a man far ahead of his time. Lovely post.