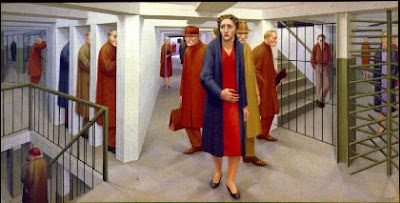 When he painted Subway (above) in 1950, George Tooker said, “I was thinking of a large modern city as a kind of limbo. The subway seemed a good place to represent a denial of the senses and a negation of life itself.” In Robert Cozzolino, Marshall N. Price, and M. Melissa Wolfe’s George Tooker, Tooker’s sense of alienation in modern life is seen from all angles—social, sexual, and religious. A shy, half-Hispanic, homosexual, devout Catholic with a Dorothy Day-esque thirst for social justice, Tooker remains an outsider in American society as much as an outsider in American art thanks to his tempera painting technique. As Cozzolino puts it in his essay, “Between Paradise and Purgatory: George Tooker’s Modern Icons,” “Tooker’s work posits that the absence of community, communication, empathy, or kindness is the source of, and path to, human suffering.” Through his works, Tooker tries to make us recognize that suffering and find a path out of it. Sociologist David Riesman’s 1950 work, The Lonely Crowd, argued that the loneliest individuals often exist surrounded by the masses in modern life. Tooker took that idea and created images that condensed the theory and the emotions surrounding it into a single, powerful vision. Like few other artists, Tooker holds a mirror to modern American life and shows us our true face. 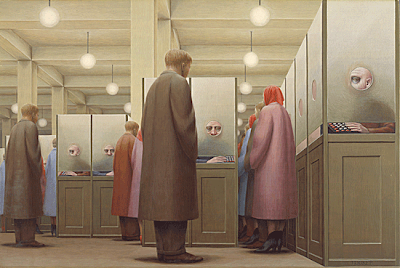 Kafkaesque is the first word that often comes to mind when seeing Tooker’s Government Bureau (above, from 1956). Forced to endure bureaucratically generated waits for permits to renovate his Brooklyn home, Tooker transformed that experience into the menacing image of eyes peeping through tiny openings at the helpless seekers of information. The relentless duplication of pillars and crossbeams generates an ideal geometry of anxiety. “Tooker… employ[s] certain abstracting devices, including a stylized geometry and an elaborate use of pattern, to underscore the Kafkaesque menace of the spaces of officialdom conjured by his protest paintings,” Anna C. Chave writes in “Framing Imagery: At the Intersection of Geometry and the Social.” By presenting the mercilessness of such geometric prisons, Tooker protests against the antiorganicism of modern life stifling the free flow of individuality. Tooker appreciated the power of community thanks to his own experience of benefitting personally and socially from interaction with other artists such as Paul Cadmus and Jared French. Cadmus and French helped Tooker cope with his just-realized sexual orientation and opened up creative outlets through introductions to other artists, such as W.H. Auden, Christopher Isherwood, and Cadmus’ brother-in-law, Lincoln Kirstein. “At a time when the young Tooker was struggling to accept his own sexual attraction to men,” writes Jonathan Weinberg in “Tooker and Company: Identity and Community in the Early Work,” “the relative openness with which Cadmus and his glamorous artist friends acknowledged and even celebrated their homosexuality must have been affirming.” Affirmed as a person and an artist, Tooker found the footing to stride forward in his unique style. 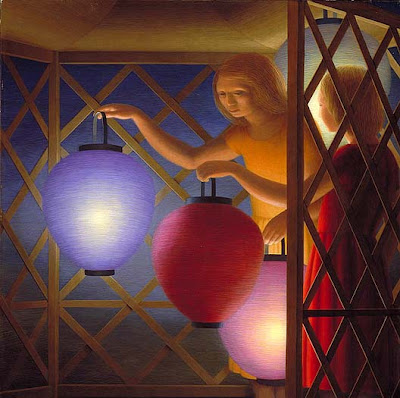 Like that other great modern American tempera painter, Andrew Wyeth, Tooker often takes memories and weaves them into his work, such as childhood memories of summer nights in the work In the Summerhouse (above, from 1958). The slowness of the tempera technique allows for the physical experience of reliving memory. “Watching George Tooker paint is excruciating,” writes Thomas H. Garver in “On the Art of George Tooker.” “Stroke, stroke, stroke, it goes on and on, yet to an observer almost nothing seems to be happening. Only the artist knows the glorious silent mantra that creates a work of art.” This communion with the personal past parallels a communion with the whole past of art history. “For Tooker,” Garver continues, “’Art comes from other art’—a phrase he credits to Thomas Aquinas—for no matter what the subject, the new paintings will be refracted by that ‘other art.’” The isolation chamber of the act of painting is simultaneously an echo chamber in which the influence of Quattrocento artists such as Masaccio, Fra Angelico, and, perhaps above all others, Piero della Francesca seems immediate despite centuries of distance. Filtering his personal life through the public art of history, Tooker moves away from overtly homosexual content in his early work towards a more universal language of isolation free of any specific alienating cause. As M. Melissa Wolfe writes in “George Tooker: A Biography,” “Other Social Realist painters of the time created works in order to compel change, but, whereas they generated protest at specific economic, class, or political conditions, Tooker’s works protest at the spiritual state that results from existing under such conditions.” It was after seeing the racial segregation and oppression of Selma in the 1960s that he “learned the meaning of the Greek word agape,” Tooker once said, taking that specific protest and making it universal and timeless. 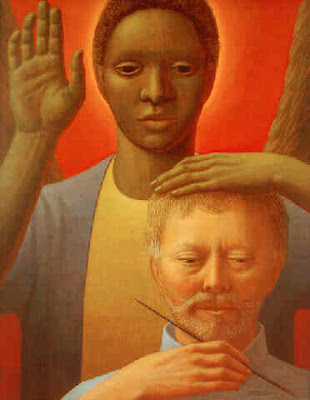 In perhaps the most beautiful essay of the collection, Robert Cozzolino examines the role of religion in Tooker’s work, specifically the Catholicism Tooker converted to in 1976 after the death of his long-time partner William Christopher. In the 1996 self-portrait, Dark Angel (above), Tooker “celebrates belief and vocation through allusions to earlier devotional art and by imagining physical contact between a messenger of good and the mortal artist,” Cozzolino writes. “As a guardian figure, the angel is an anthropomorphic manifestation of resilient faith itself, a spiritual version of the artistic muse, which grants vision and rekindles creative force.” Tooker converts to Catholicism, but he also converts Catholicism itself into a form consistent with his sense of art’s place in society as an agent for creative change. Tooker’s religious works stand out among many other works throughout his career emphasizing the positive rather than diagnosing the negative. “In some of my paintings I am saying that ‘this is what we are forced to suffer in life,’” Tooker says, “while in other paintings I say, ‘this is what we should be.’ I oscillate between the earthly state and a concept of paradise.” A Stations of the Cross Tooker painted consisting solely of hand gestures rather than the full figure of Christ shows the depth of his religious reverence fitted perfectly to his aesthetic sensibility. “What distinguishes Tooker from his contemporaries,” Cozzolino concludes, “is the way he assimilates meaningful religious references into his work without revealing a particular source or committing to programmed iconography.” Tooker refreshes religious iconography while retaining the core meaning of what it is to be a person of faith. 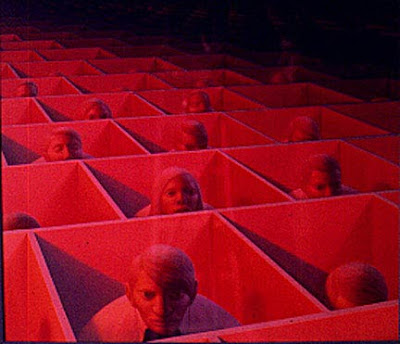 George Tooker’s paintings continue to resonate with contemporary audiences because of the essentialism of his approach. Tooker claimed that he “conceived” Landscape with Figures (above, from 1965-1966) “with the victimization of our youth by the military-industrial complex and its servant advertising” during the Vietnam War era. Yet, Landscape with Figures, with its endless sea of heads trapped within too-familiar office cubicle walls, escapes the specificity of that original conception and achieves the status of icon in the “religion” of modern American existence. Cozzolino, Price, and Wolfe have assembled a marvelous catalogue and exhibition to display the continued relevance of one of America’s truly great modern artists. In his own quiet way, Tooker speaks volumes as to what the American way of life has become and offers a gentle, persuasive statement on a way of American life that can still one day be.


[Many thanks to Merrell Publishers for providing me with a review copy of Robert Cozzolino, Marshall N. Price, and M. Melissa Wolfe’s George Tooker.]
Posted by Bob at 12:01 AM

An excellent narrative on this complicated and talented artist.

Current exhibtion at the National Academy Museum & School of Fine Arts in NYC.

Tadarise 10 mg contains the dynamic fixing Tadalafil. This medication works by forestalling the activity of the compound phosphodiesterase-5 to broaden or loosen up veins and improve the bloodstream to the penis. An expanded bloodstream prompts an erection. The medication will just aid the cycle of erection, yet physical incitement is required with the end goal for it to work. It additionally helps BPH by loosening up the muscles in the prostate and bladder region to improve the bloodstream.