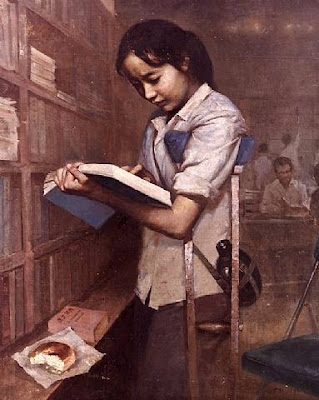 Born November 11, 1947, Ai Xuan has lived through all of the great upheavals of China over the past six decades, ranging from the Cultural Revolution to the Tiananmen Square to the recent Summer Olympics. Perhaps the defining moment for Xuan came when the Chinese government ordered him to work on a military farm in Tibet between 1969 and 1973. Seeing the people of Tibet suffer firsthand from the oppression of the Chinese government led Xuan to question the ideals of the Cultural Revolution. Xuan later painted With Ambition (above, from 1980), which shows a disabled girl on a single crutch devoting herself to her studies in the hope that she can make a better life for herself. The distance between the ambitious ideal embodied in Xuan’s painting and corrupt reality in Mao’s China slowly dawned upon the artist. Ambitious himself, Xuan continued to work hard and win national, state-sponsored awards for his realist works celebrating the best in Chinese culture, all the while still longing to align the ideal with the reality in his homeland while working the system from within. 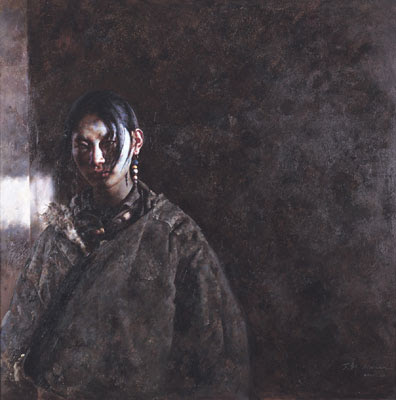 The people of Tibet, especially the children, soon became Xuan’s means of shaping a better future. Xuan claims that an epiphany struck him one day while painting the snowy landscape of Tibet that made him feel small, helpless, and alone. That momentary feeling of insignificance drove Xuan to incorporate the Buddhism and Zen of Tibet into his works, infusing the realism with a new spirituality. Xuan’s Girl in the Daylight (above, from 2002) works on both realistic and spiritual levels. His highly sympathetic, deeply identifying style of realism reminds me of the approach of Andrew Wyeth to his models. Lift Wyeth from the Chadds Ford of his youth and transplant him to Tibet, the result would be stunningly close to that of Xuan’s in terms of mood and feel. Like Wyeth, Xuan celebrates the simple existence of these people without enveloping them in pathos. Xuan makes a political statement through the plain expression of the humanity of these Tibetans more powerful than an overt “free Tibet” work could ever be. 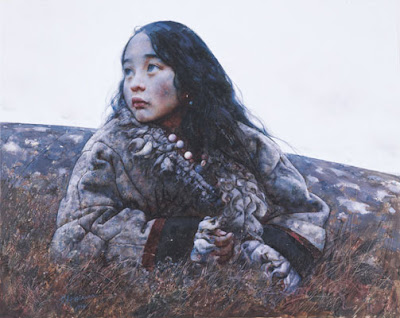 The fact that Xuan concentrates on the young, particularly small children, in most of his works lends them a sense of innocence in accord with the Zen Buddhist ethos. In Reeds in Chill (above, from 2002), the child seems to meld into the landscape as the color and contours of her coat echo the rocky, snow-capped hillside behind her. The reeds beneath her almost reach up to embrace her against the chill winds. Anyone who has taken the time to read even the briefest description of Buddhism knows that such peace and harmony lay at the heart of that belief system. The little girl’s eyes look up not in the convulsive ecstasy of so many Baroque saints of the West but rather in a gentle acknowledgement of a larger reality beyond herself. This gentleness in Xuan’s works has aided him in continuing to work within a Chinese system that continues to deny the independence of Tibet and its people. Like a tiny stream slowly eroding away hardened rock, Xuan’s Tibetan realism may one day change the course of Chinese and Tibetan history for the better.
Posted by Bob at 12:01 AM