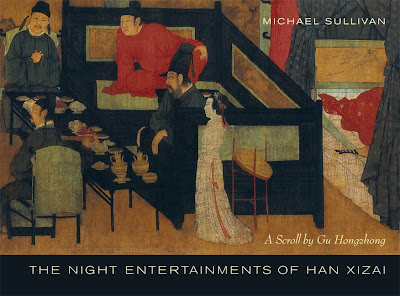 During the Five Dynasties and Ten Kingdoms period of China’s history, as Emperor Li Yu reigned over the Southern Tang Dynasty, the emperor grew concerned about the hard-partying lifestyle of one of his advisors, Han Xizai, who hosted wild parties featuring wine, women, and song that stretched long into the night. “It was said that the emperor sent a painter to record these goings-on,” writes Michael Sullivan in The Night Entertainments of Han Xizai: A Scroll by Gu Hongzhong, “hoping to shame Han Xizai into reforming his ways.” Whether the emperor succeeded in his intervention by art is unrecorded, but the painted scroll of Han Xizai’s nightly entertainment eventually became a cult classic in Chinese art history, surviving centuries of political upheaval as old dynasties fell and new ones rose. Sullivan, author of the valuable survey The Arts of China, takes us on an in-depth tour of Gu Hongzhong’s scroll painting and lingers over the images just as the emperor and, perhaps, Han Xizai himself may have done centuries ago. For anyone who has ever longed to lift one of these fragile scrolls and read it as it was intended to be read, Sullivan’s extended exploration is the closest you’ll ever come.

The Night Entertainments is “not a fit painting for a gentleman’s collection,” a fourteenth century critic sneered. “It should be considered as a warning against licentious music.” As much as critics railed against the scroll over the centuries, the very licentious nature of the art ensured its survival. Sullivan believes that it may have actually been more daring originally. The scroll “opens so abruptly, so suggestively, that one cannot help wondering if this is indeed the original opening of the scroll,” Sullivan muses. In that opening scene (above), we see the party already in full swing. A glimpse into the sleeping chamber, where rumpled bedclothes suggest non-musical entertainment, leaves little to the imagination. Han Xizai appears on the right-hand side, in a golden robe and black hat, presiding over the amusements. Han’s grey beard attests to his age. After a long career in several government jobs, Han grew tired of politics and retired. “Han Xizai kept open house for bright young men,” Sullivan writes, “and, a talented musician himself, he attracted around him musicians, singers, and dancing girls.” As if to stave off age itself, Han surrounded himself with youth, hoping that their exuberance would somehow rub off on him.

In the next section, Han casually sits on a throne-like chair. His loose white robe hangs open in the front, suggesting he has just enjoyed the company of one or more of the young women flitting about. One of the important historical aspects of the scroll is its depiction of furniture and other items, such as the musical instruments being played. The furniture is considered “typical of the Song period,” Sullivan explains, “although that may be because there is so little evidence—apart from this scroll—of what Southern Tang domestic furniture actually looked like.” The Night Entertainments presents such a rare glimpse into this time that all assumptions are based on faith to some degree. However, Sullivan defends his reading of the scroll’s story. “The reader may well feel that I am reading far more into these scenes than the evidence warrants,” Sullivan writes. “But the scenes are so compellingly real, the gestures and glances of the participants so full of feeling and meaning, that it is difficult not to give one’s imagination free rein.” Sullivan’s reconstruction of the Han Xizai party scene will free you to make the necessary leap of faith to indulge in these flights of fancy that allow us to appreciate the remarkable humanity and naturalism depicted by the artist. It’s easy to imagine pulling up a chair, raising a glass, and enjoying the music with these long-dead figures.

The final scene shows Han Xizai waiving goodbye to his guests as he retires for the night. Han slips away after reading the cues that his male guests and the female musicians and dancers were ready to move on to the next stage of the revels. At the end of the scroll appear a series of signature stamps identifying previous owners and a long inscription allegedly added by the 18th-century Emperor Qianlong. Because the earliest stamp belongs to Emperor Gaozong of the 12th-century Song Dynasty, Sullivan and other experts believe that the scroll is a copy rather than the original work. As the Song armies approached Emperor Li Yu’s territory and eventually conquered the Tang in 975, Li Yu had most records and paintings destroyed rather than fall into enemy hands. The Night Entertainments may have survived purely as a legend later reconstructed by an artist perhaps familiar with the actual original work. The copy passed down through the hands of the emperors in the Imperial Palace of the Forbidden City until “The Last Emperor,” Pu Yi, smuggled it out in 1921 and gave it to his brother to sell. Sullivan doesn’t see the lack of an original as a black mark against the scroll. “[W]hile the style of The Night Entertainments may have been transformed,” Sullivan asserts, “the message of the painting is as clear and as disturbing to us today as it must have been to Han Xizai when, more than a thousand years ago, the original scroll was first placed in his hands.” 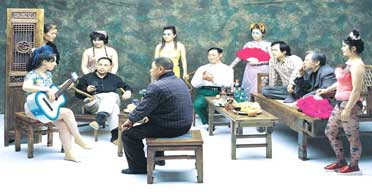 Over the centuries, The Night Entertainments became a touchstone for Chinese artists. Newer, less sexually explicit versions arose in the Ming and Qing dynasties. In 2000, Wang Qingsong created a photomontage parody titled The Night Revels of Lao Li (detail above; a full comparison with the original is here). The Night Entertainments continues to find a place in the modern, rapidly changing culture of 21st-century China, two millennia after its conception. Sullivan’s study of this landmark in Chinese art vibrantly brings together history, art, and culture in a fascinating, cross-disciplinary fashion. The landscape format of the book itself helps recreate some of the feel of a scroll as you linger over the beautifully colorful reproductions. I did find myself wishing for more contact, perhaps in the form of a companion CD-ROM with which I could virtually scroll through the work as originally intended, but that’s more of a credit to Sullivan’s ability to generate enthusiasm in the reader than an actual complaint. In The Night Entertainments of Han Xizai: A Scroll by Gu Hongzhong, Michael Sullivan plucks a precious piece of Chinese art history out of time and places it in your hands for your edification and, yes, entertainment.


[Many thanks to the University of California Press for providing me with a review copy of Michael Sullivan’s The Night Entertainments of Han Xizai: A Scroll by Gu Hongzhong and for the images above.]
Posted by Bob at 12:01 AM