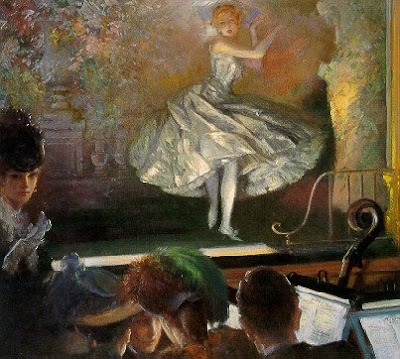 When Everett Shinn traveled to France in the summer of 1900, he most likely saw Edgar Degas’ paintings of dancers from the 1870s and 1880s. Born November 6, 1876, Shinn the American took Degas’ French treatment of the theater and dance and translated it to the American idiom of the Ashcan School in works such as Dancer in White Before the Footlights (above, from 1910). A playwright and actor himself, Shinn felt himself drawn to the theater and made it his specialty (as Degas had done before) in the Ashcan School’s larger program of depicting the growing American urban populating both at work and at play. Because of the clear appeal of such works, Shinn enjoyed commercial success long before fellow Ashcan School artists such as Robert Henri, John Sloan, William Glackens, and George Bellows. While his fellow Ashcan artists earned their reputation in depicting the darker, harsher side of urban life, the handsome and urbane Shinn cultivated a position in high society through these Degas-esque paintings. 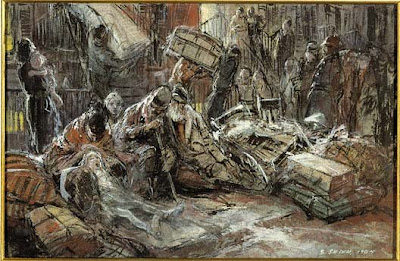 Of course, Shinn still remained true to some degree to his roots as an illustrator. Working alongside Glackens and Sloan as newspaper illustrators, Shinn’s quick drafting skills and eye for arresting compositions soon made him a successful artist of everyday life in New York City. After witnessing the eviction of an old musician from his apartment on the Lower East Side, Shinn painted Eviction (Lower East Side) (above, from 1904). Pumping up the pathos, Shinn replaced the single old man with a whole family cast onto the streets. The family slumps onto a mattress in despair as passersby watch workers dump the family’s belongings beside them on the pavement. Jacob Riis’ photography, collected most notably in his 1890 work How the Other Half Lives, drew public attention to the deplorable living conditions many immigrants endured in their pursuit of the American dream. Despite such awareness and the first social policy changes aimed at alleviating the problem, squalor and crime continued to plague the poor in New York City decades later and demand the talents of Shinn and others to bring it to the public’s eye. 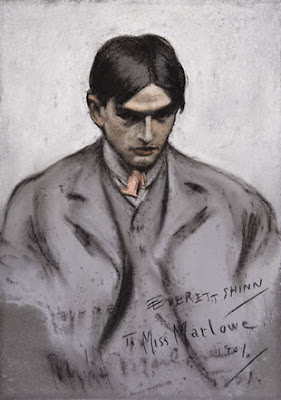 Today, scholars recall Shinn mainly as another member of the Ashcan school. Henri, Sloan, Glackens, and Bellows usually eclipse Shinn and his work. Shinn’s talent is undeniable, as seen in quick pastels such as his Self-Portrait (above, from 1901), but the balance of light and dark in his work skews too heavily towards the Degas-esque and not enough in the gritty direction we associate with his better known contemporaries. Shinn played to the taste of his time at the eventual expense of later obscurity when the public desired fewer pretty pictures and more depictions of harsh reality. Sadly, Shinn suffered through a series of broken marriages and financial ruin during the Great Depression before enjoying a brief renaissance of interest in his work in the 1930s until his death in 1953. Like his Ashcan cohorts, Shinn raised the field of illustration in America to the level of high art and helped usher in the age of American urban life as a subject worthy of the artistic spotlight.
Posted by Bob at 12:01 AM

I really like some of these Degas drawings, especially the ballerinas. As far as painting and drawing goes, I would say Degas is an excellent artist to learn from.