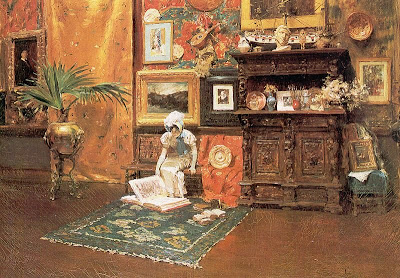 In the late nineteenth century in America, William Merritt Chase’s name was synonymous with the word artist. Born November 1, 1849, Chase garnered most of the awards, presided over most of the societies, and generally introduced his presence anywhere art was discussed. In retrospect, someone such as the withdrawn Winslow Homer may seem the greater artist today, but at the time, but Chase put himself forward as what an artist should look like and how an artist should relate with the public. As seen in Chase’s painting In the Studio (above, from 1882), Chase even decked out his home and studio in the mode of a fashionable society painter. Sumptuous carpeting and lavish décor seem out of place in the paint-spattered world of what we think of as a working studio, but Chase sought to create a mood in his sitters and patrons congruous with their own upper crust expectations. For an America still striving to forge a cultural heritage on the verge of the twentieth century, Chase stepped forward and assumed leadership of what direction that culture would take. 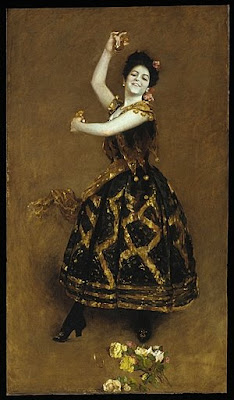 Stylistically, Chase greatly resembles John Singer Sargent in the lightness of his touch and flair for the theatrical in works such as Carmencita (above, from 1890). The label of Impressionism sticks better to Chase than it does to Sargent, however. Thanks to his friendship with John Henry Twachtman and other American Impressionists, Chase easily slips into the category of Impressionist, which was only then gaining in popularity in America. When Chase returned from his studies in Europe in 1878, Impressionism was “the new thing” and Chase a bold experimentalist. Success and recognition, however, froze Chase stylistically. As other artists moved past Impressionism into the movements that would mark the beginning of the twentieth century, Chase failed to keep up in his own art, more content to repeat the works of the past and rest on his hard-earned laurels. It’s easy to dismiss Chase as a fuddy duddy of sorts, but his importance in the development of an arts culture in America can not and should not be denied. 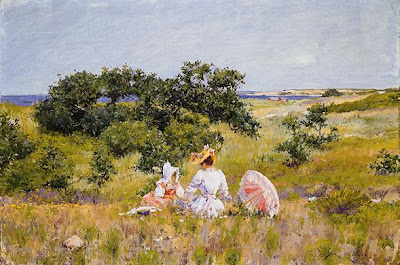 Despite his own artistic entrenchment, Chase taught young artists such as Georgia O'Keeffe, Charles Demuth, and Marsden Hartley who took his lessons and struck out on their own path with his blessing. While Chase taught his students the old ways of painting and thinking, rival teacher Robert Henri taught his charges the new ideas of a physical approach to art totally immersed in the life of the everyman that evolved into the Ashcan School. Things actually got physical as Henri’s students sometimes rumbled with Chase’s pupils over art. (I tend to imagine this as an artsy version of the Jets versus the Sharks.) Chase, however, never entered the fray, always floating above it all. In the 1890s, Chase summered at Shinnecock off of Long Island, rejoicing in the seaside beauty and painting his family in the open air in works such as The Fairy Tale (above, from 1892). In many ways, Chase lived a fairy tale existence, carefully constructing a persona as an artist and inviting young artists to indulge in that fantasy world momentarily while discovering their own creative reality.