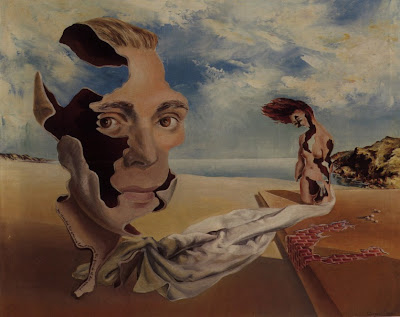 When James Gleeson, Australia’s leading Surrealist painter died just last month at 92 years of age, on October 20th, he left behind a long legacy of artistic achievement as well as art scholarship. Born November 21, 1915, Gleeson traveled through Europe from 1947 through 1949 drinking in the lessons of not only the Old Masters but also newer artists such as Salvador Dalí, Giorgio de Chirico and Max Ernst. Gleeson’s We Inhabit the Corrosive Littoral of Habit (above, from 1940) shows the influence of Dali by copying the Spanish Surrealist’s technique of ripping away parts of the figure to reveal a hollowness inside, like chocolate Easter bunnies. Gleeson believes that habit, namely the rational autopilot we all use on a daily basis, corrodes our imagination the way that the ocean erodes the littoral or shoreline. Coming from Australia, an island nation surrounded by corroding seas, Gleeson sought to break out from those confining boundaries both physically and imaginatively through the use of Surrealism. Coming in the second wave of Surrealism, however, Gleeson benefitted from the psychedelic sixties in a way that his older models could not. 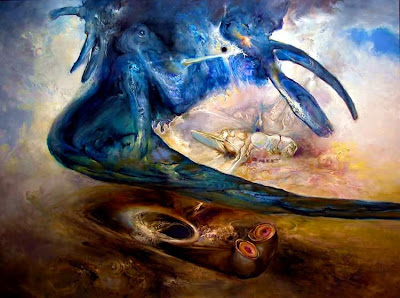 Many of Gleeson’s titles sound like they would make great titles for a Pink Floyd song or album. I can hear David Gilmour’s guitar work on Sky Technotronics (above) right now. The colors that Gleeson used and the way he modeled them are truly “tripping.” Beneath that trippy exterior, however, Gleeson studied hard the ideas of Carl Jung, specifically the collective unconscious. Whereas earlier Surrealists tended to lean heavier towards Sigmund Freud’s more sex-driven psychology, Gleeson taps Jung’s collective unconscious in a freer, more interesting way. However, Gleeson does bring up sexuality in his art. You can see here a collection of more of Gleeson’s work, including startlingly frank male nudes through which Gleeson asserted his homosexuality in a fine arts setting. Gleeson truly allowed his fantasy life free rein in all his works. By using the surrealist technique of decalcomania, in which paint is pressed on to the surface of the canvas using a piece of paper and allowed to go where it wishes, Gleeson allowed his materials to let go and, therefore, freed himself to let go and follow the “accidents” wherever they led. 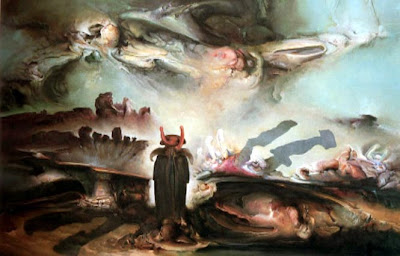 Of course, Gleeson’s art can’t be considered a complete “accident.” Too much thought and imagination goes into a work such as Keeper of Used Shadows (above, from 1986). Again, the title alone draws you into the work. At first glance, Gleeson’s Keeper of Used Shadows resembles the fantasy art of someone like Frank Frazetta, but Gleeson’s deep knowledge of art history elevates it beyond pure science fiction and fantasy. Gleeson actually painted a series of works he called “psychoscapes” in which he attempted to paint liquid, solid, and air coming together to symbolize the unconscious and conscious parts of the human mind uniting. You can say that Gleeson asked for the impossible, but he made it possible, at least in his art. Gleeson’s appreciation for art history instilled in him the desire to create new ways of seeing appropriate to modern human existence, just as the old ways served the olden days. As they used to say in the Sixties, “Feed your head.” James Gleeson’s art gives us more than enough to chew on.
Posted by Bob at 12:01 AM