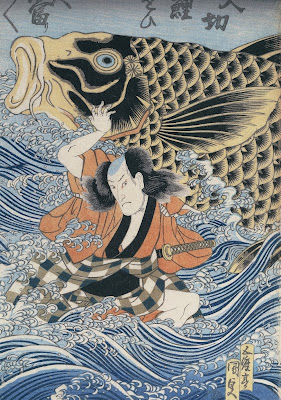 Some people believe that the best way to learn a foreign language is language immersion, the method by which a person tries to operate entirely in a second language. Such immersion stretches the mind to actually think in that second language and make the leap from simply translating everything mentally from their mother tongue. When European artists of the nineteenth century began to encounter the world of Japanese prints, they immersed themselves in that second visual language and stretched themselves artistically to incorporate that wholly alien look into their work. It’s difficult for us today to imagine that initial impact of Japanese art on Western art, but two new books edited by Nobuyoshi Hamada, Wave, Cloud, Pine: Traditional Patterns in Japanese Design and Flower, Bird: Traditional Patterns in Japanese Design (published by PIE Books and distributed in the United States by Rizzoli Books), help recapture the diversity and seemingly endless inventiveness of those Japanese artists that found a place in the souls of artists such as Vincent Van Gogh, Paul Gauguin, and countless others. Oddly wonderful works such as Utagawa Kunisada’s Catching a Giant Carp—What Luck! (above, early 19th century) opened up a whole new range of possibility for Western art as Japanese society itself opened itself up to the West. 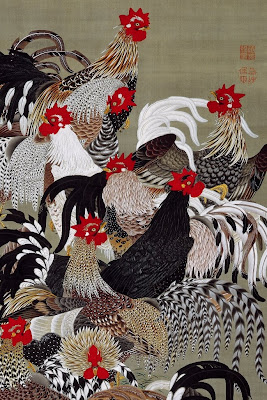 Unfortunately for those who do not read Japanese, these two volumes contain very little English text. But in one of the few extended passages in English, Hamada explains the appeal of the Japanese approach to nature in art. “The wisdom of past generations lay in capturing this beauty in paintings and craft objects, so to be incorporated into everyday life, enjoyed, and cherished,” Hamada writes. “Unlike Western art, which treats nature as menacing and adversarial, the art of the East pursues harmony with nature and focuses on humanity’s perceptions of the natural world.” When Ito Jakuchu paints The Colorful Realm of Living Beings: Hydrangeas and Fowls (above, 1759), he elevates flora and fauna to the level of humanity, integrating Buddhist and Zen abstract concepts with concrete nature. For someone with the sensibility and sensitivity of Van Gogh, such works represented the world inside his head and heart that his hands still struggled to realize visually. Perhaps better than any missionary, these traditional Japanese designs conveyed the truths of Buddhism and Zen to Western audiences looking for an alternative to the Christian tradition tainted by centuries of politics and warfare. 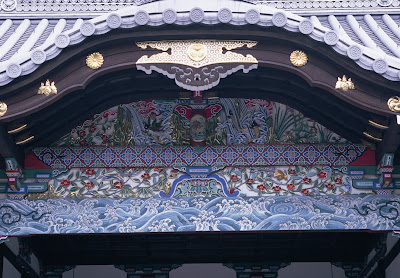 Hamada breaks up the two volumes into the five categories of wave, cloud, pine, flower, and bird and entrances you with repetition. Between stunning color reproductions, Hamada intersperses preparatory drawings in fine detail that place the technique of the artists under a microscope. Right after seeing how an artist represents a wave’s motion in color in the context of a painting, we see the pure line itself in black and white. Hamada isolates the gesture and focuses on the human element in representation, specifically how the artist sought to reproduce the spirit of the wave and not the photographic reality. Katsushika Hokusai’s The Great Wave off Kanagawa, which Hamada includes in his examination, looks like no wave ever seen by human eyes, yet the biting fierceness of a wall of water strikes us through Hokusai’s gestures better than via any snapshot. Once you get the visual language down, Hamada guides you through the multiplicity of uses Japanese artists put it to. Japanese prints may lead the wave of Japonisme in the Western mind, but Hamada proves that the gestures of those prints ripple throughout Japanese culture to furnishings, kimonos, pottery, postcards, and even photography. Even the patterns of rock gardens contain the elements of traditional wave patterns. Examples such as the wave pattern found in the Undulating Bargeboard of the Gokonomiya Shrine (above) demonstrate how these motifs reach every corner of Japanese life. Such integration just can’t be found in Western civilization, which may explain not only our historical disintegration and our fascination with the East. 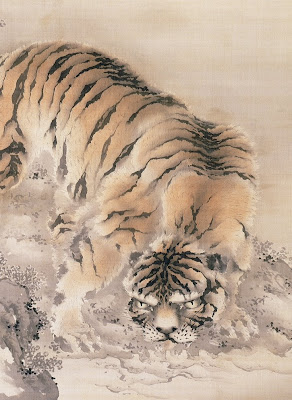 As I paged through these works, I found myself reverse engineering so many works of Western artists into the Eastern images before me, consciously going against the grain of influence. When I saw Gan Ku’s Tiger (above, late 18th century), my mind immediately flashed to Franz Marc’s Tiger. Marc doesn’t copy Gan Ku’s animal and may never have even seen anything by the Japanese artist, but the same spirit of the animal itself shines through both works. The preparatory drawings with their distinctive lines reminded me of the drawings of Van Gogh, whose draftsmanship seemed so “wrong” to contemporaries yet seems so right to us today. There’s certainly a danger in trying to link these traditional Japanese patterns to their implementation in Western art, but there’s also a benefit in seeing just how deeply those motifs have taken root in Western visual culture since the late 19th century. Influence is often such an elusive trail to follow that such clear and documented lines of descent as the effect of Japanese art on Van Gogh’s generation is an irresistible path of research. 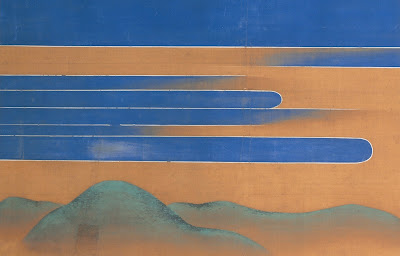 The lack of English text actually benefits a non-Japanese reader in some ways. The lack of verbal explanation frees the reader to surrender himself to the images themselves. Allowing the sequences of images to pass and engrave themselves on your imagination through repetition, you will find yourself inspired by these motifs and the artists that practiced them. Startling variations, such as the stylized, almost modernly abstract clouds of Tosa Misufumi’s Amanohashi (above, from 1855), will open your eyes to the amazing inventiveness of these artists working within an ancient tradition. Nobuyoshi Hamada’s two volumes of Traditional Patterns in Japanese Design are an ideal gift for any young artist learning how to see the world and shape an individual vision from a universe of possibilities.

what an amazing article (and great artwork)... and it really makes sense - 'immersion stretches the mind'.