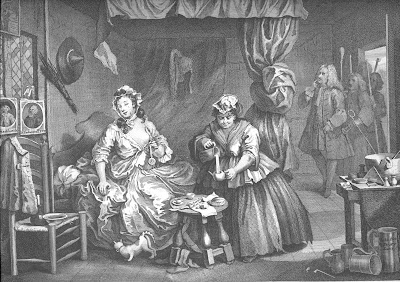 Rodolphe Töpffer often gets credit for being the first comic artist, but I think an equally strong case can be made for William Hogarth. Born November 10, 1697, Hogarth made illustrations for books and poems that showed sequentially the dynamics of seventeenth century English life. In A Harlot's Progress, Hogarth traced the slow descent of an innocent girl into the world’s oldest profession and, finally, total dissolution. The third image in the sequence (above, from 1732) shows the “harlot” Moll moving on from the semi-respectable position of “kept woman” to the level of common prostitute. Hogarth witnessed how English society allowed young women to fall into such situations by limiting their prospects essentially to marriage, destitute spinsterhood, or the exchange of sex for money. A few years after A Harlot’s Progress, Hogarth designed the series titled A Rake's Progress in which he showed how young men took advantage of their position in the English patriarchy and wasted their lives in vice. With a clear eye and savage remorselessness, Hogarth struck directly at the heart of English society and showed it the face it wanted to ignore in the mirror. 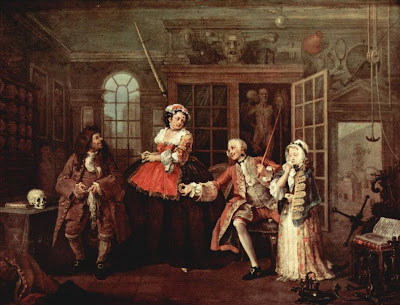 Despite such moralizing in his work, Hogarth remains hilariously funny. Hogarth’s six paintings derived from the satiric comedy play Marriage à-la-mode show how marriage wasn’t that much better an option than prostitution in some ways. In the third panel of the series (above, from 1743-1745), Hogarth shows the Viscount, the “catch” of the story, visiting the doctor to demand a refund for the mercury pills prescribed for his syphilis. A young prostitute beside the Viscount touches an open sore on her mouth that represents the onset of syphilis. For Hogarth, the venereal disease of syphilis stands in for the larger spiritual diseases of the twisted sexual politics of English society at the time. The double standard in which men could frequent prostitutes yet woman had to remain pure or else become “damaged goods” results in a tangled mess of morals rather than a sound foundation of civilization. Such imagery seems strikingly modern for Americans in light of the culture wars in which, among other issues, fundamentalist religion calls for sexual abstinence instead of sexual education despite hard statistical evidence proving how America’s youth suffers from enforced ignorance. 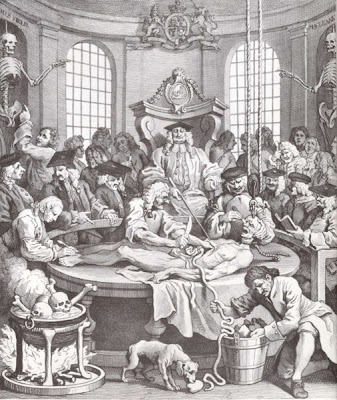 In The Abu Ghraib Effect (reviewed here), Steven F. Eisenman praised Hogarth for not playing along with the violence embedded in Western civilization and its art. Eisenman specifically cited Hogarth’s 1751 series The Four Stages of Cruelty. In four panels, Hogarth traces the life of a young boy who begins by torturing animals and later graduates to killing people before dying himself at the end of a hangman’s noose. In the fourth and final panel, The Reward of Cruelty (above, from 1751), Hogarth shows the subject’s final fate, in which anatomists dissect the murderer’s body as sanctioned by law. Hogarth, who loved animals and actually kept a pet cemetery for his birds and dogs behind his home, knew that childhood cruelty to animals often led to violent, sadistic behavior as an adult, a phenomenon that psychologists today also recognize. In Hogarth’s day, cruelty to animals and, in the case of murderers, people didn’t seem at all unnatural. Not until the Anatomy Act of 1832 did the practice of dissecting murderers end in England. (The Cruelty to Animals Act of 1835 addressed animal abuse just a few years later.) Literally ahead of his time, Hogarth saw the cruelties and foibles of his society and drew them in the hopes that others would draw the same conclusions that he did.
Posted by Bob at 12:02 AM

I've always been a big fan of Hogarth's social commentary. Great to see the many posts you have on him.