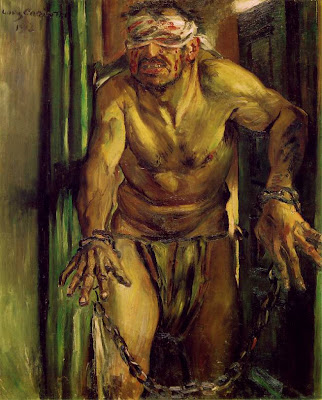 Lovis Corinth, German Impressionist and later Expressionist (although he would have denied either label), was born on July 21, 1858. Corinth’s apparent turn in style coincided with the stroke he suffered in 1911 that rendered his left side partially paralyzed. The Impressionist style he displayed with his natural left handedness soon became tortured Expressionism as he relearned how to draw and paint with his right hand. Corinth painted Samson Blinded (above) in 1912, just a year after his paralysis. The portrait of the debilitated Biblical strongman may be a portrait of Corinth’s own emotional state as he came to grips with the reality that the remarkable draftsmanship of his youth was gone. 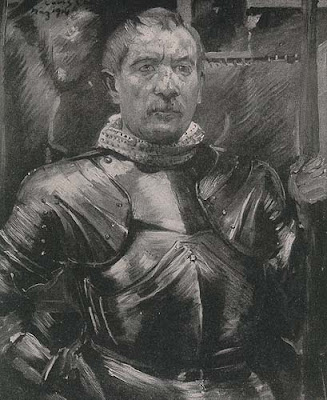 Like Kathe Kollwitz, his contemporary in Germany, Corinth experimented with printmaking and could render powerful images in black and white as well as color. His Self Portrait With Armor (above) shows the artist wearing a suit of armor he kept in his studio as a prop. Corinth wore his passionate German nationalistic feelings like a suit of armor as well. He joined the Berlin Secession in 1901 and became its president in 1915, serving until his death in 1925. Upon becoming president, many of the members left the Secession, disagreeing with Corinth’s nationalism and the direction he wished to take the organization. Even in the midst of the horrors of World War I, Corinth continued to stand beside his homeland. 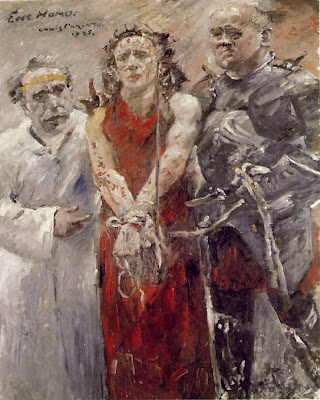 After the stroke in 1925, Corinth discovered an entire new way of using color to express emotion. The pathos of his Ecce Homo (above), painted in 1925, shortly before Corinth’s death, strikes even more penetratingly with the blood red garment of Jesus. The figure on the right wearing the same armor in Corinth’s self portrait above bears a world-weary look on his face, in contrast to the defiance in Corinth’s eyes of the self portrait. Perhaps Ecce Homo hints at some remorse in Corinth at the end, a reevaluation of his nationalism in light of the human cost exacted in its name. Corinth didn’t live to see the rise of Nazi Germany, but his works survived. Despite his faith in the German state and military might, Corinth’s post-stroke works were deemed “degenerate art,” while his pre-stroke works continued to be praised as “truly” German—an odd splitting of this deeply fractured artist.