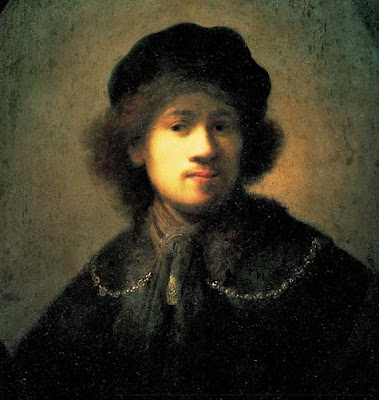 Anyone who has been watching Simon Schama’s series The Power of Art on PBS here in the United States has been witness to some really amazing television. But perhaps the most powerful episode of that series was that featuring Rembrandt van Rijn, born on July 15, 1604. I’m not surprised at the quality of Schama’s coverage of Rembrandt considering how amazing his book Rembrandt’s Eyes was. As Schama points out in his program, Rembrandt remains a compelling figure because of the psychological depth of his works, especially his self-portraits—approximately 200 of which he did over his 65 years of life. The portrait above, from 1629, shows the 24-year-old hotshot just as he began to make a name for himself, taking lucrative commissions, opening up his own academy, and accepting students into his studio. 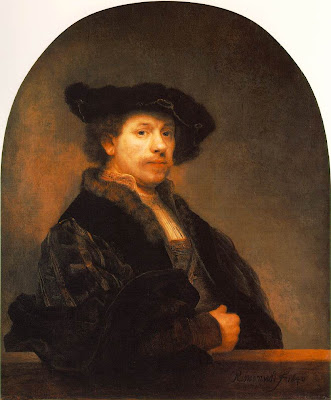 Schama offers the self portrait from 1640 (above) as evidence of Rembrandt’s salad days. He strikes a pose from a portrait by Titian, elevating himself to the status of art titan. Rembrandt covers himself in the finery of the wealthy, showing off the wealth that allowed him and his wife Saskia to start a family and move into a palatial home. Sadly, from this peak, Rembrandt soon begins his fall. In 1641, his only child to survive to adulthood, Titus, is born. Unfortunately, the toll on Saskia’s health is too great and she perishes in 1642. Rembrandt then begins his spiral into financial difficulty, difficult relationships with women, and a loss of popular and critical standing in the art world as he explores a new style of interior self-examination and leaves behind the stuff of surfaces and simple pieties that made his fortune and name. 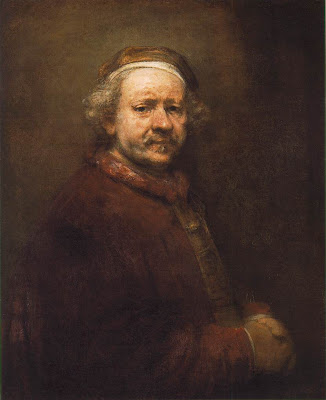 This portrait from 1669, Rembrandt’s last year, shows him in all his weariness. The ravages of time appear in the topography of his face. His eyes shine with a somber introspection, as if looking into the future towards the acceptance his own time could never grant. When modern artists such as Picasso arrived at the point at which they needed to explore their own identity through the self-portrait, it was Rembrandt who provided the most powerfully honest example. 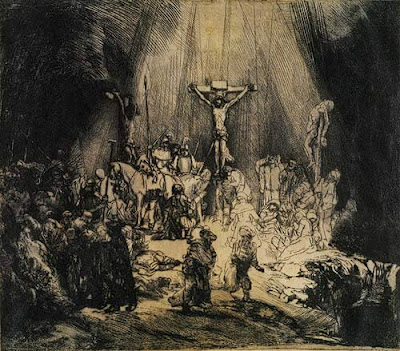 In addition to the sad self-portraits of his later years, Rembrandt increasingly examined the scenes of Christianity, bringing the same rugged, homely honesty of his self portrayals to his depictions of Christ. In contrast to the composed, almost serene visions of the crucifixion found in Renaissance art and elsewhere, Rembrandt’s scene at Golgotha swarms with the chaos of an execution, which it was. By including the two thieves in the scene and the title, Rembrandt invites all sinners to participate in the moment, bringing each viewer into the picture and removing all distance forged by time and degree. Just as Rembrandt’s self-portraits celebrate the human, in all its glory and weakness, his religious images celebrate the divine in all its glory and, paradoxically, its humanity.