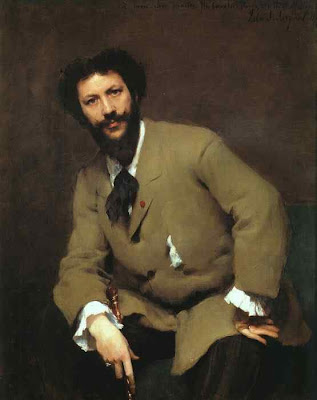 “Paint like Velazquez! Paint like Velazquez!” extolled Carolus-Duran, the great French portraitist and teacher of John Singer Sargent. Born on July 4, 1837 as Charles Auguste Emile Durand, Carolus-Duran had a lasting influence on Sargent, who attended his atelier from 1874 through 1878 and painted the Velazquez-esque portrait above of his teacher in 1879. Sargent was obviously listening. 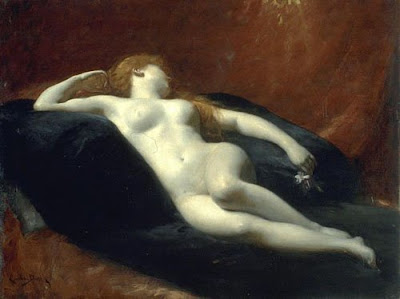 Carolus-Duran earned a rakish reputation during his days in Paris, growing nearly as famous for his good looks as for his painting skills and talent as a teacher. He demonstrated an early willingness to accept foreign students in the tough world of the Paris art schools, to the benefit of Americans such as Sargent and Theodore Robinson, who studied briefly under Carolus-Duran before embracing Impressionism and meeting Claude Monet. Working directly on the canvas, with no preparatory drawings or underpainting, Carolus-Duran promoted a bold, fresh style of painting in tune with the philosophy of the Impressionists if not with their subject matter or style. In works such as his Danae (above), you can see the brilliant attention to detail and careful brushstrokes, as well as the sexual freedom in the air of late 19th century Paris. 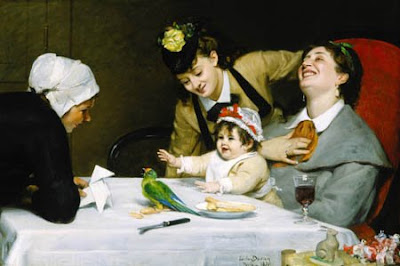 But Carolus-Duran’s claim to fame during his lifetime was the society portrait. As seen in The Merrymakers (above), Carolus-Duran could paint textures and surfaces with such a fidelity that Sargent must have learned some of his tricks from the master. Carolus-Duran recognized Sargent’s talent early, inviting him and only two other students on a special painting trip in 1875 to Nice, France. The shadow under the knife at the edge of the table is one of those little details that go unnoticed but are as much a signature of mastery as the name written in the corner. Carolus-Duran’s paintings are little known today, but his contribution to the education of Sargent alone earns him a place in the halls of art history.
Posted by Bob at 6:18 AM

Something in his paintings makes me think that all the men and women were actually dead. Don't ask me why. Might be the color, might be the style..