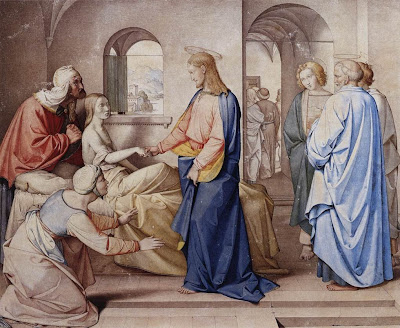 Johann Friedrich Overbeck, German Romantic painter and perhaps the finest of the Nazarene Movement, was born on this date in 1789. Overbeck and the Nazarenes hoped to resurrect a sense of spirituality and honesty in religious art, which they felt had become sensationalized as part of the Neoclassicist strain of Romantic art. His simple and spare Christ Resurrects the Daughter of Jairu appears above.

The Nazarenes saw the influence of Jacques-Louis David and the other Neoclassicist painters of the Romantic era as tainting religious art. To escape the worldliness of that type of art, Overbeck and other painters formed the Brotherhood of St. Luke in Vienna in 1809. In 1810, Overbeck and the three remaining members of the Brotherhood moved to Rome to live in an abandoned monastery, where they lived a near-monastic existence in hopes of recreating the conditions of the workshops of the Middle Ages, whose honest, spiritual religious art they tried to emulate. The name Nazarenes actually refers to their practice of wearing “biblical-style” clothing and hairstyles and was originally a derisive name. 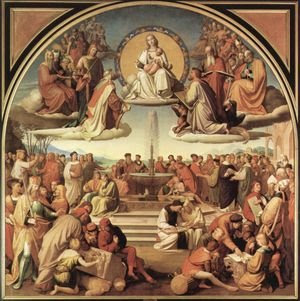 Overbeck and the Nazarenes lived their artistic and spiritual philosophy to the utmost. In The Triumph of Religion in Art (above), Overbeck literally enthrones religion over art, believing that the only true purpose of art was to work to the greater glory of God. Even among the devout Nazarenes, Overbeck was noted for his piety. Although Overbeck’s style tends towards a dryness and somberness that makes it less than popular today, his philosophy of honesty and simplicity and a return to Medieval practices in art presages the goals of the Pre-Raphaelite Brotherhood in England in Victorian times and stands as one of the earliest truly avant garde art movements. Overbeck still stands today as perhaps the last of the true believers.
Posted by Bob at 5:47 AM