“I became interested in painting with light, not on the surface of canvas, but directly in space,” Laszlo Moholy-Nagy once said of his photogram experiments, in which he exposed light-sensitive photographic paper upon which different objects had been placed (an example from the 1930s appears above). Moholy-Nagy, born on this date in 1895, epitomized the versatility of the Bauhaus, where he taught and practiced painting, photography, sculpture, and typography, indulging his imagination in whatever medium came to hand. 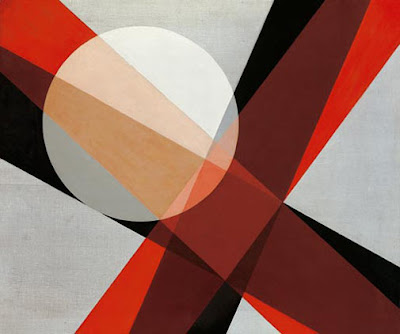 As a painter, Moholy-Nagy followed the tenets of the Constructivists, especially Kazimir Malevich. In works such as A 19 (above), Moholy-Nagy developed a cool, precise brand of abstraction that marked a sea change at the Bauhaus, where he had replaced the more mystical Johannes Itten, the previous teacher of the preliminary course all students had to take. After the excesses of Expressionism and the violence of World War I, which Moholy-Nagy witnessed firsthand, the Constructivist style offered order, stability, and, possibly, peace. Unfortunately, as Fascism took hold on Germany and World War II loomed, the Jewish Moholy-Nagy and other professors at the Bauhaus fled to the sanctuary of America. (In 2006, the Tate Modern presented the exhibit Albers & Moholy-Nagy: From the Bauhaus to the New World, tracing the journey of Moholy-Nagy and Joseph Albers to freedom.) 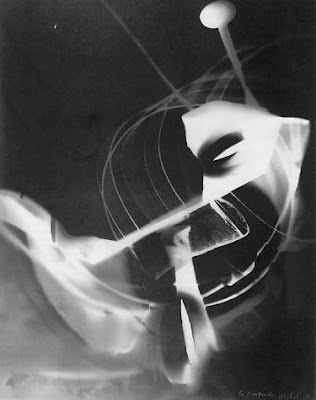 I’ve often confused Moholy-Nagy’s photograms with Man Ray’s rayograms, which used the same procedure. However, looking more closely, you can see that Ray’s images focus mainly on the objects on the paper and how they are arranged, stemming mostly from his Surrealist roots and his desire to make the everyday seem unfamiliar. Moholy-Nagy uses the objects as a secondary device, concerning himself more with how those objects shape and distort the light as it strikes the paper. By literally painting with light itself, Moholy-Nagy reduced image making to its very essentials and broke new ground for photography as an art form in itself.