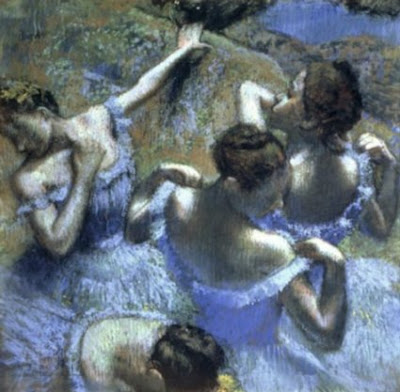 Thinking about all the exhibits I’ve seen over the years at the PMA, two stand out in my mind as my absolute favorites—Thomas Eakins in 2001 and Degas and the Dance in 2003. Edgar Degas, born on this date in 1834, obsessed over his depictions of dancers and the theater. Some niche exhibits seem thin (the PMA’s Manet and the Sea in 2004 comes to mind as one example), but Degas magnificent obsession with dancers and the dance itself overflowed with beautiful images and truly gave a glimpse into the obsessive nature of a true master at work. One of Degas’ most beautiful dancing images, Blue Dancers, appears above. 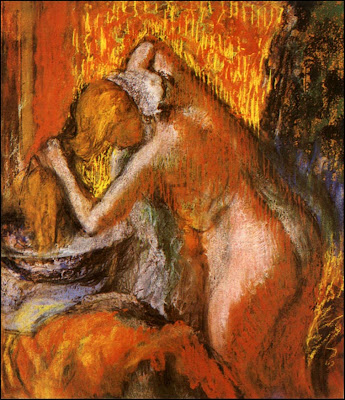 Almost a corollary to his depictions of dancers, Degas’ views of bathers equally show the female form from every angle. After the Bath (above), reveals the amazing pastel technique Degas developed over time. The strokes of pastel color actually seem to vibrate. The form is recognizable within the network of strokes, but seems somehow out of phase with the immobile pose, creating an illusion of movement. Blue Dancers (at top of post) also contains this illusory effect through drawing alone. Only Van Gogh produces the same illusion of vibrating color through the use of complementary and contrasting color. As far as I know, Degas and Van Gogh never met, but I’d love to have witnessed the two of them talk shop. 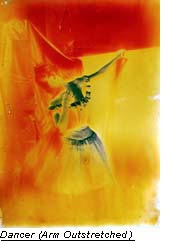 Degas took his obsessions into almost every medium available: etchings, printmaking, and even photography. The photo above shows a young dancer striking the pose Degas uses for the dancer on the left in Blue Dancers. When Degas accidentally overexposed the glass plate, damaging the image, he then treated the surface with chemicals that turned it yellow and orange. From this accident, Degas created a new, strange type of art. The Metropolitan Museum of Art in New York ran an exhibit of Degas' photographs in 1998, showing his many photos of friends and fellow artists, all arranged with that unique Degas touch. Unfortunately, Degas soon grew bored of photography, feeling that he had exhausted its possibilities for his art, and followed the wanderlust of his imagination on to the next project and the next medium. 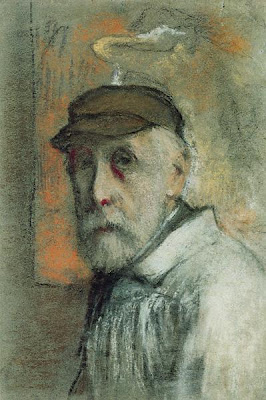 The more that I read about Degas the artist, the more that I love him. As seemingly closed as his world of subjects seems, the variation within those genres approaches infinity. His prolific nature fortunately leaves us many documents of his development, leaving us to marvel at his genius. As effortless as his works seem, their lineage testifies to the creative struggle and never-ending exploration of Degas. Sadly, the more that I read about Degas the man, the less I want to know. His misogyny seems famous now, Mary Cassatt being the one notable exception. Even more tragic, Degas’ anti-Semitism, which surfaced completely during the Dreyfus Affair, a litmus test of tolerance for all of 19th century France, cost him his friendships with Renoir and Cezanne and continues to plague his reputation today. Degas ended his days nearly blind, walking the streets wearing dark glasses and then returning to his solitary existence. Many of the works we see today were only found after his death—never intended to be seen by the public. This enigmatic nature of Degas, a soul seen through a glass darkly if there ever was one, makes the beauty of his images resonate even more deeply for me.