More Than Just a Kiss 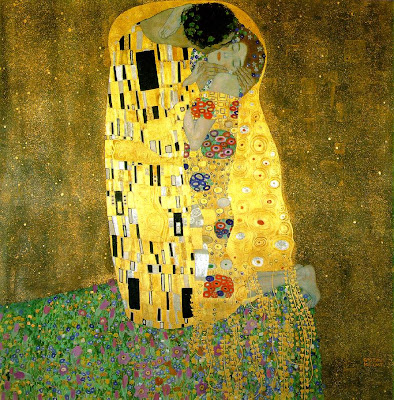 Is there any more reproduced yet misunderstood image than Gustav Klimt’s The Kiss (above)? Klimt, born July 14, 1862, receives many gushing romantic “oohs” for his work as it hangs in reproduction on the walls of homes and offices. But look a little closer. The woman turns away from the man’s kiss, perhaps in submission, perhaps in refusal. The woman’s arms and hands seem bent awkwardly, as if in a struggle. Finally, the feet of the woman dangle precipitously over the edge of a flowered cliff, as if she were being pushed into the abyss. Although Klimt believed in strong women and the power of love, The Kiss is not necessarily the place to be looking for either in his work. 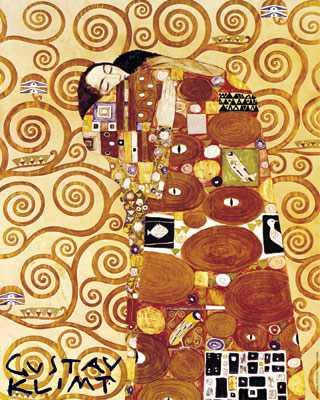 Klimt’s The Embrace is everything The Kiss is supposed to be. The couple both stand and there is a sense of mutuality free of any resistance by either party. In fact, the woman seems to be actually supporting the man with her strength. Also, the symbolism of Klimt’s decorative robes indicates an integration of souls that The Kiss does not. In The Kiss, the man’s robe of squared shapes stands in contrast to the woman’s robe of circular objects—and even threatens to engulf the woman’s form. In The Embrace, the squares and circles of the robes melt together, symbolizing the union of male and female, the marriage of true minds. The dark, forboding background of The Kiss also gives way to the exuberant Art Nouveau swirls of The Embrace, indicating to the viewer that life and love live here. 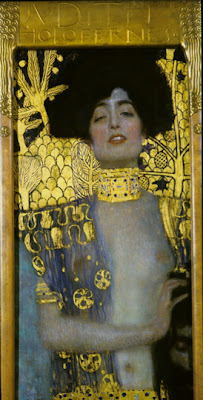 Klimt’s paintings exemplify the wonders of the Art Nouveau style. Taking the gold engraving skills taught to him by his father, Klimt decorated some of his works with actual gold. In Judith and the Head of Holofernes (above), Klimt even engraves the title of the painting at the top. Klimt’s use of gold brings an ancient, almost Byzantine feel to many of his works. Seeing one of these golden paintings in person is almost a religious experience. Many of the women in Klimt’s works seem like religious icons in such golden contexts. Adele Bloch-Bauer, subject of the portrait purchased by Ronald Lauder for $135 million USD for the Neue Galerie in New York, is only one of the many powerful women placed upon a pedestal by Klimt. 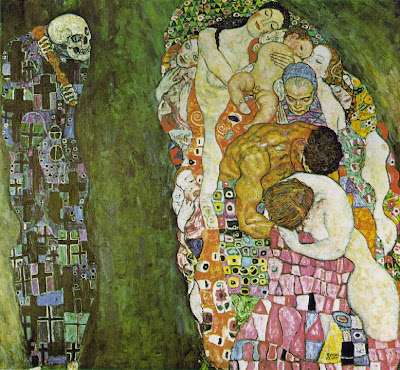 Klimt’s symbolic style of painting emphasized his personal spirituality and optimism. In Death and Life (above), the skeletal figure of Death on the left, decorated with cross-like figures (perhaps a commentary on conventional Christianity), seems small and weak beside the wide column of living humanity on right, where men, women, and children coexist in a cocoon of integrated circles and squares, indicating the harmony of the sexes and the vibrancy of life. Egon Schiele drank in Klimt’s overflowing spirituality and patterned much of his own life-affirming art on his predecessor. Personally, Klimt has always been one of my favorite artists of all time. Getting to know his works and his philosophy can be an eye-opening experience. Sometimes a kiss is more than just a kiss.