Fanfare for a Common Man 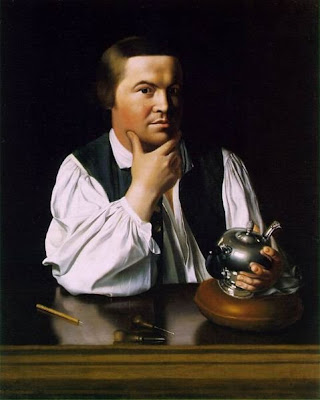 John Singleton Copley, one of the greatest artists of Colonial period America and the finest portraitist of pre-Revolutionary Boston, was born on this date in 1738. With portraits such as that of Paul Revere above, Copley brought the same grandeur and prestige to middle class merchants in the colonies as other portraitists had brought to the crowned heads of Europe.

Revere, famous subject of Longfellow’s “Midnight Ride,” holds one of his silver crafts in his hand in Copley’s portrait, part of the artist’s technique to replace the trappings of power in the portraits of royalty and create a new social dynamic in America through the portrait. Young America’s identity as a democratic society composed of individuals who rose on their merits rather than their lineage owes much to Copley’s portraits of men such as Revere, Samuel Adams, and many others. 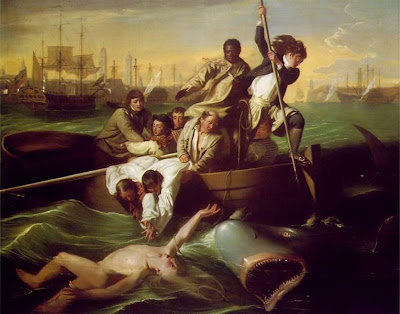 Copley’s most dramatic painting, Watson and the Shark (above),[*] tells the story of Brook Watson, who survived a vicious shark attack in 1749 and rose to become Mayor of London. Watson, an orphan at a young age, lost his right leg below the knee to a shark while swimming in the waters off of Havana, Cuba—one of the first fully documented accounts of a shark attacking a human. Copley avoids a graphic depiction of Watson’s wounds by having the right leg trail off in the watery depths. Amazingly, considering the medicine of the time, Watson survived and thrived. Watson commissioned the painting from Copley so that it could be hung in a hospital as an example to youth that any disadvantage can be overcome with enough determination. Copley’s depictions of Watson and Revere both celebrate the power of the individual not only to overcome any obstacle but also to inspire others to rise themselves.

([*] It would be unkind to point out in the middle of Copley’s and Watson’s inspirational moment just how bad the depiction of the shark in Watson and the Shark is. Copley obviously never saw a live shark, but most likely only preserved jaws. His shark not only has forward-facing eyes, but also rather prominent lips. Nonetheless, the drama of the painting, including the poses of all those on the boat frantically trying to save Watson, more than makes up for the unfortunate shark. Cue the “Theme from Jaws” here, just in time for beach season.)
Posted by Bob at 5:53 AM