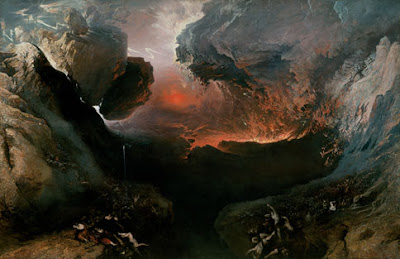 John Martin, visionary and sometimes apocalyptic painter of 19th century England, was born on July 19, 1789. The Great Day of His Wrath (above) by Martin is only one third of an apocalyptic triptych with The Last Judgement and The Plains of Heaven, all now owned by the Tate Britain. Martin included among the soon-to-be heavenly host of his Last Judgement many artists and poets, and even published a handy guide to his version of the saved and the damned. I can only wonder which list William Blake, his contemporary and in many ways kindred spirit, was on. 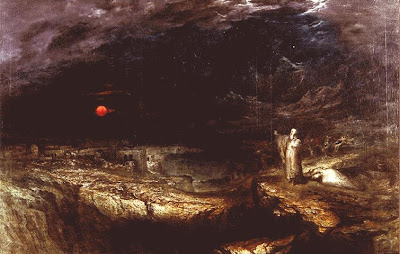 Martin’s work heralds the atmospheric and Romantic strain of English painting to come in the works of J.M.W. Turner. With his wild skies and wilder landscapes, Martin comes tantalizingly close to Turner’s level of excess but ends up just a trifle short. In The Last Man (above) from 1849, Martin may allude to Mary Shelley’s post-Frankenstein novel from 1826 of the same name. Although Martin himself was not a poet-painter like Blake, he clearly embraced the beginnings of Romanticism in literature as well as art, as could be judged by his inclusion of poets with the painters in his vision of Heaven. In The Last Man, a lonely figure looks back upon the ruins of civilization, crowned by a blood-red sun. Such an image of individualism against a forbidding backdrop compares favorably with the works of Caspar David Friedrich. 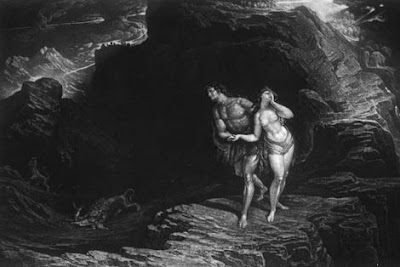 In 1823, Martin received a commission to illustrate John Milton’s Paradise Lost, one of the most influential classic texts for the Romantics, especially Blake. Above is Martin’s depiction of The Expulsion, the banishment of Adam and Eve from Eden, as told in the last lines of the last book of Milton’s epic:

They, looking back, all the eastern side beheld
Of Paradise, so late their happy seat,
Waved over by that flaming brand; the gate
With dreadful faces thronged and fiery arms.
Some natural tears they dropped, but wiped them soon;
The world was all before them, where to choose
Their place of rest, and Providence their guide.
They, hand in hand, with wandering steps and slow,
Through Eden took their solitary way.

Martin’s Adam and Eve resemble many of Blake’s hypermuscular figures—mythology on steroids. Martin’s landscape, however, excels anything done by Blake, rendering it in beautifully etched detail but also capturing the tumult of emotions of the first man and woman taking “their solitary way” out of Eden’s Paradise.