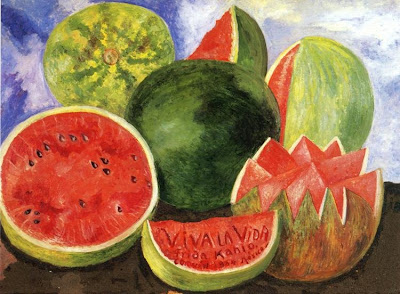 Today marks the 100th birthday of Frida Kahlo, one of the most original painters of the 20th century and perhaps the greatest female self-portraitist ever. Eight days before her death in 1954, Kahlo finished the painting above by writing the words Viva La Vida (or “Long Live Life” in English) on the center watermelon. Even in the midst of her pain, Kahlo could find some reserve of joy in life and express it through her art in full, abundant color. 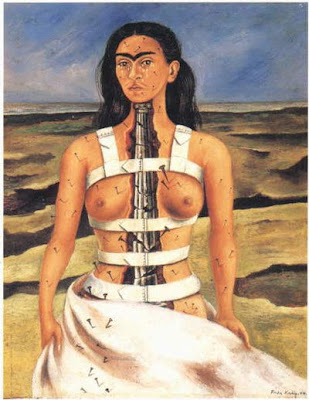 Anyone who has seen the magnificent Salma Hayek film of Kahlo’s life is familiar with the details of her life. The child of a German father of Hungarian Jewish descent and a devout Catholic mother of Mexican-Spanish-Native American ancestry, Frida contracted polio at the age of six, beginning a life-long affair with agony that peaked at the age of 18, when she was involved in an accident between the bus she was riding on and a trolley car. Frida suffered a broken spine, collarbone, ribs, and pelvis; a fractured and dislocated foot; a dislocated shoulder; and the piercing of her abdomen and uterus by one of the bus’ iron handrails. In The Broken Column (above), Frida depicts with brutal honesty the depths of her agony. The thirty-five surgeries she underwent during her life did little to relieve her pain. 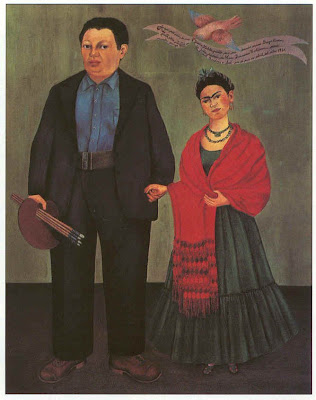 Even the love of her life, Diego Rivera, became a source of pain for Frida. Their dual portrait above shows them in happier times, before Rivera’s philandering became too much for their relationship to endure. Frida suffered multiple miscarriages during their marriage, due mainly to her injuries years before. Kahlo, too, had affairs during their marriage, with both men and women, most famously with the Russian Communist Leon Trotsky. 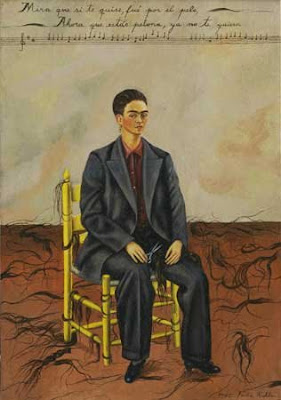 In Self Portrait With Cropped Hair (above), Kahlo assumes the clothes and hairstyle of a man, perhaps acknowledging her bisexuality. Kahlo definitely played with the concept of gender roles and identity in many of her portraits, which I’ve always seen as the strongest aspect of her oeuvre. Life in all its many facets, its heights and depths, was a laboratory on which her imagination continually experimented. Three days before her death, Kahlo writes in her diary, “I hope the exit is joyful—and I hope never to come back.” Rumors persist that she may have ended her own life (understandable in light of her pain), but nothing can end her presence in the world of art. We can only hope her end was joyful, just as we can only hope that she never truly leaves.

[I was very excited to see that the PMA has scheduled an exhibit of Kahlo’s work for February 2008 to celebrate this centennial. The accompanying catalogue will feature work by Hayden Herrera, whose biography of Kahlo remains the cornerstone of any research into Frida. The Museo del Palacio de Bellas Artes in Mexico plans to stage the greatest exhibit of Kahlo’s art ever assembled this year.]
Posted by Bob at 6:21 AM

If you are a fan of Frida Kahlo, you may really appreciate Claudia Fernety's work, much of which is Kahlo-inspired!

Thanks to the link to Claudia Fernety's paintings. I've never seen her stuff before, but it's certainly interesting and has some Frida flavor. I recently saw a show in Olde City Philadelphia by Anne Faith Nicholls at Lineage Gallery and was struck by how open she was in terms of Frida adulation, which isn't a crime. I think that more women artists have come to embrace Frida as a role model. I wonder how much the movie may have helped that along, too.

It should be known that when we were dating, when asked who would be on his "List" (a la "Friends"), my husband answered "Salma Hayek." So there may be some bias toward her movies... ;)

I may have had a "list," but I never had it laminated.