The Sadness Will Last Forever 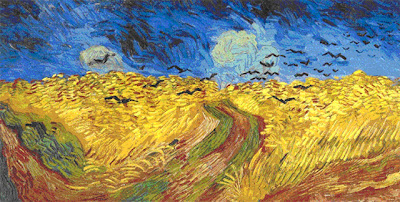 I usually don’t commemorate anniversaries of deaths here, but I’ll make an exception for an exceptional painter. On this date in 1890, just days after painting Wheatfield With Crows (above), Vincent Van Gogh goes walking in that same field, steps behind a haystack, and shoots himself in the chest. Amazingly, Van Gogh struggles back to his room at a nearby inn, telling no one of what he had done. When the innkeeper finally discovers Van Gogh’s condition, he calls for Dr. Gachet, Vincent’s physician and friend. (Van Gogh’s Portrait of Dr. Gachet is below.) Gachet realizes the severity of Van Gogh’s condition and sends word to Vincent’s brother, Theo. Theo arrives the next afternoon at Vincent’s bedside. “The sadness will last forever,” Vincent tells his brother as death approaches. Vincent dies at 1:30 am on July 29, 1890. The Catholic church at Auvers refuses to bury Vincent because he has committed suicide (the standard practice at the time), so they move him to nearby Mery, where he is buried on July 30th. 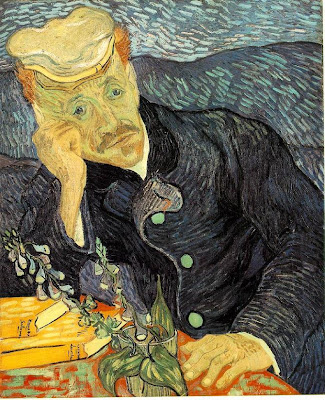 In retrospect, we can see the desperation and agitation of Van Gogh’s mind in his Wheatfield With Crows. As Simon Schama remarks during the Van Gogh chapter of The Power of Art, we don’t know if the crows, black as death against the throbbing blue sky and golden wheat swaying in the wind, are coming or going, attacking or leaving. Is this Van Gogh foreshadowing his own death in the approaching crows or overoptimistically trying to drive the self-destructive impulses away? Similarly, in retrospect, we read in the portrait of Dr. Gachet the sadness and, perhaps, frustration he felt over Van Gogh’s demise. Despite his best efforts and those of Theo, Van Gogh couldn’t evade his destiny. I remember reading years ago the poet A. Alvarez’s book on suicide titled The Savage God: A Study of Suicide, where he wrote that “[s]uicide has permeated Western culture like a dye that cannot be washed out… One of the most remarkable features of the arts in this century has been the sudden, sharp rise in the casualty-rate among the artists.” Alvarez knew the tragic arc of suicide quite well, having witnessed the final days of the poet Sylvia Plath, whose poems haunt us in the same way that Van Gogh’s paintings do. Van Gogh’s story should seem well-worn now, after so much retelling, but his life, letters, and works continue to fascinate us. To use Alvarez’s phrase, Van Gogh’s paintings are “a dye that cannot be washed out.” And to use Vincent’s own words, his story, with its resonance for us even today, is a sadness lasting forever.
Posted by Bob at 5:53 AM