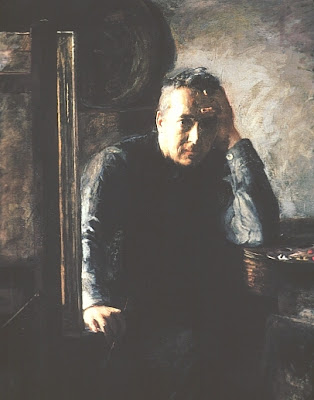 Thomas Eakins, the greatest painter ever born in my home town of Philadelphia and one of the greatest American painters of any era, was born on this date in 1844. Almost no other American artist of equal stature has had such a rollercoaster ride in terms of reputation. During his lifetime, Eakins rose to art world prominence with the painting of The Gross Clinic, his 1876 masterpiece. Sadly, even then he was denied mainstream success due to his sometimes abrasive personality and unrelenting intensity, which helped relegate The Gross Clinic to an obscure corner of the Centennial exhibition. The Gross Clinic, however, did help him in scoring a teaching position at the PAFA in 1876. By 1882, Eakins rose to the position of director at the school. However, his commitment to the study of the nude in Victorian American soon drew opposition from the school’s board, leading to his dismissal and disgrace in 1886. The portrait above, painted by his wife and former student, Susan MacDowell Eakins, shows Eakins in 1889 at the age of 45, disillusioned by experience and searching for new opportunities to further his art. 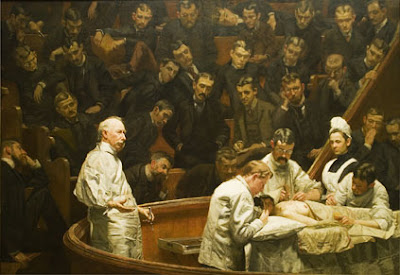 Susan painted Eakins’ portrait once again in 1889, as part of Eakins’ second medical masterpiece—The Agnew Clinic (above). Accepting a commission to paint the retiring Dr. Agnew, Eakins designed an epic canvas showing the doctor performing his signature surgical procedure while teaching his gallery of students. The size of the canvas forced Eakins to place it on the floor of his studio while painting. Agnew’s students filed through Eakins’ studio over the few weeks he had to finish. As Eakins painted personalized portraits of all the gallery sitters, his wife painted Eakins himself, along the right edge of the painting, leaning in and listening to one of the students explain the procedure to him. Eakins himself studied anatomy at Thomas Jefferson University, the home of Dr. Samuel Gross and formerly The Gross Clinic, to increase his understanding of the human body and how it moved. 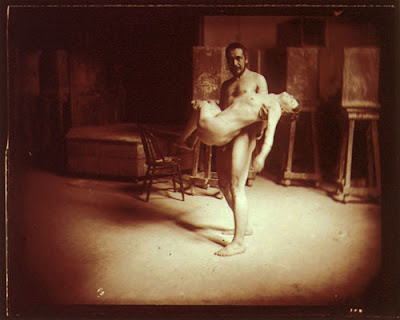 The same commitment to the nude that makes Eakins seem heroic from a modern perspective also makes it sometimes too easy to see him as perverse. Nude photographs taken of Eakins himself and his students (such as that above, perhaps the most notorious of the bunch, since it involves physical contact between Eakins and his student) have been used by critics such as Henry Adams in his Eakins Revealed to portray Eakins as a social deviant. I remember reading Adams’ book and coming away quite dismayed, wondering if Eakins was truly a disturbed person and if that disturbed nature somehow infiltrated his art. These photos had been lost to scholars for decades, having been saved by Susan and then taken by Charles Bregler, a former student of Eakins, after her death. Bregler and his widow then saved the artifacts until her death in the 1980s, when scholars discovered the trove and began to study it, releasing these new findings in the Thomas Eakins Rediscovered exhibit at the PAFA in 1991. Adams sees the long span of time when such photos and other effects of Eakins were hidden as evidence of Eakins’ guilt and the continued efforts of his wife and followers to cover it all up. Eakins’ earliest biographer, Lloyd Goodrich, comes across in Adams’ critique as complicit in the cover-up in exchange for Susan’s cooperation and the source of all the “good Eakins” mythology. Fortunately, Sidney Kirkpatrick’s The Revenge of Thomas Eakins serves as a necessary corrective to Adams’ slander, neither mythologizing nor denigrating Eakins but, instead, fairly presenting him in context. 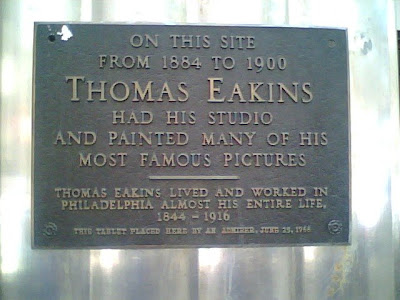 Eakins’ revenge on those who marginalized him in life has been slow in coming. Philadelphia’s embrace of its greatest artistic native son has been more cool than warm. An inconspicuous plaque (above) marks the site (on Chestnut Street between 13th Street and Broad Street in Philadelphia, across from a Borders Book Store and just down from an Olive Garden Restaurant) where Eakins painted The Agnew Clinic and other masterworks from 1884 through 1900. Even that was placed there by an admirer just in 1966 to commemorate the 50th anniversary of Eakins’ passing. The circus surrounding the sale of The Gross Clinic seems to have awoken the city to the presence of Eakins’ greatness in its midst. The PAFA, which rejected Eakins over a century ago, now employs an actor to play the role of Eakins for visitors. Their attempt to resurrect Eakins for future generations seems the least that they can do for an artist who they nearly buried while alive.

I must confess to an overwhelming personal affinity for Eakins that clearly comes through in anything I write about him. I’ve read pretty much every major text on him and have seen almost all of his major works, thanks mainly to the Thomas Eakins exhibit at the PMA in 2002. Eakins will always remain the central figure of American art for me, the axis upon which all his predecessors and ancestors turn in my estimation. I’ll never forget the day back in graduate school when I received an award for an essay I had written and the reception was held in a little-used conference room at the university. In that room was a portrait by Eakins of one of the founding fathers of the university. The moment I saw it, I realized it was an Eakins. The signature confirmed it. I kept asking the organizers of the reception what they knew about it, but no one seemed as impressed as I was. Even worse, the portrait was hung in direct sunlight, damaging the lower half. That experience encapsulated for me the plight of Eakins and his art right there: unquestionable artistic genius wounded by ignorance and outright neglect. Since then, the painting has been moved, repaired, and even proudly featured in the university’s magazine, so maybe the times are truly changing for Eakins.

[Also , BTW, the Philadelphia Inquirer recently ran a three-part series by sportswriter Frank Fitzpatrick on Eakins’ boxing, baseball, and rowing pictures as they relate to the dawn of professional sports in America.]