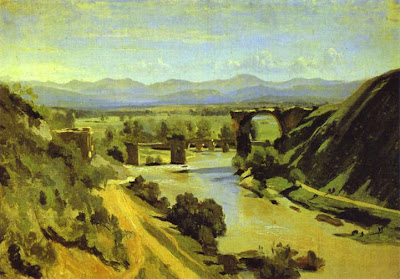 “There is only one master here—Corot,” Claude Monet once said. “We are nothing compared to him, nothing.” Jean-Baptiste-Camille Corot was born on July 16, 1796 and for the next 78 years of his life made the world more beautiful through his paintings and through the profound generosity of his spirit. A member of the French Barbizon School of landscape painting in the first half of the 19th century, Corot spent the second half of the 19th century helping usher in the Impressionist generation. Works such as his The Bridge at Narni (above) from 1826 attest to his earlier Barbizon style, a softened but still realistic depiction of nature that still looked back to the influences of his youth—Claude Lorraine and Nicolas Poussin. 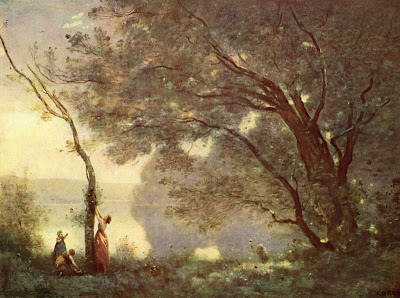 Souvenir de Mortefontaine (above), painted nearly 40 years after The Bridge at Narni, shows the evolution of Corot’s style. Corot softens nature even more, paying greater attention to the effects of light, thanks in large part to his adoption of the en plein air painting style. Monet and the other Impressionists saw Corot as a father figure during the early days of their artistic revolution. Despite being 68 years old when Souvenir de Mortefontaine was painted, Corot maintained a clear eye and a sharp wit to go along with the generosity he showed to the younger generation of artists. Corot’s generosity was legendary in his time. In 1872, Corot donated what would be thousands of dollars today from the sales of his paintings to help the poor of Paris suffering the effects of the Franco-Prussian War. When Corot’s fellow artist Honore Daumier found himself homeless after blindness left him unable to paint, Corot bought him a home. Corot also favored a home for children in Paris with his loving support. 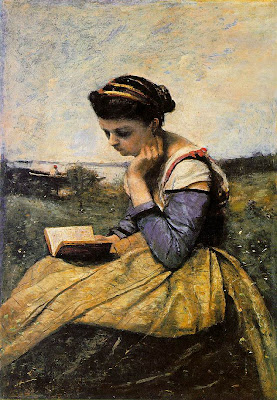 Whereas Corot’s landscapes influenced Monet and other Impressionist landscapists, Corot’s portraits took hold of the imagination of later artists such as Edgar Degas and Pablo Picasso. Corot brings the same softness, color, and light to his figures as his landscapes, which inspired Degas in his depiction of the figure as well as Picasso in his more classical periods. Woman Reading is from 1869, when Corot was 73 years old, yet he depicts her as lovingly as a young suitor. Perhaps it was his many acts of charity that made his heart forever young.

[This belated birthday to Corot is brought to you courtesy of the technical difficulties I experienced a while back.]

beautiful paintings
i likes the bright colors used in it