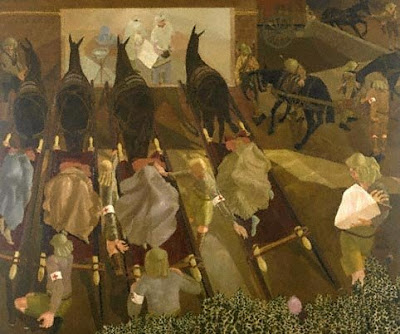 Sir Stanley Spencer, British painter of both World War I and II, was born on June 30, 1891. Spencer’s painting from the First World War, Travoys Arriving, with Wounded at a Dressing Station at Smol, Macedonia, September 1916, appears above. The combination of modernist and primitive techniques Spencer made his own led to such unusual perspectives as this bird’s eye view of wounded men on stretchers, a sight Spencer knew firsthand from his own service in the British Army in World War I. 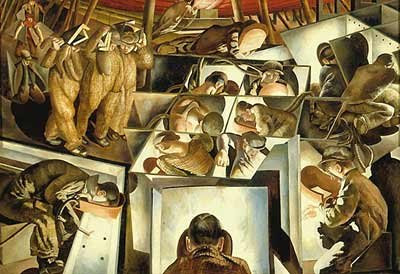 The British government asked Spencer to be a War Artist during World War II, since he was too old to serve in the military. One of the eight panels of his Shipbuilding on the Clyde (above) shows welders working on the metal plates of a battleship. In addition to being a patriotic scene of the home front war effort, Spencer’s painting shows the influence of Piero della Francesca and the Italian “primitive” approach. Piero’s unique use of architecture and composition (taken in an absurdist direction by artists such as de Chirico) becomes in Spencer’s hands a re-visioning of the battleship as modern cathedral. Roger Fry and Clive Bell, the two most influential British critics of Spencer’s formative years, helped revive the reputation of Piero and the Italian “primitives” and clearly influenced Spencer’s work.


Another artist championed by Fry was Gauguin, whose spirituality refashioned in Tahitian garb freed Spencer to refashion his own devout Christianity. In The Resurrection, Cookham (above), Spencer speculates as to the events of the second coming in his own home town of Cookham, England. The simple people of his home town burst from their graves, similar to the scenes of Renaissance art, but surrounded by the homely accoutrements of 20th century small-town England rather than some fictional plain. Spencer received a knighthood for his paintings for his country, which not only documented the suffering of war but also pointed towards a brighter future, in the next world if not this one.
Posted by Bob at 5:47 AM

My inaugural address at the Great White Throne Judgment of the Dead, after I have raptured out billions! The Secret Rapture soon, by my hand!
Read My Inaugural Address
My Site=http://www.angelfire.com/crazy/spaceman