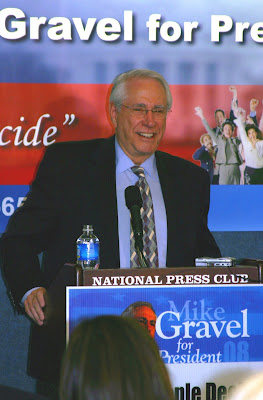 Art Historian Crispin Sartwell profiles the unusual and perhaps artful political campaigning of Democratic Presidential candidate Mike Gravel (above) in the July 5th issue of The Los Angeles Times. Unknown to most Americans, Gravel’s campaign hopes to create a splash, or at least a tiny ripple, with their unconventional video advertisements on YouTube.

Mike Gravel served as a Democratic Senator from Alaska from 1969 to 1981. Gravel staged a one-man filibuster in 1971 that eventually forced the Nixon Administration to end the military draft in the United States, effectively ending the Vietnam War. He further endeared himself to the Nixonistas by reading The Pentagon Papers, documents revealing many illegal activities deepening American involvement in the Vietnam War, into the congressional record and thus making them available to the public in 1971. No stranger to controversy, Gravel dives into today’s political fray with an equally interesting and artistic statement.

In one Gravel2008 YouTube advertisement, Gravel stands before a pond and stares into the lens of the camera for over one minute before turning, picking up a rock, flinging the rock into the pond, and finally walking away, never speaking a word. In another, Gravel silently gathers wood and starts a fire, which the camera lingers on for 7 more minutes. In such images, Sartwell says, Gravel has “taken the pabulum and kitsch that is our political art and transcended it—swept it up, summarized it and broken through it into a new range of possibilities. Mike Gravel is to political advertising what Ralph Waldo Emerson is to the essay, Walt Whitman to poetry, Jackson Pollock to painting, 50 Cent to bullet wounds. He is the avant garde of the new artpolitical era.” High praise, indeed.

But seriously, there should be a place for such advertising to impact on the political and aesthetic consciousness of the average American. Gravel’s videos are as much political statements as political and aesthetic correctives. Americans receive such a battering of visual information (and disinformation) daily that such silent, nuanced presentations, leaving so many blanks to be filled in, so much room for interpretation and (*gasp*) critical thinking, that the most common responses are bafflement, angry derision, or (as I believe in Sartwell’s case) gentle mockery of a Don Quixote tilting at modern windmills.

I see Gravel’s ads as a needed troubling of the waters, hopefully creating a ripple effect that will gain momentum as it widens, or as that vital spark necessary to inflame Americans to re-stoke the fires of liberty. Of course, that’s just my interpretation, but that’s the appeal of Gravel’s video art—it makes you think, like all true art should. Unlike so many political ads that tell you what to think, Gravel’s ads actually ask you to think for yourself. Gravel clearly has little chance of winning the nomination or even coming close, which makes his campaign even more interesting and these ads even more inspiring. Here are political ads that aren’t for the candidate. They’re for the people.