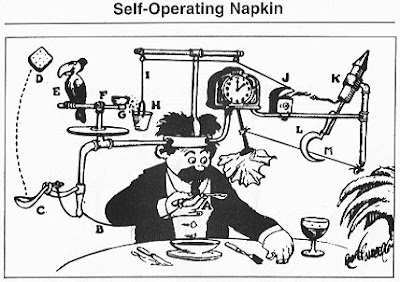 Rube Goldberg, father of the Rube Goldberg Machine cartoon, such as the Self-Operating Napkin (above), was born on the Fourth of July, 1883. Goldberg mastered nearly every style of cartooning there is and his inventions have entered the English language as a synonym for overly complicated solutions to simple problems. 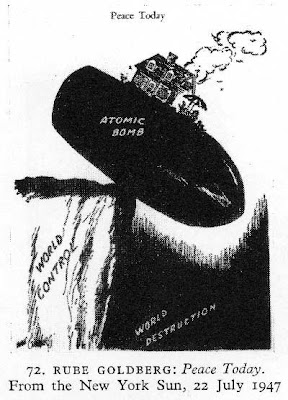 Goldberg defined “prolific” during his cartooning career, writing several strips for several papers for decades. In 1938, Goldberg turned his hand to political cartooning. His Peace Today cartoon (above), placing a typical house on a nuclear bomb teetering on the brink of world destruction, won him the Pulitzer Prize for Political Cartooning in 1948. Looking back, it’s amazing that Goldberg could feel moved to make such a statement so shortly after World War II, when America was still basking in the glow of its atomic-powered victory over Japan. Such prescience is lost in the more popular image of Goldberg as the clownish creator of madcap machines.

Goldberg’s machines hint at the Surrealist and Pataphysical in many ways, hinting at a sophistication and awareness of modern art movements that his moniker “Rube” belies. Near the end of his life, well past the age of 80, Goldberg put down his pen and became a sculptor, realizing some of his famous machines in three dimensions. Rube Goldberg is one of the unjustly degraded artists of American history because of his chosen field of cartooning. If only he were still around, he’d be able to construct the machine that could right that wrong, too.
Posted by Bob at 6:25 AM