In his 1955 memoir titled It’s Me, O Lord, Rockwell Kent wrote, “There is a deeply satisfying finality about land’s end. Gone is that everlasting urge the island traveler feels to journey on and on; there are not further peaks to beckon you; you have attained the absolute.” Born June 21, 1882, Kent remains in many ways the American equivalent of England’s William Blake—a bold visionary who expressed ideas of the absolute in words and pictures. Kent’s And Women Must Weep or Shipwreck, Coast of Ireland (above, from 1927-1928) captures this sense of the absolute power of nature while simultaneously depicting the place of humanity within it. Kent studied under both Robert Henri and Abbott Thayer, two of the most spiritually oriented artists in America at the turn of the twentieth century. Henri believed deeply in vitalism and Kent clearly shared that same faith in an electric force in the universe far greater than any individual being. Kent is best known for his amazing illustrations in black and white for such classic works as Herman Melville’s Moby-Dick, which was only rising to status as the Great American Novel when Kent illustrated a 1930 edition. As much as I love Kent’s graphic work, I think he gets even more cosmic in color. 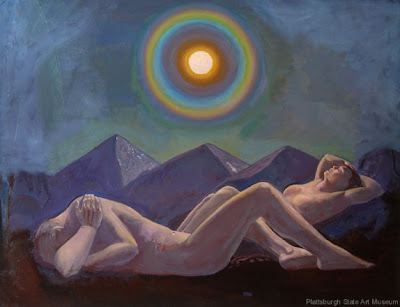 Nudism and the cult of the body reigned in Europe in the first few decades of the twentieth century, but I’m not sure if Kent took that as his source for works such as Recumbent Nudes with Ringed Sun (above, from 1914). It’s entirely possible that Kent simply arrived at this image by extending the Romantic and Transcendentalist philosophy to the human body itself, unashamedly nude before the nourishing sun. Heliotherapy, also known as sun or light therapy, may be the source of the ringed sun baking the bodies beneath. Regardless of whether Kent subscribed to those particular cures, he did believe that freedom of the mind and soul could cure anything. For Kent, the good fight was always the fight against oppression, which won him the honor of being a target of Joseph McCarthy in the 1950s. An incurable traveler, Kent visited all kinds of peoples and studied their cultures closely, which allowed him to see clearly the bare truth that we’re all human beneath it all.

As fascinating as Kent’s sense of the beautiful side of the absolute is, his sense of the sublimely terrible side fascinates me even more. Kent’s House of Dread, Newfoundland (above, from 1915) shows a naked man leaning against a house built on a cliff’s edge as a crying woman leans out of a window above. The sense of dread created by the ambiguity of the situation reeks of the most dreadful works of Edvard Munch. A member of the golden age of American illustration, Kent knew the power of images to tell a story. Here, Kent tells the other side of the story of the absolute, the one fragile humanity doesn’t like hearing. Kent built a similar home on a rocky peak in Monhegan Island, Maine, that is now owned by Jamie Wyeth, grandson of another great American illustrator, N.C. Wyeth. Jamie’s style resembles that of his grandfather more than that of his father, Andrew Wyeth, so he understandably felt a kinship with Kent both artistically and spiritually. After several decades of obscurity thanks to the hostile political climate of the 1950s, Rockwell Kent has been reconnected with the body politic of art history and reminded it that it has a soul, too.
Posted by Bob at 12:01 AM

I admired the art and the designs which shows the mood of the maker which gives some message ,its look beautiful and meaningful.Thanks for sharing.