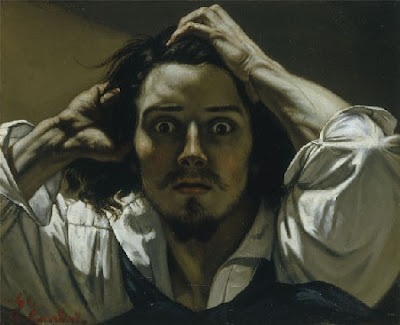 Freedom’s just another word for nothin’ left to lose,
And nothin’ ain’t worth nothin’ but it’s free,
Feelin’ good was easy, lord, when Bobby sang the blues,
And buddy, that was good enough for me,
Good enough for me and my Bobby McGee.

—From “Me and Bobby McGee” by Kris Kristofferson and Fred Foster

It takes a lot of self-confidence to paint yourself as a kind of madman. The basic premise of Jay A. Clarke’s Becoming Edvard Munch: Influence, Anxiety, and Myth (my review here) is that Edvard Munch adopted the persona of a disturbed man for both artistic and commercial reasons. Munch, like many other artists of the late nineteenth and twentieth centuries, followed the cue of the original artistic madman—Gustave Courbet. Born June 10, 1819, Courbet initiated a second “birth” with the Self-Portrait also known as The Desperate Man (above, from 1843). Courbet, of course, like Munch, had full command of all his senses. Armed with the knowledge that no publicity is bad publicity, Courbet courted controversy and positioned himself at the center of the Parisian art world for all to see. “I am the most arrogant man in France,” Courbet proclaimed and set out to prove it. Behind that arrogance, however, lay great talent—the “steak” behind the “sizzle.” What separates Courbet and Munch from the masses of self-promoters is that they always had the goods to back up the marketing.
In 1869, Courbet announced, “I am fifty years old and I have always lived in freedom; let me end my life free; when I am dead let this be said of me: 'He belonged to no school, to no church, to no institution, to no academy, least of all to any régime except the régime of liberty.’” Courbet isolated himself from all ties, yet never separated himself from the mainstream so far that his works lost all profitability. Like Edouard Manet would do just a short decade later, Courbet lived both in and outside the academy. Manet continued to paint in a mostly academic style, yet his subject matter broke new ground. Courbet broke new ground in turning the relationship of the artist and the patron on its head. In The Meeting, or "Bonjour, Monsieur Courbet" (above, from 1854), Courbet paints himself meeting two prospective clients. Their styles of clothing clearly demarcate Courbet as the poor bohemian standing before wealthy patronage. Yet, the patronizing is done by Courbet. The two men on the left doff their hats before him, like royalty. They address him first, rather than the other way around. Courbet clearly paints himself in the position of power, owner of a higher authority thanks to his artistic skills. There’s a great sense of democratic values in this painting in that Courbet suggests a meritocracy based on talent to supplant the previous hierarchy based on wealth and nobility. Courbet wrests the title from those in power and crowns himself king. 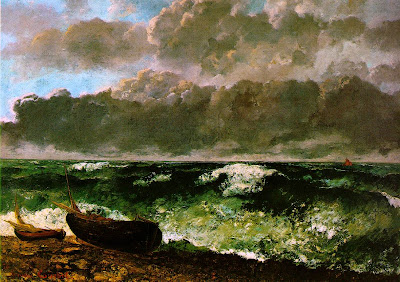 As I said, Courbet never lacked for confidence, or for the talent to back up his boasts. In The Wave (above, from 1869), Courbet puts aside brushes and moves paint around purely with palette knives, as if he could channel the very forces of nature through the power of his own will. Renoir so loved this work that he surfed the same turf a decade later in his own freeform version. To get such brilliant effects from gesture, those gestures need to be totally uninhibited, free of all hesitation. The Wave shows Courbet at his most self-assured, a king in his own artistic kingdom. Renoir and others aspired to that level of self-confidence to armor themselves against the blows of critics as Impressionism gained favor with the public. Courbet led by example. Paradoxically, his example taught others that you need to find your own way and not follow the example of others. Just as Courbet belonged to no school, there is no school of Courbet imitators slavishly mimicking his works. People who understood the true Courbet knew that the best tribute to him was to be as confident in your art as he was in his.
Posted by Bob at 12:01 AM

I just found your blog, and so far, I'm really enjoying it. Great discussion!