Am I Not a Man and a Brother? 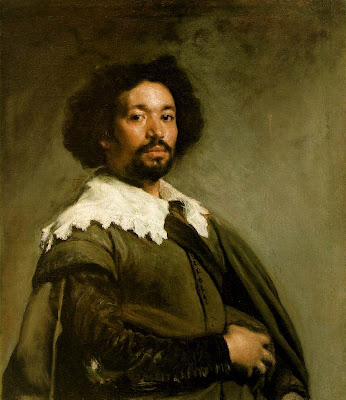 One of the most famous images from the early American abolitionist movement is the Society of Friends’ “Am I Not a Man and a Brother?”, dating roughly from the late 1780s. The Friends believed that slavery would end only when slaver owners admitted the humanity of the slaves. Until they accepted that basic fact in their hearts, no law could erase physical slavery’s underlying philosophy. Even though he painted members of the royal Spanish court in famous works such as Las Meninas and even spiritual leaders such as Pope Innocent X, Diego Velazquez continued to paint the underdog struggling under slavery in some form. Baptized June 6, 1599, Velazquez had only risen to the rank of court painter two years before when he painted a portrait of his own slave and assistant, Juan de Pareja (above, from 1650). Like Thomas Jefferson, Velazquez lived with the contradiction of being a humanist who owned humans. In this portrait, Velazquez deals with that paradox in his life by elevating de Pareja to the level of nobility, painting him wearing fine clothes and with a highly individualized expression on his face. de Pareja almost seems to look down his nose at the viewer, emphasizing the nobility of his humanity in the face of the world’s rejection based on his skin color. In fact, Velazquez taught de Pareja how to paint and brought him along on travels to Italy. Some believe that Velazquez painted de Pareja’s portrait in Italy to prove to Pope Innocent X that he was more than qualified to paint the papal portrait. There’s a great irony in the idea that the most powerful could be convinced by a portrait of the powerless. Velazquez (and de Pareja, too) certainly understood that. 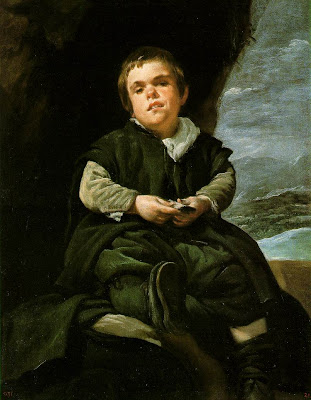 In 1645, Velazquez painted a different kind of “slavery”—the body’s enslavement by itself—in The Dwarf Francisco Lezcano (above, from 1645), which is also known as "El Nino de Vallecas." Velazquez paints all the details of retardation—the abbreviated limbs, the head too large for the body, the unfocused expression in the eyes—without showing any disrespect for the subject. Lezcano holds a deck of cards in his hands, which commonly symbolized a fool in the iconography of the time. Rather than making Lezcano play the fool, however, Velazquez instead shows how the teenage man, on the brink of manhood, deals with the cards life had dealt to him. Velazquez paints in the background a landscape rolling off into the distance, which, in portraits of kings, commonly represented the kingdoms they ruled over. I see that landscape as representing the inner kingdom that Lezcano rules within himself—a mysterious land that to which we will never find admittance. What seems an unfocused look in Lezcano’s eyes may instead be a turning within, a focus on the universe within. The nickname “El Nino de Vallecas” hints at the old practice of viewing the retarded as holy figures “touched” by the hand of God. Velazquez gently touches Francisco Lezcano with a similar reverence here. 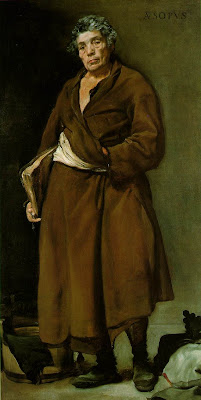 In 1640, Velazquez painted a portrait of the legendary Aesop (above). The fabled author of the famous Aesop’s Fables may never have actually existed, but the legends tell of an ugly, crippled slave who bought his freedom through wise tales of human virtue and flaws. Many of the aspects found in the later portraits of the crippled Francisco Lezcano and the slave de Pareja appear first in this portrait of Aesop, whom Velazquez pieced together from imagination rather than from a real-life model. John Singer Sargent, fascinated with this portrait, copied the head of Aesop during one of his visits to the Prado in 1879. Sargent, the greatest portraitist of his age, recognized the greatness of this portrait, which depicts so much about humanity without being about a certifiably “real” person. Aesop looks out from Velazquez’s portrait and asks “Am I not a man and a brother?” not just for himself but for all people through the ages. Velazquez kept company with kings, but he never lost the common touch.
Posted by Bob at 12:01 AM

Reading your articles is a way of getting enlightened.
I know little about Velazquez, but sure enjoyed this article and now feel a tad more bright :-)
Reading this and relating it to nowadays, maybe one could infer that mankind didn't evolve that much in terms of humanity....

I tried to think of all the portraits I have seen in my career, to select my favourites. Raphael’s “Portrait of Baldassare Castiglione”, Velazquez’s “Juan de Pareja” and Titian‘s “Man with a Blue Sleeve” are amongst my all time favourites.

In the Velazquez portrait, you suggested that the artist elevated de Pareja to the level of nobility, painting him wearing fine clothes and with a highly individualised expression on his face. I would agree with that, even if the viewer did not realise that Pareja was a slave. But all my favourite portraits share the same depth of character, the fine clothes and the rich painterly presentation. That is what made them special.

Hi Bob--
I'm curious about your comment here that "Velazquez taught Juan de Pareja to paint." I've been researching the slave and have found conflicting information--some of it indicating that Pareja learned to paint in spite of Velazquez's opposition. Some sources quote the famous painter's belief in Aristotle's theory of "natural slaves and masters." Could you tell what source discussed Velazquez's tuteledge of Juan de Pareja? I'd be most appreciative.
Many thanks,
Margo
margo.newman@roadrunner.com

H i Bob--if you ever had any update on my question regarding Juan de Pareja, I'd still love to hear. My current email is 2margo.newman@gmail.com.
thanks,
Margo Newman