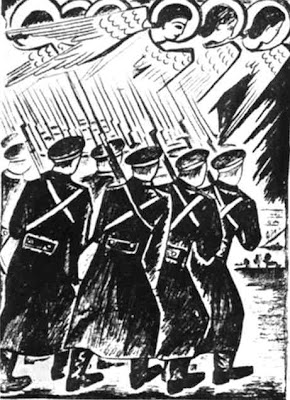 The idea of war as a thrilling, almost religious force is often associated with men, but it was a woman, Russian avant-garde artist Natalia Goncharova, who created one of the first visionary works of art celebrating World War I. Born June 16, 1881, Goncharova has been dubbed by some as one of the "Amazons of the avant-garde" and, like her mythical namesake, didn’t hesitate to join the fray when nationalist heat reached fever pitch in 1914. Goncharova’s print A Christ Loving Host (above, from 1914) belongs to a suite of fourteen prints she titled Mystical Images of War. Russia and many other countries in the Great War saw it as an opportunity to wage holy war in the name of their faith (with God, of course, “on their side”). Led by the Russian Minister of Religion, the Russian Orthodox church worked with the Russian military to persecute Jews, Muslims, and Catholics in Russia and neighboring areas such as Poland and the Ukraine. Whether Goncharova was aware of this persecution is unclear, but there’s nothing unclear about her faith in the justness and even holiness of the Russian cause in the war as she places angels literally on the shoulders of soldiers marching into war. The simplicity of these prints illustrates their public nature as they were meant to advertise to the public why they needed to support the war if they wanted to be part of the “Christ-loving host,” too. 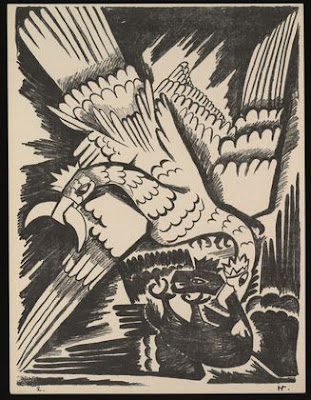 The Order of the White Eagle is a Polish medal of honor, but the Russian Tsars adopted the white eagle as a symbol for themselves as well. In another of her Mystical Images of War, Goncharova depicts The White Eagle (above, from 1914) swooping down and defeating a darker, more sinister bird in metaphorical combat. Adopting a totem animal such as the white eagle is part of Goncharova’s plan to use the myth and folklore of Russia itself to add symbolic weight to her modernist techniques. The slashing lines of her birds’ wings and talons convey a sense of the violence and speed of the fight. There’s a great sense of energy in this print, which is meant to thrill the viewer and incite participation in the war. The beginning of World War I in Russia saw a renaissance of the popular print broadside form known as the “lubki.” Although Goncharova works in the rarified air of the fine arts, her Mystical Images of War simultaneously get down in the streets with the people, whipping them into a frenzy to become avenging birds of prey as well. 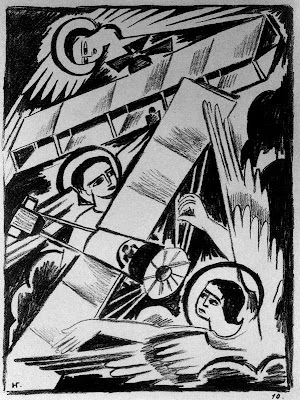 Goncharova was well aware of the art movements prevailing in Europe at the advent of the war. In 1912, she exhibited with Der Blaue Reiter in Germany and corresponded with Kandinsky. She painted many works similar to those of the Italian Futurists that resembling the work of Umberto Boccioni and Giacomo Balla. Goncharova’s Angels and Aeroplanes (above, from 1914) may be the most Italian Futurist of the Mystical suite, pairing the heavenly with the hellish instruments of war. She called her brand of Futurism Rayonism for the stylized rays radiating out in the images as well as radiating out a message to the masses of war and technology as a hope for the future. The angels’ wings spread out in Angels and Aeroplanes both in a protective fashion and to echo the wings of the planes, as if the planes were God’s instruments on Earth. Aside from being a fascinating document of the Russian avant-garde, Goncharova’s Mystical Images of War is a rare work of fine art celebrating war done by a top-notch artist rather than a propagandist hack. For someone as intelligent and sensitive as Goncharova to be swept up in the apocalyptic war mania, the impulse to call all angels into the service of her country’s cause must have been irresistable.
Posted by Bob at 12:01 AM

Nice story as for me. It would be great to read more concerning this topic.
By the way look at the design I've made myself Russian escort