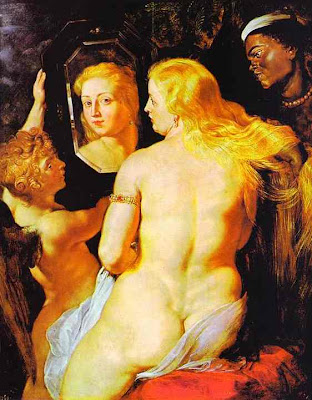 Oh, you gonna take me home tonight?
Oh, down beside that red firelight?
Are you gonna let it all hang out?
Fat bottomed girls, you make the rockin’ world go round.

—From “Fat Bottomed Girls” by Queen

Beauty is truly in the eyes of the beholder, especially ideals of female beauty, which vary by culture and era. These ideals of the past appear in the works of artists throughout time. The seventeenth-century in Europe must have been the era of the fat-bottomed girl judging by the works of Peter Paul Rubens, whose voluptuous vixens live on in the modern-day adjective “Rubenesque.” Born June 28, 1577, Rubens always had an eye for a girl with some meat on her bones. In Venus at a Mirror (above, from 1615), a decidedly non-waifish goddess admires her plump face in a mirror while presenting her broad back and ample rear to the viewer. A black woman attends to Venus on the right, a familiar trope of portraits examining beauty personified that Edouard Manet riffs on in the black handmaiden of Olympia. Sadly, the contrast between the black woman and the white goddess reflects the racism of the period, which could only find beauty in European tones. In modern day Hollywood, where slender Kate Winslet is seen as “Rubenesque,” Rubens’ Venus would be judged enormous, maybe even obese. 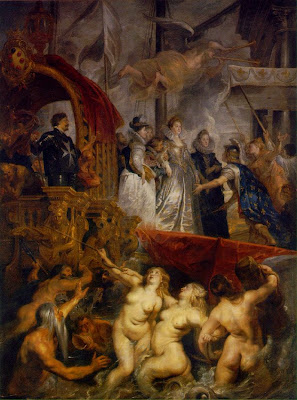 In the 1620s, Marie de' Medici, the queen-mother of France, commissioned Rubens to paint two allegorical cycles now known as the Marie de' Medici cycle to commemorate her life with the late Henry IV of France. One of those paintings, Rubens’ The Arrival of Marie de' Medici at Marseilles (above, from 1626), shows the young queen disembarking from the ship that had brought her from her native Florence, where she married Henry IV by proxy. A helmeted, blue-caped embodiment of France greets Marie on the gangplank. Beneath them, three buxom Nereids stand with Poseidon and other mythological sea figures that protected the new Queen on her voyage. Marie de’ Medici may be the intended center of attention, but the Nereids upstage her with their beauty, nudity, and fluidity. The rolls of their flesh roll like the waves themselves, making the sea goddesses seem to move even when standing still. By contrast, Marie seems statuesque in a bad way—cold, lifeless, and literally bloodless. There’s little promise of passion in the proxy marriage between Marie and Henry judging from this picture. 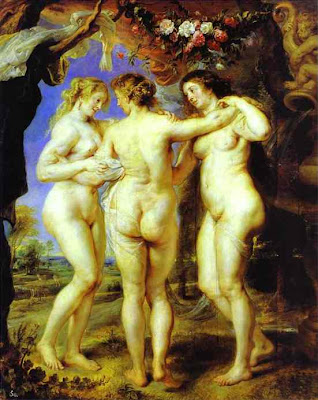 Rubens first wife died in 1626. Four years later, he married a voluptuous 16-year-old beauty named Hélène Fourment. Hélène became the muse of Rubens last years. She modeled at least one, and perhaps all three of the full-figured women in Rubens’ The Three Graces (above, from 1636). Granted, Rubens painted male figures who could use a gym membership, too, in works such as Bacchus (1640), but clearly Rubens’ ideal womanly figure was a full one. I guess it stands to reason that an artist with such a vigorous, omnivorous approach to life and art would admire women who also grabbed all the gusto they could. Rubens art does nothing by half measures, including portraying the female figure. Many primitive cultures worshiped a full-figured female type as the embodiment of fecundity. Despite being surrounded by the trappings of European civilization, Rubens “Rubenesque” ladies embody the fecundity of the primitive drives of his prodigious imagination.

I love fat bottomed girls :o) The Queen song is very good too..