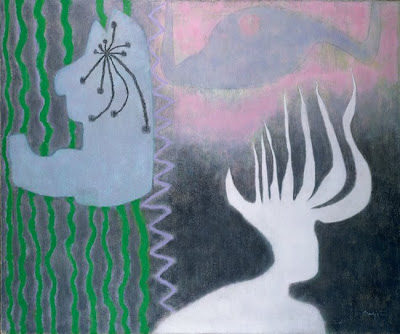 One of the reasons that modern art has left much of the public behind is the sheer weight of the theorizing that has gone into so many movements. The importance of a blank canvas buttressed by a manifesto leaves even some interested parties bewildered. What, then, should we make of the theory-less theorist—William Baziotes. Born June 11, 1912, Baziotes painted in a Surrealist style and frequented Abstract Expressionist circles with Mark Rothko and Robert Motherwell, but he resisted easy categorization. In 1947 he confessed his theoretical agnosticism in an essay titled, “I Can’t Evolve Any Concrete Theory,” a shocking admission in an age when Clement Greenberg and others wrung theoretical juice from everything at hand. Baziotes takes his cue from French Symbolist poets such as Charles Baudelaire. Yet, unlike other artists, such as Gustav Klimt or Edvard Munch, Baziotes leaves easily recognizable forms such as the human body behind. Instead, Baziotes subscribes to Baudelaire’s idea of “correspondences” in which all natural things are equal to the point that anything can symbolize a vast number of things. Baudelaire writes in the poem “Correspondences,” “Like prolonged echoes mingling in the distance/ In a deep and tenebrous unity, / Vast as the dark of night and as the light of day, / Perfumes, sounds, and colors correspond.” Baziotes translates Baudelaire’s mystic ideas into paint in works such as The Flesh Eaters (above, from 1952), in which biomorphic forms that look natural but resist identification interact to generate a narrative built by each viewer from the depths of their own imagination. The Flesh Eaters of the title can be cannibals, Polyphemus the cyclops eating Odysseus’ crew, or a larger metaphor for humanity’s self-consuming desires run amok. The possibilities, like nature, are endless. 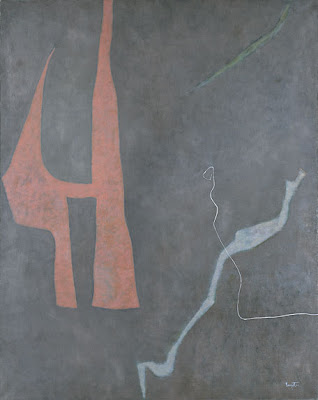 Baziotes worked extremely slowly, completing only one or two works during his prime years in the 1950s. While Jackson Pollock stepped on the gas and dripped his way to fame and infamy, Baziotes applied the brakes, quietly mediating over his works before allowing himself to begin the act of painting itself. "I want my pictures to take effect very slowly,” Baziotes claimed, “to obsess and haunt." Baziotes’ Dusk (above, from 1958) haunts through its elusiveness. The dusky pink shape and trailing ribbons of green, blue, and white are all that interrupt the pensive grey background. While teaching and painting in New York City, Baziotes frequented the Greek sculpture and pottery collections. Of Greek descent himself, Baziotes may have identified with the classical forms on multiple levels. The lines in Dusk resemble on one level the cracks in ancient vases they wear like the proud scars of millennia. Longing to replicate the eternalness of nature itself, Baziotes evokes the next best thing in terms of human creativity—the oldest and most lasting forms remaining. In many ways, Baziotes’ Dusk is his version of Keats’ Ode on a Grecian Urn. Both conclude that "’Beauty is truth, truth beauty,’ —that is all/ Ye know on earth, and all ye need to know." 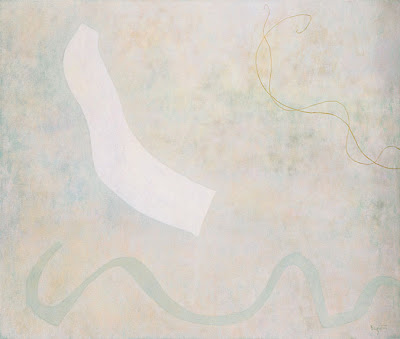 As with the work of Robert Motherwell, I see a lot of Zen in Baziotes’ painting. In the same vein, I also sense a lot of Jung in Baziotes’ approach. In works such as Aquatic (above, from 1961), Baziotes looks to tap into what Jung called “the collective unconscious.” Again, the forms look like something we’ve seen in reality but Baziotes’ skews them just enough to make them seem dreamlike. In Aquatic, Baziotes becomes an artist of the floating world, riding the currents of his unconscious with the faith that his audience will meet him on the same high seas. As with the connection to ancient sculpture in Dusk, Aquatic connects back to the primordial sea, the source of all life on Earth. Baziotes titled this work to make the sea link clear, but I think the imagery itself would eventually lead most onlookers to that watery source. I began with the idea that Baziotes was theory-free and then proceeded to drop the names of Baudelaire and Jung to impose theory on him once again, whether Baziotes wanted to or not. Strip away all these ideas and even the titles of the works, however, and you still find yourself drawn to them as if called by something instinctual. It’s unfortunate that Baziotes’ art is often swamped by the bigger names of American art in the 1950s, but the intentional timelessness of his works gives them a “patience” that still may one day be rewarded.

I'm happy to find numerous useful info here in the post. I would really like to come back again right here for likewise good articles or blog posts. Thanks for sharing...
Top 10 Hotel Management Colleges in India