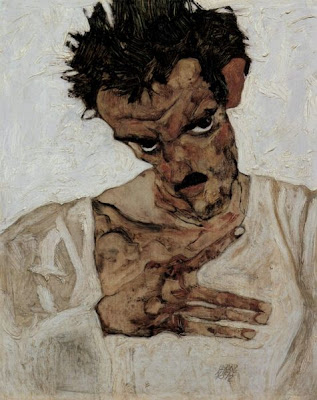 Of the many problems that I had with Raul Ruiz’s 2006 film Klimt (reviewed here), which starred John Malkovich as Gustav Klimt, perhaps the biggest obstacle to my enjoyment was the portrayal of Egon Schiele by Nikolai Kinski, son of the great German actor Klaus Kinski. Nikolai plays Schiele like Klimt’s Renfield, following the lead of the character from the original Bela Lugosi Dracula film. I’m going to give Nikolai the benefit of a doubt and assume that he was following the director’s wishes to channel Peter Lorre, since the rest of the film suffers from equally poor actors’ motivations. Born June 12, 1890, Schiele has always suffered from the stigma of being an outsider. Self-portraits such as the 1912 one above don’t help his case. Many people accept these self-portraits at face value. Nikolai Kinski almost seems to mimic the self-portraits, especially with the continual eccentric hand poses, as if that’s how Schiele went around all day. Because of his liberated views towards sexuality and intense artistic style, Schiele found himself an outcast in his day, accepted by only a handful of kindred spirits such as Klimt. But even today, almost a century after Schiele’s death, he remains an outcast in the art world, an oddity of such remarkable power that we almost can’t seem to look at him directly.

Schiele was an oddball, don’t get me wrong. The drawing of Gerti Schiele in a Plaid Gown (above, from 1909) is remarkably beautiful, but when you learn that Gerti was Schiele’s teenage sister, it’s hard not to get a creepy feeling. Perhaps I’m revealing my own prudishness, but Schiele pushed the sexual envelope well into the danger zone, landing himself in jail on one occasion after watching a judge burn his artwork right there in the courtroom. The violence Schiele does to the human body in his depiction of it reminds me of how Matthias Grünewald tortured the body of Christ in his Isenheim Altarpiece. Grunewald served as a Germanic artistic hero for many German and Austrian artists at the beginning of the twentieth century—a “modern” artist painting five hundred years before them. Like his contemporaries, the Expressionists, Schiele enacts upon the human form the same violence he sees besetting humanity as part of the modern condition. Yet, Schiele resists painting pure angst. The plaid gown barely covering Gerti’s lower half is beautiful in design and execution. Schiele saw past the angst and recognized the beauty of life. It was this vision that allowed him to see past conventional mores and depict the beauty in body and soul of his young sister. 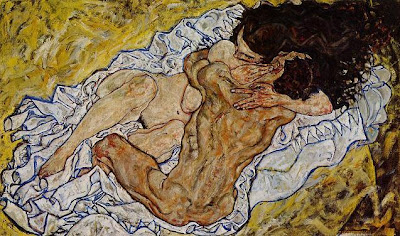 Who knows what direction Schiele would have gone had not the 1918 Spanish flu pandemic took his life at 28 years of age just days after claiming his wife Edith’s life. Living with Edith brought love and stability to Schiele’s life for perhaps the first time, despite the call of World War I. Edith gave Egon someone and something to return to. Schiele’s Embrace (above, from 1917) epitomizes the romanticism of this final stage of his career. To achieve a bird’s eye view in this work and others, Schiele sometimes mounted a ladder when sketching from live models. In Embrace, it is as if heaven itself looked down upon the lovers and gave its blessing. The sheets upon which they lay radiate out like a sun. The folds crackle with the energy of the couple’s passion. Many people read disease or death in how Schiele portrays the human body, but I see a plastic type of electricity flowing through the limbs. Arms and legs become conduits for power they can’t contain. When Edith died, it was as if life had pulled the plug on Schiele. He lost all will to fight on without her. For the three days he waited for death to reunite him with his love, Schiele sketched Edith from memory, as if he could resurrect her through art itself.

Schiele was great but I don't think he influenced anyone.

Poor bugger didn't have much of a life, did he? His father dead from VD when Egon was young. His mother being left without any income. Taken in by a reluctant guardian.

Schiele was said to be exploring the human form and sexuality. I don't mind his strong emphasis on the contour line and vibrant colours; and he was talented. But the long fingers, scrawny body and filthy hair are confronting.

Was he showing the horrible impact of living in a modern, industrial society? Who knows. But who was he planning on selling his confronting works to? Even expressionist artists had to sell their art to live.