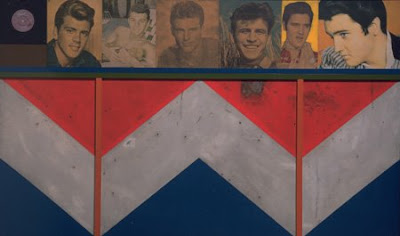 Mike Myers’ Austin Powers character spoofs the days of “Swinging London,” when outrageous behavior was the norm, but his outrageousness isn’t far from the real deal. In the middle of that swinging time was one of the most intriguing and fun artists of the twentieth century—Peter Blake. Born June 25, 1935, Blake was born just in time to soak up the teen-targeted popular culture of post-World War II Britain. Combining such “low brow” pop with “high brow” fine art technique and history, Blake created such works as Got a Girl (above, from 1960-1961). The faces of teen idols such as Elvis Presley and Ricky Nelson appear in a band across the top above a series of red, white, and blue chevrons that recall the work of Blake’s American contemporary Kenneth Noland. Just as America imported to England young hunks through movies and music, it imported the latest trends in abstract art, such as Noland’s pieces. Blake binds the two imports together and creates a pastiche of cultures clashing. By putting Elvis et al. at the top and Noland on the bottom, Blake flips the idea of “high” versus “low” on its head. Blake would take this pastiche style to its greatest extreme in his design for for the Beatles' album Sgt. Pepper's Lonely Hearts Club Band, which mixes history, literature, art, and music together in a dazzling, ground-breaking display. 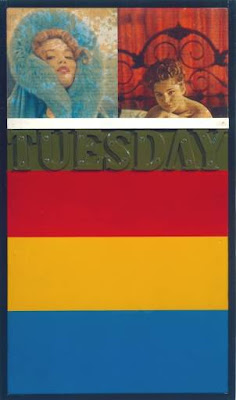 In addition to celebrating stars who “got the girl” in Got the Girl, Blake “got” his own girl in Tuesday (above, from 1961). Two photos of the actress and early 1960s teen sex symbol Tuesday Weld appear above the simple banner of “TUESDAY.” Blake plays off of the instant, one-name name recognition of pop culture and modern media in broadcasting the actress’ first name. Tuesday in many ways is the companion piece to the male stars of Got a Girl. To Blake’s male perspective, the young male stars blend together in their similar hairstyles and chiseled features. In contrast, Tuesday Weld strikes the male viewer as unique and special. If Blake had been a woman, the two compositions might have been reversed. Blake again places a Noland-esque abstract arrangement of color beneath the pop culture reference, but I wonder if Blake also alludes here to the celebrity-celebrating boxes of Joseph Cornell. Cornell, also a omnivorous consumer of all strata of culture, created semi-shrines to Lauren Bacall and other starlets of the 1940s. The boxlike arrangement of Blake’s Tuesday leads me to believe that he’s having a little fun in “borrowing” Cornell’s style while modifying it to his own taste and time.

Blake has become a revered figure in British art, but that doesn’t mean that the old lion’s been tamed. In The Meeting, or Have a Nice Day, Mr. Hockney (above, from 1981-1983), Blake plays off of Gustave Courbet’s 1854 The Meeting, or Bonjour Monsieur Courbet. Blake recasts artist David Hockney as Courbet and himself and Howard Hodgkin as the fawning patrons. Blake and Hodgkin seem out of place in their heavy clothes, but Hockney, the transplanted British artist in his new California habitat, wears informal, seasonal clothing. Behind the artists, Blake places all the stereotypical accessories of California living—palm trees, garish advertising, and beautiful blondes on roller skates. Blake is one of my favorite artists of the twentieth century for his incorrigible yen for mixing up the history of art with the pop culture of the time with equal respect for both worlds yet a sense of overall irreverence. You have to respect a man who grew up never growing up.
Posted by Bob at 12:01 AM

bob, would you write a special entry about your thoughts on michael jackson? i believe he was an artist of so many mediums...