One of the Boys 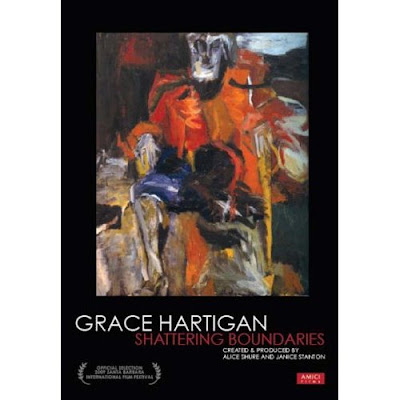 Is there any more macho American art movement than Abstract Expressionism? Just say the phrase and an image of hard-drinking and living artists such as Jackson Pollock and Willem de Kooning shouting opinions over liquor served at the Cedar Tavern comes to mind. What’s missing from that picture of men being men in the rough business of modern art is the very real presence of women, especially one woman—Grace Hartigan. In Grace Hartigan: Shattering Boundaries, an Amici Films documentary created and produced by Alice Shure and Janice Stanton, Grace Hartigan reclaims her place at the table with the boys club. Shure and Stanton recreate the smoky atmosphere of the time and recover the role Hartigan played in that movement. Both an artistic and a feminist statement, Grace Hartigan: Shattering Boundaries shows how one woman broke through the glass ceiling of the art world in the most masculine and hostile environments imaginable. 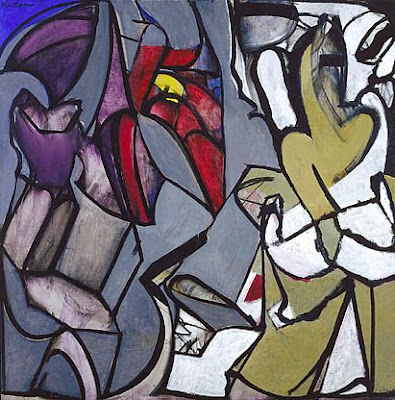 In many ways, the Cedar Tavern became Hartigan’s university. Hartigan had viewed one of Pollock’s earliest drip painting exhibitions and contacted Pollock to express her appreciation of his work, which was still poorly understood in the mainstream art world. Pollock invited Grace to visit him and Lee Krasner. (Pollock even baked an apple pie for the occasion.) Grace later met de Kooning through Pollock. de Kooning then invited Grace to join the Cedar Tavern circle, where she met poets such as Frank O’Hara and other artists such as Franz Kline. Kline and Hartigan eventually became lovers, but it was Grace’s relationship with O’Hara, who appealed to her Rilke-quoting side, that was deeper and more lasting. Although estranged for several years in the 1960s, Hartigan and O’Hara reunited in 1966, shortly before O’Hara’s tragic death. Hartigan painted Frank O'Hara (above, from 1966) soon after his death as a remembrance of their time together and the close ties of the Cedar Tavern days. Through Hartigan, the film emphasizes the supportiveness rather than the competitiveness of the Abstract Expressionist community. Their shared poverty due to no sales united them against the rest of the art world, even as figures such as John Cage and Dylan Thomas briefly wandered through their closeted world. Grace herself modeled nude for other artists at 95 cents an hour to stave off hunger. Thanks to Hartigan, we see the “softer” side of Abstract Expressionism that the macho men never revealed.

But, as the interview footage of Hartigan clearly demonstrates, she was no softie. Making her way in the boys’ club of art took great courage and sacrifices. To “pass” as a true, manly Abstract Expressionist, Grace even exhibited under the name George Hartigan in 1953 (above), something that she greatly regretted later. Through curators and art historians, the film examines with great insight the paradox of a woman painter trying to paint in a “masculine” style while remaining feminine and not losing the perspective of her gender. Hartigan’s Months and Moons, painted in 1950, connects the menstrual cycle with the lunar cycle and injects a female presence into the Abstract Expressionist school. Recounting this amazing balancing act, the filmmakers recover a lost side of the Abstract Expressionist movement while taking care not to reduce Hartigan to “just” a woman painter. From beginning to end, they stress how Hartigan never failed to be “a painter’s painter” who was the only woman to appear in such seminal 1950s exhibitions as Twelve Americans and American Painting. 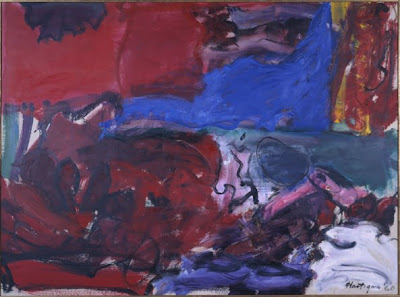 Why then, do we not know the name of Grace Hartigan as easily as that of Pollock or de Kooning? Certainly gender played a big role, but Hartigan’s choice to leave New York City after marrying and move to Maryland divorced her from the heart of the art world. Hartigan’s New York Rhapsody (above, from 1960, the year she left) displays the affection she had for her home, but the true love of Winston Price drew her to a new home, where she continued to paint and began to teach at the Maryland Institute College of Art. One commenter explains how this physical separation was compounded by irate New York dealers intent on ruining Hartigan’s reputation as revenge for her leaving. Free of the long shadows of the New York art scene, Grace continued to grow as an artist, copying Old Masters paintings in a self-administered art history education and later incorporating pop culture imagery into her work that won her the title “Mother of Pop Art,” despite the fact that she hated the label. 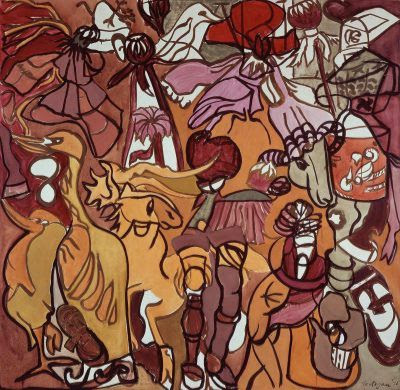 Perhaps the most enjoyable section of the film involves interviews with Hartigan’s students, who laugh as they recount her ominous silences while judging their work but always return to the theme of her equal parts toughness and fairness. Grace ran a gauntlet of alcoholism, her husband’s mental illness and eventual death, her own suicide attempt, and crippling hip problems and came out the other end with her Matisse-like painterly qualities intact in works such as Another Birthday (above, from 1971). The filmmakers portray Hartigan as such an indestructible force that it’s hard to believe that she passed away shortly after the film was first screened. “In painting I try to make some logic out of the world that has been given to me in chaos,” Hartigan once wrote. Even into the twenty-first century, Hartigan continued to look for sense in chaos, painting in response to the 9/11 attacks Angels over Manhattan, in which she imagines the angels of Wim Wenders’ film Wings of Desire saddened by the carnage. Grace Hartigan’s legacy has found two angels in Shure and Stanton, who have traced the (il)logic of Hartigan’s disappearance from art history and returned all the color and bravura of the artist’s person and work to center stage. Both a touching tribute and a feminist manifesto, Grace Hartigan: Shattering Boundaries breaks up the old lies and builds up a new truth.

[Many thanks to Microcinema for providing me with a review copy of Grace Hartigan: Shattering Boundaries.]
Posted by Bob at 12:01 AM

Thank you greatly for your wonderful review. Just to let you know, we now have a FACEBOOK PAGE for the film, “Grace Hartigan: Shattering Boundaries.” We want to build Grace Hartigan’s fan base, and we know with yor help we can work together to strengthen the love for her PAGE.

2. Suggest the page to your friends

Thanks in advance for your help and have a wonderful day!
Warmest Regards,
Microcinema International

I recall Grace Haritgan as a guest panel speaker at the Masonic Temple in Philadelphia, probably 1989. There were a umber of other panelists including Alex Katz. She struck me as an interesting blend of toughness, a certain sexiness even as an older woman, and as keenly intelligent. I look forward to this film. Thanks for bringing it to our attention

Great review. Based upon your comments, I look forward to reading and seeing the information. Thank you for sharing your opinion

Awesome! Thats was a great review. Very few people actuly can research and come up with such anecdotes. I can only thank you for the article. Lemme go through some of your other pieces. Thanks again!