The Man Without a Country 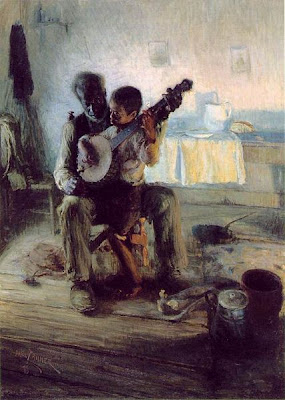 Although Henry Ossawa Tanner rose to prominence as the first great African-American artist, in the minds of many of his contemporaries, he always remained exactly that—an “African-American” artist and not just an artist. Born June 21, 1859, Tanner painted to escape from the prejudices of his time, but still found prejudice in the American art world. “I was extremely timid and to be made to feel that I was not wanted, although in a place where I had every right to be, even months afterwards caused me sometimes weeks of pain,” Tanner wrote in his autobiography. “Every time any one of these disagreeable incidents came into my mind, my heart sank, and I was anew tortured by the thought of what I had endured, almost as much as the incident itself.” Tanner’s very presence and talent challenged the mindset of his time. In The Banjo Lesson (above, from 1893), Tanner paints an older black man teaching music to a child in a warm and exceedingly human fashion. It lacks the burlesque of Thomas Eakins’ The Dancing Lesson, another scene of African-American culture being transmitted. As Alan C. Braddock points out in Thomas Eakins and the Cultures of Modernity (reviewed here), Eakins puts into paint the ideology that held African-American culture as less sophisticated than white culture. A photo of Abraham Lincoln reading with his son Tad in the upper left-hand corner of The Dancing Lesson illustrating the perceived culture gap. Even Eakins, Tanner’s teacher, fell prey to this prejudice. Perhaps thinking of the Lincolns in Eakins’ picture, Tanner paints the two generations of African-Americans in a way that recalls that picture of white father and son reading, a possibly defiant gesture for the quiet Tanner. Tanner painted The Banjo Lesson in 1893 while briefly revisiting America. Unhappy with racial conditions in the United States, Tanner moved to France in 1891 and lived there for the rest of his life. 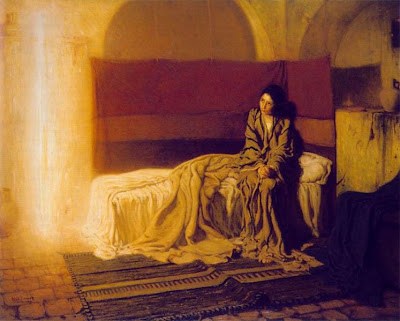 Although Tanner’s lauded as the first great African-American painter, few of his paintings deal with race. The Banjo Lesson and a few others are actually the exceptions in his career. Tanner’s The Annunciation (above, from 1898) is actually more representative of his body of work. Using his wife as a model for the Virgin Mary receiving the angel telling her that she’s going to give birth to the messiah, Tanner creates a scene of simplicity and realism that strikes at the heart of the humanity of the scene rather than plasters piety over it. I’ve looked at this painting many times in person at the PMA and always come away touched by the depth of feeling and faith it conveys. Depicting the angel as simply a brilliant light, Tanner resists the urge to bring the heavenly down to earth through illustration. It was this great faith that allowed Tanner to go on despite racial prejudice. France must have seemed like a great oasis to him. When artists of the Harlem Renaissance such as William H. Johnson traveled to Paris in the 1920s in pursuit of a better racial climate and new art experiences, they sought out Tanner as a pioneer and a pattern for their own careers.

Tanner never returned to America. Sadly, it took many years for him to gain any recognition in his homeland. In 1996, President Bill Clinton and First Lady Hillary Clinton oversaw the purchase of Tanner’s Sand Dunes at Sunset, Atlantic City (above, from 1885) for the White House’s Green Room, making it the first artwork by an African-American artist to become part of the White House’s permanent collection. It was a fitting way of bringing Tanner “home,” in that rather than force the label of African-American artist on him with one of his images of black culture, the Clintons chose instead a landscape that could have been painted by anyone with great talent, regardless of skin color. Tanner had finally found the racially blind acceptance that he had looked for all along.