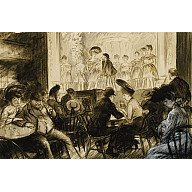 “We’ve come together because we’re so unlike,” wrote Robert Henri in a May 1907 press release for the Macbeth Galleries show in February 1908 that would forever link him and the other seven artists in that show as The Eight. Later, thanks to the socially conscious work of some of those artists, The Eight became known under the less-glamorous label of The Ashcan School. Certainly works such as William Glackens’ A Headache in Every Glass (above, 1903-1904) left a strong impression, creating new headaches for a group too diverse for any label beyond a simple number. For almost a century now, the label of Ashcan has been hard to rip away. In The Eight and American Modernisms, Elizabeth Kennedy of the Terra Foundation for American Art tries to pull The Eight from the ashes of art history and clean up not only their reputation but blow the dust off of the lasting effect those artists had on American Modern art in the years after the 1913 Armory Show that allegedly tolled the death knell for The Eight as an influential force for American art. If conventional art history etched a tombstone for The Eight, the years would read “1908-1913.” “This exaggeration of the rapid ascendancy and demise of The Eight’s contribution to a nascent American avant-garde obscures a far more complex tale,” Kennedy writes in her introductory essay, “for each artist experienced a successful professional journey that defies group labeling, with its implication of a single unifying ideology or a static artistic outlook.” The Eight and American Modernisms raises The Eight from the grave and confirms that reports of their early demise were greatly exaggerated. 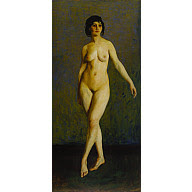 From the moment you look at the cover of The Eight and American Modernisms and behold Henri’s 1916 Betalo Nude, you know that this isn’t your father’s (or grandfather’s) idea of The Eight. The grime of gritty realism gives way to the symphony of tones and color in that nude, just one of the many nudes that The Eight painted during their heyday and long afterwards. As both artists and teachers, Henri and John Sloan were especially “dedicated to the representation of the human figure as the vehicle for portraying their expressive ideas,” writes Kennedy. Henri’s 1913 Figure in Motion (above), painted the same year that Marcel Duchamp’s Nude Descending a Staircase, No. 2 wowed crowds at The Armory Show, responds to European Modernism without slavishly following it. “Experimental painting of the nude model in the studio was one of the theoretical strategies that some of The Eight continued late into their careers,” Kennedy explains, but never at the expense of losing their own personal vision. “It is necessary to pierce the core, to get at the value of a movement and not be confused by its sensation exterior,” Henri said of his reaction to new art movements. It is this “dedication to individualism in art, writing, and teaching” on Henri’s part that “fostered American modernism” argues Sarah Vure in her essay on Henri. 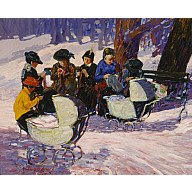 Kennedy and her cohorts do their best to individualize each of The Eight and allow them to stand alone rather than force them to stand together. Perhaps none of these individuals was so “individual” as George Luks. “Sometimes you wonder over his versatility,” a New York art critic wrote of Luks in 1920, “a character actor, a low comedian, even song-and-dance man, a poet, a profound sympathizer with human misery, and a human orchestra.” In her essay on Luks, Judith Hansen O’Toole links Luks with Henri, calling both “passionate humanitarians seeking to forge a new artistic expression that was truly American and of their own time.” Luks’ Knitting for the Soldiers: High Bridge Park (above, c. 1918) brings the World War I home front home while portraying “realism” with color and vibrant style. Such paintings by Luks, who resisted the “social realist” label for himself, laid the groundwork for the social commentators of the 1920s and 1930s. Luks painted portraits of coal miners not only because they struck him as interesting subjects, but because they reminded him of the miners he’d known during his childhood in Pennsylvania coal country. “Making art was their life,” Kennedy writes of The Eight in her introduction, “not merely the practice of their profession.” Luks lived and painted with passion and was found dead at 67 in the doorway of a speakeasy in 1933 after losing in a brawl. Each of the essayists in The Eight and American Modernisms beautifully breathes life into their subject and integrates living and painting to the point that they become one again. 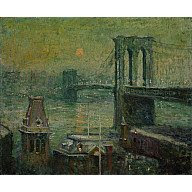 
After reading these essays, you come away with a sense of The Eight as a truly pivotal group in the trajectory of American art history—the link that connects the past with the future. Trained by American Impressionists John Twachtman and J. Alden Weir, Ernest Lawson brought Impressionism to the big city. Essayist Jochan Wierich sees Lawson as the heir to the American Romantic tradition of the Hudson River School as much as an heir of European Impressionists. “Lawson demonstrated to his contemporaries how the art of landscape could survive and refashion itself as an expression of modern life,” Wierich writes, in works such as Brooklyn Bridge (above, from 1917-1920), which “combine pastoral tradition with urban reality.” The grit and grime of the Ashcan School label disappears in such transcendent and transformative works. Lawson builds a bridge between Thomas Cole and Edward Hopper that continues a tradition without chaining any one artist to a single style. Both conservator and innovator of the American tradition in art, Lawson and the rest of The Eight retained the elusively definable “Americanism” of art without closing eyes to possibilities from abroad. 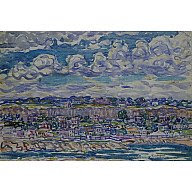 In her essay specifically on Maurice Prendergast, Kennedy uses the greatest exception to ideas of The Eight to “prove the rule” of their uncategorizable diversity. Prendergast stood as the “only member of The Eight whose reputation grew more favorable in [The Armory Show’s] immediate aftermath,” Kennedy explains. Suddenly, oddball works such as St. Malo (above, from after 1907) seemed not so odd in the context of Post-Impressionism. Sadly, it took the affirmation of artists from overseas to free viewers to accept Prendergast’s unusual style. The Eight and American Modernisms looks to free viewers to accept these artists as individuals and then, again, as a group of artists united in the same goal of furthering American art and contributing to American society in their own diverging ways. “The Eight’s simultaneous recognition of non-representational art as a valid expression of contemporary art styles while refusing to embrace the authority of abstract art as the only ‘true’ vehicle for modernity encouraged other American artists to insist on the integrity of their own creative ideas,” Kennedy concludes. In other words, The Eight accepted other artists on their own terms and asked for nothing less for themselves. The failure of that courtesy costs us a clear picture of how vital these artists and their philosophy was to the beginnings of modern art in America. The Eight and American Modernisms rescues The Eight from the ignoble dustbin of art history and washes away the smear of Ashcan School for good.


[Many thanks to The University of Chicago Press for providing me with a review copy of The Eight and American Modernisms and to the Terra Foundation for American Art for the images from the catalogue above.]
Posted by Bob at 12:01 AM

thanks
Hels
Art and Architecture, mainly