As the Philadelphia Museum of Art’s exhibition Cezanne and Beyond proved earlier this year, Paul Cezanne sired many artistic “sons,” including equally influential artists such as Henri Matisse and Pablo Picasso. Cezanne’s family tree spreads far and wide and includes many “daughters,” as well, including the Portuguese artist Maria Elena Vieira da Silva. Born June 13, 1908, Vieira da Silva began her studies in Lisbon, Portugal, but by her teens was already in Paris studying with the likes of Fernand Leger, who had his own “Daddy” issues with Cezanne to deal with. Maria soon took the lessons of Cezanne and extended them in her own way, as so many followers of Cezanne have. The atomization of reality that Cezanne approached in his depiction of mountains and still lives becomes almost total in works such as Vieira da Silva’s Dance (above, from 1938). Her approach falls between several different movements while brushing up against them. The approach is Cubist without rendering the subject totally unrecognizable. Cezanne-like colors remain, but the geometry of the shapes predominates over the subject matter itself. Especially in works such as Dance, there’s a sense of movement, yet that movement comes from a geometrical pattern rather than from the near-biological shapes of Futurism, which animated Cubism, which came out of Cezanne. Vieira da Silva mothers this incestuous blending of styles into a style uniquely her own. 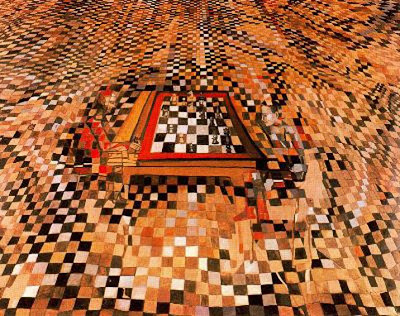 The idea of Viera da Silva’s art as a kind of code to be decoded comes across most clearly in The Chess Game (above, from 1943). The checkered pattern of the chessboard extends beyond the table not only to the players themselves but also to the very landscape itself. All of reality becomes a game to be played and comprehended by the intellect and the imagination in tandem. Vieira da Silva would have loved The Matrix films. Surrounded by all the different theories of modern art swirling around Europe in the first half of the twentieth century (half of which Picasso created or improved), Vieira da Silva rose above the individual codes and got metaphysical. Maria’s meta-code of pure plane geometry may be the purest homage to Cezanne himself, who was always wary of theorizing and preferred to view his personal vision as exactly that, a personal vision of the world captured in art. Vieira da Silva resists all these influences without ignoring them in holding onto her own creative personality. She painted The Chess Game not only while these art movements squared off against each other, but also while nations waged the “great game” of World War II for nothing less than world control. 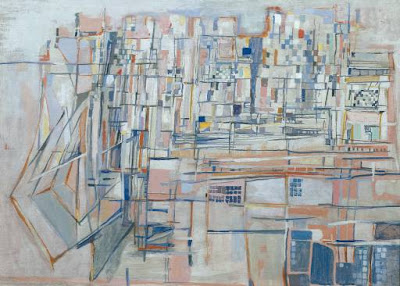 Vieira da Silva spent the war years back in Lisbon, but she returned to her second home of Paris in 1947, living there for the rest of her days. Her Paris (above, from 1951) renders her beloved adopted city as another kind of code. The city itself remained fractured at the time, still rebuilding after the war. The colored windows of the buildings resemble the checkerboard world of The Chess Game. Without the title, it would be impossible to guess what Vieira da Silva is painting here. With that clue, however, our minds search the lines for the edges of buildings and the streets lined with cafes and homes. Vieira da Silva invites us to crack the code she sets up and discover the same Paris she discovered over the course of her life. In 1956, Vieira da Silva became a French citizen. In 1966, the French government awarded her the Grand Prix National des Arts, making her the first female recipient. In 1979, France named her a Chevalier of the Legion of Honor. Step by step, over the years, Vieira da Silva drew herself deeper into the maze of French culture and art, becoming one, if not “The One,” with the puzzle that is Paris.
Posted by Bob at 12:01 AM

I liked it, you can find more modern art from spacify.

Thanks for blogging about the lesser known women artists. It is so interesting to see their take on the different theories of art.

More portuguese art in your wonderful blog, my friend!

Note: We are not extreme right... just loving our culture and promoting Portuguese language all over the world.

thanks for sharing this site. there are various kinds of ebooks available from here