The Fast and the Furious


In his prime, friends and fellow painters called Jacopo Comin, better known as Tintoretto (or the “little dyer” after his father’s occupation as a dyer), Jacopo Robusti (“the robust one”) or Il Furioso for his seemingly endless store of furious energy. Until his death on May 31, 1594, Tintoretto painted scenes of ancient gods and the Christian God like he had made a pact with the devil instead. Jacopo’s father reportedly took Tintoretto to study under Titian, but the Old Master never took Jacopo as a student, either, as the legend goes, out of fear of being outdone by a student or, more likely, out of fear of unfairly influencing a unique talent. In Venus, Mars, and Vulcan (above, from 1551), Tintoretto paints a classical tale in Titian-like style but with his own sense of humor mixed in. The cuckolded Vulcan rushes into room to confront Venus as Mars hides under the table and Cupid feigns both sleep and innocence. Tintoretto paints the very moment of tension before Venus’ dog barks at Mars in his hiding place and the fur really begins to fly. It’s truly amazing just how much energy Tintoretto could inject into any scene, even one as well-known and over-painted as this classic love triangle. With humor and humanity, Tintoretto speeds up the film and gets the action started.

Above his studio door, Tintoretto inscribed “Michelangelo's design and Titian's color.” Titian certainly knew Michelangelo’s 1541 fresco of The Last Judgment and didn’t flinch from the idea of drawing a comparison, just as Michelangelo himself had strove to do Giotto one better. Tintoretto’s The Last Judgment (above, from 1560-1562) stands more than 47 feet high; Michelangelo’s version comes in at a hair under 45 feet. In that slightly larger space, Tintoretto inserts more souls per square foot than his predecessor. Also, Tintoretto depicts the figures greatly foreshortened. Standing at the base of the painting you get the feeling that they are about to fall down on you, as if you had just opened a giant closet door and the entire apocalypse was crammed inside. Giotto’s Last Judgment is pure, coherent order; Michelangelo’s version is complexity masquerading as chaos; but Tintoretto’s take is chaos covering more chaos—perhaps the best rendition of how the final reckoning will actually look to human eyes, if that day should ever come. Perhaps there’s a method to the madness of Tintoretto’s Last Judgment, but the teasing out of the rationale is beyond me. Like so many people trying to keep up with Tintoretto, I just don’t have the energy. 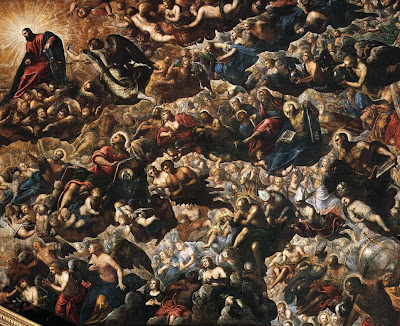 When fires destroyed the decorations of the legislative meeting rooms of the Doge’s Palace, Tintoretto created his largest and last blockbuster, titled with deceptive simplicity, Paradise (detail above, from 1587-1590; see the whole thing here). At 74 feet wide and 30 feet tall, Paradise may be the largest canvas painting ever made. With the help of his son Domenico, the 70-year-old but still spry Tintoretto painted the work and installed it in the room. In the center, Jesus and the Virgin Mary serve as the still center around which hundreds and hundreds of saints radiate out. With Paradise, Tintoretto finishes the job he began with his Last Judgment, showing you the final results, as it were. As with Tintoretto’s Last Judgment, Tintoretto’s Paradise defies easy summation and bursts beyond our ken. One can only wonder what went through the minds of Italian politicians over the years as they deliberated with Tintoretto’s masses teeming on the wall and passing judgment on them as they pass judgment on others. Sadly, Tintoretto’s career is colored by his big thinking and painting. You simply can’t wrap your mind around these works. I suspect that Tintoretto’s point isn’t to stop and think as much as to look and learn, and always, always keep moving.