It is a common motif of Catholic art that the divine intervenes in the mundane from time to time. Baptized June 2, 1565, Francisco Ribalta began painting in the Mannerist style common in Spain at that time. Ribalta’s The Vision of Father Simón (above, from 1612) shows Francisco Gerónimo Simón, a Valencian priest famous for his faith meeting Christ carrying his cross to Calvary. Father Simon claimed that he frequently had visions of the Savior struggling beneath his burden along a street upon which condemned criminals walked to their execution. Upon Father Simon’s death in 1612, his fellow priests commissioned Ribalta to paint this vision, which seems so artificial to us today, in line with the Mannerist style. The buildings in the background seem as two-dimensional as a stage backdrop. Father Simon’s kneeling pose appears more stilted than passionate. If you did not know the story of the visions you might even guess that the good Father’s praying at the feet of a statue. The lack of humanity in this painting de-animates the actors, robbing them of any connection with all but the most fervent believer. 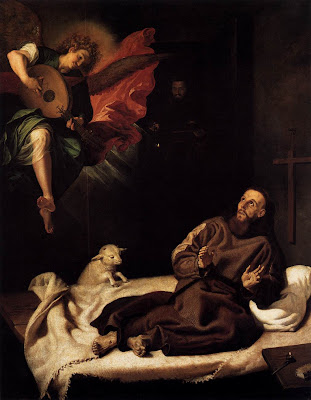 By 1620, Ribalta’s style had loosened up considerably. The fact that his subject in the painting above, St. Francis of Assisi, may be the most human of all saints may have helped. In St. Francis Comforted by an Angel (above, from 1620), Ribalta illustrates a story in which an angel came to St. Francis’ sickbed to play songs from Francis’ youth. If he wasn’t floating in mid air, you might mistake the lute-toting angel for a human musician. The expression on St. Francis’ face indicates surprise but not fear, aptly capturing the mindset of a true believer confronted with a comforting vision. Even the lamb poking its nose onto the bedsheets, which are realistically rumpled, seems convincingly real. Whereas Mannerism stressed the unreality of religious encounters, Ribalta’s naturalism in this case emphasizes the reality of a relationship with a God who will comfort us if we allow Him entry. In The Vision of Father Simón, Ribalta makes a half-hearted attempt at rendering the folds of Christ’s cloak, but in St. Francis Comforted by an Angel, Ribalta renders textures and surfaces with an unsparing level of detail, as if God Himself were in the details, as the saying goes. 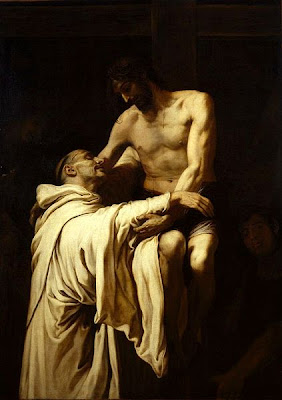 Around 1620 Ribalta encountered, either firsthand or secondhand, the works of Caravaggio. St. Francis Comforted by an Angel hints at the dramatic use of dark and light in a Caravaggisti fashion, but Ribalta truly gets Caravaggioesque in his masterpiece, Deposed Christ Embracing St. Bernard Clairvaux (above, from 1626). The scene itself is an unreal vision of Christ loosening himself from the cross long enough to embrace the founder of the Cistercian order of monks. Yet, the two figures seem as realistic as two friends displaying their mutual affection. The contrast between the enrobed Bernard, whose cloak folds beautifully around his enveloped body, and Jesus, whose naked limbs almost throb with life through the rendering of muscle, bone, and sinew, is incredible. Ask anyone unfamiliar with the work and they’d guess Caravaggio in a heartbeat. Perhaps even more touching is how the clothed monk leans against the vulnerably unclothed savior rather than the other way around. Whereas The Vision of Father Simón puts the two figures almost on equal footing in their encounter, this painting shows the proper hierarchy, with weak flesh seeking support from divine spirit. Upon Ribalta’s death, a contemporary critic wrote, “[H]e gave his soul to God and was so venerated that he was held almost as a saint; he sought no advantages in this life." The divine had intervened in Ribalta’s life just as much as Caravaggio’s technique had, helping Ribalta develop a personal style that conveyed the coexistence of the darkness of human weakness and the light of divine love.