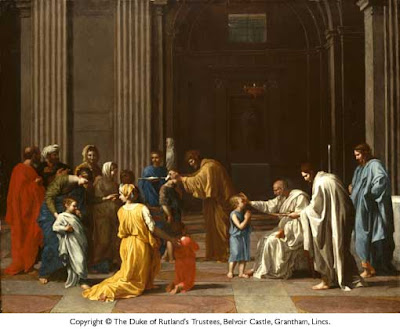 In the late 1630s, Cassiano del Pozzo commissioned Nicolas Poussin to paint seven works based on the Baptism, Penance, Holy Eucharist, Confirmation, Matrimony, Holy Orders, and Anointing of the Sick. Born June 15, 1594, Poussin brought his characteristic intellectual approach to these paintings, looking for the perfect historical and theological setting upon which to stage each of these works. The idea of somehow abstractly depicting these everyday miracles never would have occurred to Poussin. Today, only six of the original paintings still exist, with Penance lost in a fire in the early nineteenth century. In Confirmation (above, from 1637-1640), one of the remaining del Pozzo commissions, Poussin selects the church of Sant'Atanasio dei Greci in Rome, which was built for Rome’s Byzantine citizens after the patriarch of Constantinople permitted them to receive the Catholic-style sacraments. As a young boy is anointed, another boy holds the pascal candle used on Holy Saturday, the evening before Easter, when the Catholic church receives new souls into its body on Earth. Poussin picks the exact time and place at which the preeminence of the Catholic Church is confirmed by its acceptance by another culture. The boy, the sacrament itself, and the very church are confirmed simultaneously in a mystical triple play. 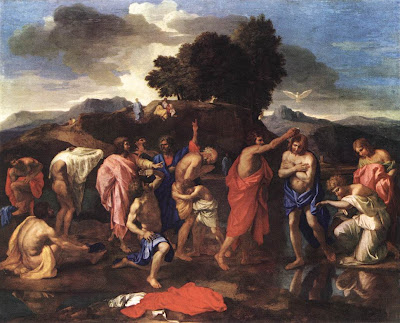 The main knock against Poussin, if you can call it that, is the cool, almost cold logic of his works. You don’t get any sense of religious fervor from his Confirmation. The painting casts light but no heat. It’s as if Mr. Spock were to pick up a brush. But like Spock, Poussin does allow his “human” side to show at times. Although most of the other del Pozzi sacramental paintings share Confirmation’s cool, Poussin’s Baptism (above, from 1642) turns up the heat a bit. The classic Poussin landscape, all full of convincing depth and weight, supports rather than overwhelms the figures, as it can in other works by Poussin. Poussin painted Baptism among the last of the del Pozzi group but works with a freer, more imaginative hand than in works such as Confirmation. Instead of the meticulous detail and pointed allusions of Confirmation, Poussin uses the moment at which John the Baptist pours water over the head of Jesus. Rather than dazzle with a construction of his own making, Poussin uses the time-honored theme of Jesus’ baptism to show off his painter’s heart rather than his painter’s brain. Poussin sets the stars of the show off center, to the right. Instead, he places others just baptized or waiting their turn, just as Christians even today await their turn to have their sins washed away. Through that move, Poussin connects the past with the present and finds the true meaning of the sacrament. 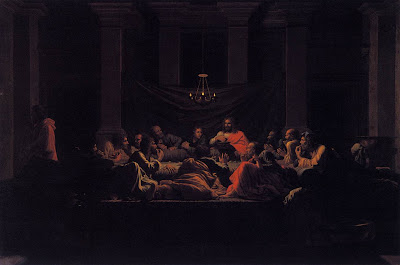 In 1644, Paul Fréart de Chantelou commissioned Poussin to paint a series on the seven sacraments for him. Rather than copy the first set for del Pozzi, Poussin followed the cue of the Baptism scene he painted last. Of this second set, Poussin’s Eucharist (above, from 1647) is the most moving. The darkness of the scene is positively Caravaggioesque. The disciples gather around Christ and the dim light in the center and eat the bread just offered. Off to the left, Judas makes his escape to set the betrayal in motion. da Vinci’s Last Supper may be the iconic standard of this theme, but Poussin’s take breathes and lives in a way that da Vinci’s two-dimensional depiction does not. Poussin makes the darkness of the room tangible as we visually probe deeper to discern the faces and expressions of the disciples. The huddled nature of the figures arranges them in a much more casual and realistic way than da Vinci’s “group photo” look. Again, Jesus is slightly off-center, but not as off-center as in the Baptism painting. The very nature of the Eucharist demands that Jesus remain the focus, but Poussin allows the disciples to share the limelight here, thus making them stand in for Christians today who reenact that Last Supper in the sacrament of the Eucharist. Perhaps Poussin needed to work out the thoughts teeming in his brain before he could engage the sacraments fully with his heart.
Posted by Bob at 12:01 AM