Love Is the Answer

When I started this blog, the very first image I used was Paul Gauguin’s Where Do We Come From? What Are We? Where Are We Going? (above, from 1897-1898). I wanted to write about how art asks questions and helps us look for, if not find, the answers. Born June 7, 1848, Gauguin spent five years of his adolescence studying at a Catholic seminary, studying from the catechism such fundamental questions, dutifully answered in the following text. I still have a copy of the Baltimore Catechism of my early education, complete with hair-raising illustrations aspiring to visualize the most abstract concepts. By the time Gauguin painted this work, life had beaten him down. The paradise he sought in the Tahitian islands and their inhabitants no longer soothed his anxieties. In fact, Gauguin threatened to commit suicide after finishing this work. He claimed that, read right to left, the three groups of people illustrated the three questions posed. The blue idol on the left, near the final “Where Are We Going?” group, symbolized “the Beyond,” according to Gauguin. Gauguin is best known as a painter, but his sculptures, modeled after African and Pacific styles, tell much about him as well.
Even before he left France and civilization behind for the shores of Tahiti in 1891, Gauguin had already left in his imagination. At the 1889 Universal Exposition in Paris, Gauguin viewed “primitive” artworks of Africa and the island cultures. The simplicity and primal energy of these works electrified Gauguin’s imagination. Claustrophobic in the confines of civilization, Gauguin felt unbound in the company of such works. In Be in Love, You Will Be Happy (above, from 1889), Gauguin pictures himself on the island already, face to face with the Tahitian beauties. Disturbingly, Gauguin seems almost monstrous in this image, forcefully grasping the arm of the native woman resisting his advances. “Be in love, you will be happy” in this image is a command, not a romantic sentiment. When Gauguin physically arrived in Tahiti, according to most accounts, he charmed the ladies with small bribes and personal charm. The violence of this image may echo the colonialist approach to Tahitian and all “primitive” culture taken by Europeans of the time. Expositions such as the one Gauguin visited usually presented European culture as the apex of civilization, with “lesser” cultures being less evolved forms in an unfair bastardization of Darwin. 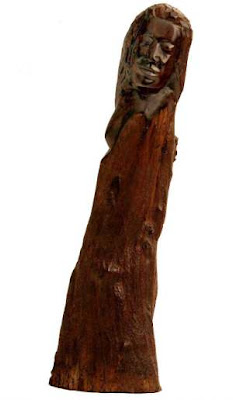 Face to face with the beautiful (and sexually available) women of Tahiti, Gauguin literally idolized them in idol-like works such as his Figure Tahitienne (above, from 1892-1893). Beset by illness and financial woes, Gauguin created an idealized vision of the simplicity and purity of these island ladies. The expression on this figure’s face is placid, with just a hint of melancholy, perhaps projected there by Gauguin. With just a few details—face, hair, breast, and hand—Gauguin presents the whole woman, or at least his view of the perfect, un-civilized woman free of pretentions and inhibitions. Because of the sexual nature of Gauguin’s work, it’s easy to view these depictions of fantasy women negatively in a Playboy centerfold kind of way. However, strip away the negative connotations civilization surrounds that sexual context with for a moment, and you can see these figures as a new type of Madonna figure. On an island altar, Gauguin beseeches such figures to come to his aid. 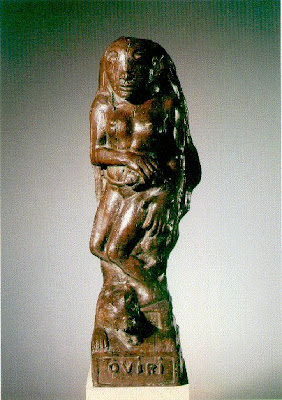 Of course, once you’ve placed anything or anyone on a pedestal, you’re asking for a hard fall. In Oviri (Tahitian for “wild”) (above, from 1895), Gauguin carves a new idol but not a placid one. The wildness of this figure resembles the destructive wildness of the Hindu goddess Kali. The sexuality oozing from this figure promises destruction rather than salvation. The creative sexual energy that Gauguin hoped to tap into slipped out of his grasp and threatened to destroy him. Where Do We Come From? What Are We? Where Are We Going? is Gauguin’s attempt to reign all of that energy and all of his doubts back into his control. Gauguin’s thoughts of suicide become understandable when confronted with Oviri’s visual representation of the demons in his head. The paradise Gauguin believed he had found proved false in the end, but he never lost faith in his quest itself. To the end, love, however elusive, remained the answer.

Incredibly informative, cerebral and fun to read! I love this blog so much!!