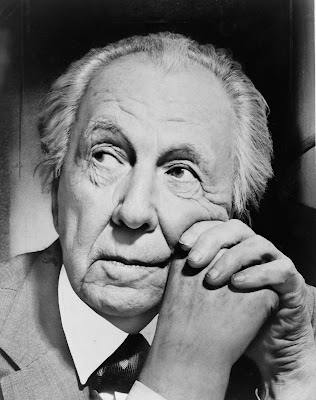 I had the pleasure of staying earlier this year at the Arizona Biltmore Hotel, which bears many of the marks of Frank Lloyd Wright’s style, although his involvement in the project is questioned. What can’t be questioned is the fact that Wright (shown above in 1954) left an indelible mark on American architecture during his long career. To commemorate the fiftieth anniversary of Wright’s death and the opening of the Solomon R. Guggenheim Museum, Rizzoli, The Frank Lloyd Wright Foundation, and the Guggenheim have joined forces to publish three impressive books that celebrate the work of the master from different angles. Individually, these works shed light on Wright sometimes in small details, but, like the man himself, when assembled together, these works stack up into giant ideas and, perhaps, unrealizable ambitions. Anyone who knows the man and his work will find themselves captivated once again. Those who do not know Wright will discover the stuff of dreams—specifically, the American dream. 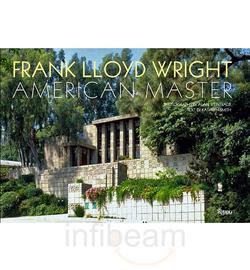 In Frank Lloyd Wright: American Master, 350 color photos taken by Alan Weintraub featuring over 100 discrete works by Wright provide a sometimes dizzying display of the architect’s diversity and longevity. For $30 US, this collection offers a remarkably comprehensive collection of images of all of Wright’s major projects at a reasonable price. Wright built over 500 buildings, so a work covering all of them would cost, and perhaps weight, as much as a small house. The photos dwarf Kathryn Smith’s introductory text to the sections, but Smith makes up in quality what Weintraub covers in quantity. “Like Picasso, Einstein, or Freud,” Smith writes, Wright “was a rare individual who permanently altered the fundamental way we perceive our world.” Smith deals in superlatives, but the terms seem apt when supported by the photos. Like most great artists, Wright remains an enigma surrounded by more questions than answers as we learn more about him. “In the end,” Smith concludes, “these very paradoxes and contradictions that make him so difficult to compartmentalize are what give him such lasting appeal.” Looking at Weintraub’s photos of the Arizona Biltmore Hotel, I found myself transported back to the place itself and fondly recalled the feeling of working and sleeping within a piece of art itself. Through this economical volume, people who have never had the chance at that feeling can at least press their noses against the windows. 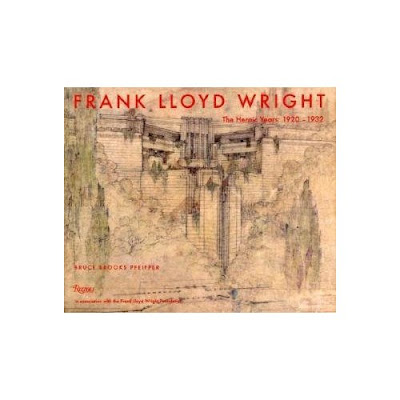 In Frank Lloyd Wright, The Heroic Years: 1920-1932, Bruce Brooks Pfieffer concentrates on the lean years that tested Wright’s mettle and, rather than ruined him, forged him into an even greater artist and visionary. “My husband seemed to thrive on hardships,” Olgivanna, Wright’s third wife, recalled of that time. In that tumultuous decade, in addition to the “Great Depression” that plagued all of American society, Wright personally dealt with the death of his adoring mother in 1923, the death of his mentor Louis Sullivan in 1924, the (second) destruction of his Taliesin studio-home by fire in 1925, continued troubles with his second wife Miriam Noel until her death in 1930, and his descent into debt while trying to rebuild Taliesin. After the loss of Taliesin in 1926, Wright works with permanent home or studio for the rest of these “heroic” years. Despite these setbacks, Wright persevered. “He indeed seemed destined to be an architect who was not accepted by the world around him,” Pfieffer writes of Wright. “Yet that never defeated him, and he continued with ever-present optimism to continue creating buildings that rank among the most important works realized in his long career.” The greatest accomplishment of this period must be Wright’s Imperial Hotel in Tokyo, Japan. Completed in 1923, The Imperial Hotel that same year withstood the magnitude 7.9 Great Kantō earthquake that leveled the rest of Tokyo. Like the Imperial Hotel, Wright withstood each earth-shattering event and seemingly stood even taller in the aftermath. Pfieffer is clearly a fan, but you can’t help but join along when trial piles on trial. In 1930, after years of darkness and no hint of a bright future ahead, Wright said in a lecture, “Keep your ideal of honesty so high that you will never quite be able to reach it.” That unreachable aspect of Wright’s work comes across in the many incredible illustrations and plans that fill Pfieffer’s book, many of which are for unrealized projects. A selection of Weintraub’s photography showing realized projects of this period appears in The Heroic Years, but it is the buildings that were never built and remain pure thought and imagination that appeal even more in their sheer potential. Pfieffer picks 1932 as the end of Wright’s trial by fire because that is the year Wright opened the Taliesin Fellowship, a school for architects in which Wright hoped to spread his gospel of democratic architecture to the next generation. In 1932, the private Wright became the public Wright for the rest of his days, thus committing himself to changing the world one design at a time. 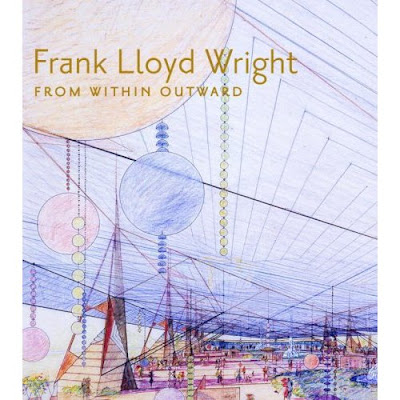 Frank Lloyd Wright: From Within Outward picks up where The Heroic Years leaves off. The catalogue to the Guggenheim exhibition of the same name, From Within Outward concentrates on the public Wright—the builder of houses of worship such as Beth Sholom Synagogue, museums such as the Guggenheim, community centers such as the Marin County Civic Center, and suburban planning projects such as the uber-democratic, near-utopian Broadacre City. “Wright’s goal was nothing less than the reinvention of the built environment in order to promote our development as individuals, enhance and enrich the social rituals and patterns of our lives, and encourage meaningful reengagement with the world around us,” Margo Stipe explains in her introductory essay, “all of which are particularly timely and worthy of our attention today.” From Within Outward presents not a retrospective of a dead figure but rather the still-living spirit of a visionary whose vision is still applicable today. Stipe points out that the then 90-year-old Wright told a television interviewer in 1957 that he’d change the country if he could only live another fifteen years. Wright had only two more years of life in him, but From Within Outward resurrects the man and his plans five decades later with more vibrantly alive illustrations of both plans completed and never begun. In his essay on Wright’s sacred spaces, Joseph M. Siry writes, “Wright created a space for the whole community to see and know itself.” Through grand designs for what America could be, Wright, that great romantic dreamer of architecture, holds up a mirror to modern America “to see and know itself” and, more importantly, wonder what it could be. 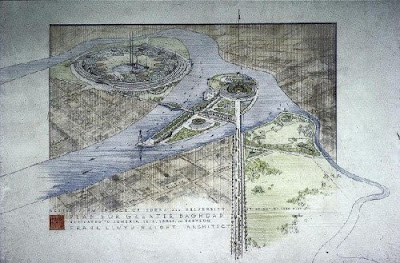 Of all the unrealized plans in these books on Wright, those for Greater Baghdad (above, from 1957-1958) captured my imagination the most. “Wright’s culminating work in Baghdad elaborated his ideal of the spirit (that sense of interior he traced to the philosophy of Lao-Tzu) in space (a continuous flow), liberating human imagination, action, and interaction,” writes Mina Marefat in her essay on the Baghdad plans in From Within Outward. Within the planned opera house, Wright placed a statue of Aladdin. “We will find all the magic of ancient times magnified,” Wright explained of this touch. “Aladdin’s lamp was a symbol merely for Imagination. Let us take this lamp inside, in the Architect’s world.” Reading these three books on Wright injects the magic of Wright into our hearts and imaginations, allowing us to reengage with the world around us and, ultimately, freeing us from the dreary offices and apartment buildings of our lives to find new spaces that spark our minds and feed our souls. Wright’s magical dream for Baghdad never became a reality, but the true message of Wright’s life is that sometimes dreams can be more real than the deadening reality around us.