Blinded Me With Science 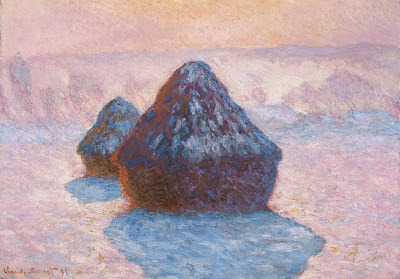 Sweet is the lore which Nature brings;
Our meddling intellect
Mis-shapes the beauteous forms of things:—
We murder to dissect.

Enough of Science and of Art;
Close up those barren leaves;
Come forth, and bring with you a heart
That watches and receives.

—From “The Tables Turned” by William Wordsworth

Science and art have always warily stood apart while keeping close. As Wordsworth lamented, we often “murder to dissect” when we take a living, creative act and place it under the microscopic eye of hard, cold science. Heavenly magic crashes to the level of earthbound fact. In Painting Light: The Hidden Techniques of the Impressionists, Iris Schaefer, Katja Lewerentz, and Caroline von Saint-Georgecall upon science not to bury Impressionism under analysis but to use science to foster greater understanding and appreciation of it. Schaefer et al paint the Impressionists themselves as a band of intuitive scientists. “Looking back,” they write, “how Monet and many of his contemporaries succeeded in realizing scientific and above all optical laws so comprehensively in their paintings, despite the fact that in the 19th century these laws were only just being scientifically recognized and researched, is oe of the most exciting issues.” When Monet paints Haystacks, Hoarfrost Effect (above, from 1891), one of his many studies of haystacks under different weather and light conditions, he acts like a scientist gathering data in pursuit of a theory. Similarly, van Gogh kept a box full of colored yarn that he used to study color contrasts before realizing them in paint. We associate Impressionism with feeling and emotion, yet the artists themselves often acted in a consciously premeditated way when painting. Rather than murder to dissect, Painting Light dissects to give these works new life. 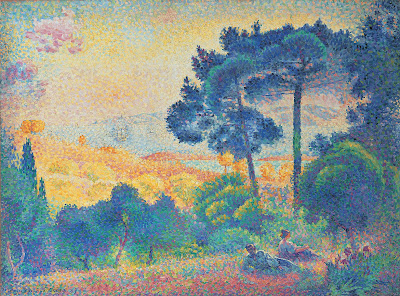 Schaefer et al see Monet et al anticipating scientific findings in the field of optics and color perception. Many of the scientific findings are made years before, but remain in the domain of specialists until the Impressionists help pull them into the mainstream. Once in the mainstream, however, it is the Neoimpressionists, especially Pointillists such as Georges-Pierre Seurat, Paul Signac, and Henri-Edmond Cross (whose Landscape in Provence, from 1898, appears above), who consciously take scientific findings and try to apply techniques in paint to take advantage of those findings. Joining theory with practice, the Pointillists “indisputably eliminated the disadvantage of subtractive, that is dark and dull-looking, color mixtures, through the use of pure colorism” and “attain a hitherto unprecedented luminosity,” the authors effuse. Rather than physically mix the colors on canvas via paint, the Pointillists facilitate the natural process of the human eye to mix colors optically. The human eye literally wants to connect the colored dots, so Seurat and others take advantage of that desire to achieve effects impossible with paint alone. 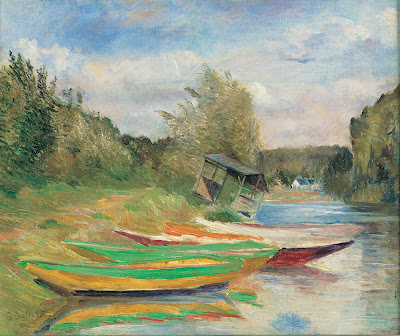 Gustave Caillebotte, Boats and Shed on the Bank of the Seine, 1891, oil on canvas, 46 x 55 cm, Wallraf-Richartz-Museum & Fondation Corboud, Cologne.

I confess to skimming through technical sections of most exhbition catalogues. The scientific rigor appeals to my rational side and the infrared and x-ray images lend of patina of hard science to the “soft” methodology of art criticism, yet I often find little purpose to all the gadgetry, as if someone wanted to “blind me with science” rather than open my eyes to something new in the art thanks to new technology. Painting Light makes the most of technological know-how and never loses sight of the big picture of bringing new insights to the well-worn tale of Impressionism. Schaefer et al cogently discuss the importance of color merchants in the lives of the Impressionists. Good suppliers of paint were pure gold to these artists. Art supply merchants such as Pere Tanguay and Paul Durand-Ruel not only appear in portraits by the Impressionists but also became their earliest dealers. Painting Light reveals how new innovations in tube paint, brushes, and pre-stretched canvas all helped make possible the image of the Impressionist as a wildly gesturing artist working in the open air and bound only by the borders of his imagination. “Even today, many pictures of the Impressionists display a bravura which would have been unthinkable without the flat-bound bristle brush,” the authors conclude. They also explain the financial realities of the time in which these artists needed to economize where possible when sales flagged. Thanks to infrared light, we can see the pentimenti beneath Gustave Caillebotte’s Boats and Shed on the Bank of the Seine (above, from 1891) showing the failed first attempt at painting the boats. Realizing that he had painted the boats too large, Caillebotte turned the canvas upside down, painted a skyover the first boats, and tried again, saving himself the cost of the canvas. Tales such as this bring a human element to the Impressionists many studies lack. 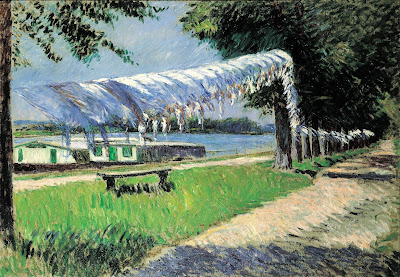 Gustave Caillebotte, Laundry Drying on the Bank of the Seine, circa 1892, oil on canvas, 105.5 × 150.5 cm, Wallraf-Richartz-Museum & Fondation Corboud, Cologne.

In another Caillebotte painting, Laundry Drying on the Bank of the Seine (above, circa 1892), the authors point out a poplar bud embedded in the paint—proof that the artist stood close enough to the poplars shown in the painting to have them physically seed the work itself. With their move to the outside, the Impressionists continued the work of the Barbizon School and “irrevocably eliminated the dominance of the completed work over the sketch,” the authors believe. Schaefer et al discuss in full the pleasures and perils of painting en plein air, which range from sand finding its way into seascapes to Cezanne’s death in 1906 days after being surprised by a sudden storm when working far from home. Again, the physicality of these artists working with materials and under certain conditions comes across boldly in a way that most books fail to do. The authors even bemoan the practice of reproducing paintings without frames, which they see as part of the author’s intent. After reading Painting Light, you’ll never look at an Impressionist work in a museum the same way again. 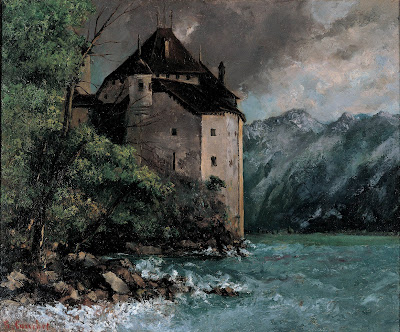 Painting Light contains countless insights and dispels many cherished myths, such as the myth that a “true” Impressionist work was done outdoors. Gustave Courbet’s recognizably Impressionist Château de Chillon (above, from 1873) was painted from a photograph, smashing that myth resoundingly. The most common myth shattered, however, remains the idea that we see these works today as the artists intended. Time has altered many of these colors, sometimes thanks to the inexpensive paints used by impoverished artists showing why they were inexpensive over time. Sections of a van Gogh protected by the frame from light reveal a brilliant red that once covered the entire work, thus throwing into doubt all conclusions made about his use of color in that work and all others. Examples of works cut or cropped or even “completed” by another hand will make you wonder just how much of your favorite Impressionist painting is actually by the artist. Painting Light brings these works back to life and shows us through science that everything we thought we knew about these works and these artists should be open to question. Painting Light makes art scientists of us all.

This is an excellent resource..Keep sharing..!

Yes, the resource is great, I agree with the previous comment! But I prefer http://www.proofreading-services.org, when something goes wrong with your article writing process!