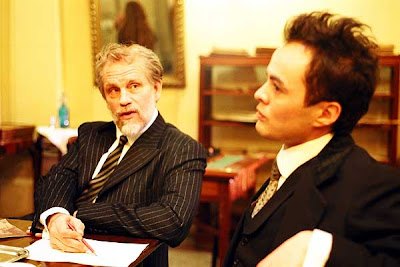 One of the downsides of being a completist and an obsessive about any subject is that you’ve got to work your way through a lot of dross to get to the gold. I’ve earned a few hours less in purgatory by subjecting myself to the cinematic hell titled Klimt. In that 2006 film, Raul Ruiz directs John Malkovich as Gustav Klimt in his final days, suffering in a sanatorium from the final mind-ravaging effects of syphilis and flash-backing to his glory days. Ruiz chooses to film from the perspective of Klimt suffering first from the effects of mercury treatment, which causes hallucinations and bizarre behavior. By asking us to buy into that choice, Ruiz plays into the very worst stereotypes of the mad artist tortured by an unreceptive society blinded to genius. I hoped that such treatments went out with the 1950s and Lust for Life, Kirk Douglas’ dated depiction of Vincent Van Gogh. Ruiz brings all that back, and painfully. In the very first scene, when Nikolai Kinski, son of the great German actor Klaus Kinski, appears as Egon Schiele, I knew things would go badly. (Kinski as Schiele and Malkovich as Klimt appear above.) Playing Schiele as almost dementedly jittery and frantic, Kinski continually poses like a Schiele self-portrait, distracting from all else. Kinski shows some of his father’s intensity, but he makes Schiele seem like Renfield from the old Bela Lugosi Dracula film. Such dehumanizing of these massively human artists into caricatures fails to serve any larger purpose of bringing their art to a larger audience. 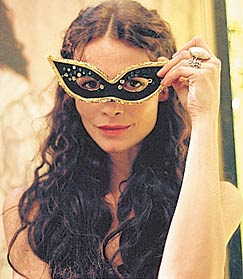 The only larger purpose Ruiz seems to serve in directing this film is to squeeze as much naked flesh onto the screen as possible. Saffron Burrows stars as the most, if not only memorable female paraded across the screen and plastered upon Klimt’s canvases. Unfortunately, any eroticism soon dissipates in the bizarre, confusing storyline in which Burrows is or isn’t a woman named Lea de Castro. Lea drifts through Klimt’s cluttered, diseased mind as an object of obsession, but it’s hard for any viewer or fan of Klimt’s work to find any interest in the proceedings thanks to the listlessness of both Burrows and Malkovich’s deliveries. Malkovich succeeds in making Klimt not only passionless but strangely dispassionate. Naked models offer themselves up to the master, who takes them in an almost workmanlike way. Watching these scenes of Klimt in his studio surrounded by a bevy of busty blonde, brunette, and redheaded models, I was reminded of the difference between nude and naked. In the paintings of Klimt, we see the nude female body portrayed in an almost spiritual fashion, the epitome of creation and the source of life. In the movie Klimt, all we get is naked flesh, as spiritless and pointless as a pornographic centerfold. 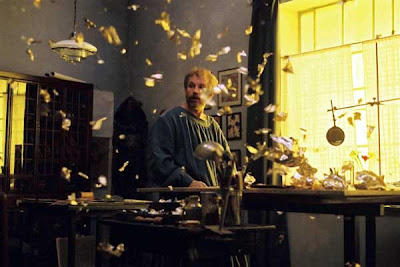 Ruiz spends precious little time showing Klimt actually painting. One of the few extended scenes of Klimt at work, delicately applying gold leaf to a painting, serves as just an excuse for a cheap visual when Klimt’s confidant Emilie Flöge (played by Veronica Ferres) intentionally slams the door to the room, sending the gold leaf flying into the air around Klimt like a glittering snowfall (above). Ruiz tries again and again to set up such near mystical visual moments in hopes of placing Malkovich and the other actors inside some kind of virtual Klimt painting environment. If only Ruiz had instead used more of Klimt’s actual work to set the mood and atmosphere. I watched Klimt right after seeing Goya’s Ghosts (reviewed here) and initially came away not sure which approach was worse: Miloš Forman concentrating on the external world of Francisco Goya or Ruiz concentrating on the internal world of Klimt. Ultimately, I felt that Ruiz made the poorer decision, deciding that interior worlds, however well representing in art, are always, in the end, inaccessible. Ironically, that unforgettable John Malkovich film, Being John Malkovich, should have warned Ruiz of such dangers. Malkovich could have at least reminded him, if he wasn’t so busy being, well, himself. 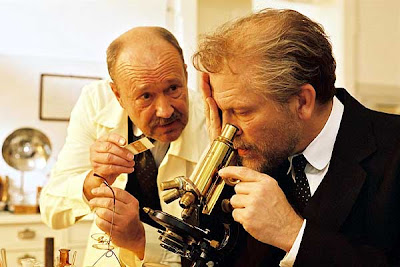 I’m a huge fan of Klimt’s work and time period, yet I had to work overtime to identify many of the characters. Ruiz assumes a knowledge of Klimt’s world far beyond that of mainstream audiences. Or maybe he didn’t think understanding mattered, especially when telling such an unintelligible tale. I found myself fighting boredom by counting all the missed opportunities. When Klimt visits Dr. Stein (played by Miguel Herz-Kestranek) for another mercury treatment (above), Stein allows Klimt to look through his microscope. In real life, Klimt looked at such tiny squiggles with fascination, borrowing their shapes as the backdrop for many of his iconic portraits. In Ruiz’s reel world, Klimt peers through the eyepiece with a blank expression and remarks upon what he sees with flat effect. Klimt the movie drains all the life from Klimt the man. I’m not a fan of Malkovich’s understated style of acting, but I think it’s especially inadequate for portraying an artist of such towering passion. Malkovich plays intellect, especially sinister intellect, much better, but there’s very little intellect either in Klimt the movie. Neither sexy nor intellectually stimulating, Ruiz’s Klimt disappoints and might actually make people learn to hate Klimt the artist, if such a thing were possible.

Yeah, I'm not a huge Malkovich fan either. I think his best performances were in "Dangerous Liaisons" and "Being John Malkovich". BUT: In the latter he was "playing himself". In the former, I just watched the French version of "Dangerous Liaisons" with Rupert Everett playing Valmont- it is so much better! And Rupert is, as ever, AMAZING. [sigh]. Plus, the sets and styling (1950's elegance) were superb.

What a bummer this Klimt movie wasn't better.