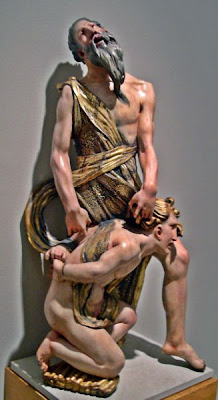 After the death of his father Pedro Berruguete, Alonso Berruguete questioned whether to follow in his father’s footsteps as a painter or pursue a career as a lawyer. Years later, when Berruguete died on September 25, 1561, many considered him the “Spanish Michelangelo,” the one artist more than any other who translated the Italian Renaissance into the Spanish Renaissance. Born around 1488, Berruguete’s rebirth and moment of epiphany came when he traveled to Florence and Rome in 1504 and saw the works of Michelangelo firsthand. Berruguete soon earned a place in Michelangelo’s workshop and learned at the feet of the master and befriended other young artists such as Andrea del Sarto and Bartolommeo Bandinelli. Berruguete trained as a painter with his father, but under his spiritual “father” Michelangelo, Alonso became a sculptor, creating years later works such as The Sacrifice of Isaac (above, from 1526-1532). Part of the San Benito altarpiece, The Sacrifice of Isaac shows the dramatic expressiveness of Michelangelo’s sculpture and painting that captivated the young Spaniard. Berruguete adds to the drama of the piece by painting the sculpture, adding to the liveliness and expression of the figures more than unadorned carved wood possibly could. 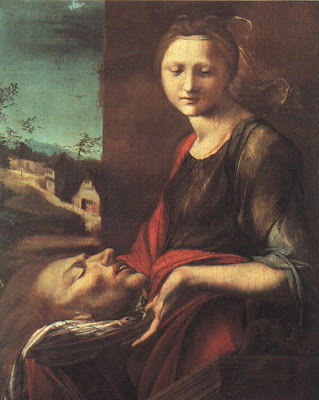 Berruguete brought Michelangelo-esque touches to his painting as well. In Salome (above, from 1512-1516), we see the young seductress looking down upon the severed head of John the Baptist. The bizarre calm with which she looks upon the head shows the influence of Mannerism upon Berruguete, who tried to amplify reality to the point of hyper-reality in pursuit of Michelangelo’s forcefulness of effect. Unable to match Michelangelo in technique, Berruguete resorted to other means to attract the same kind of religious fervor from viewers. Most of Berruguete’s works show episodes of great ecstasy or great agony, but Salome arrives on the scene after the fact—the calm after the storm of John’s martyrdom. Berruguete painted Salome at the end of his time in Italy, just before returning to Spain in 1517. In 1518, Charles V of Spain appointed Berruguete court painter and sculptor, positioning him to set the standards of taste for all of Spanish art.

It’s easy to see parallels between Michelangelo’s Dying Slave and figures such as Berruguete’s Saint Sebastian (above, from 1526-1532) from the same San Benito altarpiece that The Sacrifice of Isaac belongs to. Yet, Berruguete doesn’t just imitate Michelangelo’s art but extends certain elements of it, adjusting the settings on the drama just enough to create a difference but not set the entire work out of balance. With the official seal of approval of the Spanish court, Berruguete influenced an entire generation of Spanish artists who followed the example of Michelangelo and the other Italian Renaissance giants yet added their own subtle flavor. I look at this Saint Sebastian and imagine a young El Greco arriving years later from Greece, standing before this or some other work by Berruguete, and thinking, stretch the torso a bit here, extend the arms, lengthen the face… Alonso Berruguete’s wise career choice helped shape the direction of Spanish art for generations.